I know some of you who are reading this are not from Malaysia (or Singapore, or of Chinese origin), so do you know that after you give birth, there’s this thing called “confinement” you have to practice? In chinese it is called 坐月子.

And up until i got pregnant, i always thought confinement is one of the worst things a woman have to go through in life, because when i was a child i witnessed how my aunt went through it, she was practically a sweaty, smelly, zombie, in jail. And that’s when i decided i will never ever get pregnant when i grow up. (Obviously changed my mind haha.)

So basically the idea of confinement i had was this weak, pale woman sleeping in a no-aircon room in a sarong for one whole month, having not showered forever, eating the same ginger wine chicken over and over again, and basically being locked-up in the house for the entire period. Hence the term “confinement”. Western readers, does any of these make any sense to you at all?!

It didn’t make any sense to the danna. There’s no such thing as “confinement” in Japan, and all of the pantang larang (taboos) are unheard of. He laughed so hard when he heard that after giving birth Malaysian women are not supposed to wash their hair for one month. He told me if that’s the case then i’m not allowed to touch or go near the baby, which when you think about it is indeed mad filthy and unhygienic (sweat-filled dandruff on your newborn’s delicate face and kutu, anyone??).

Since there’s no “confinement”, there’s also no such thing as “confinement food”, or “confinement lady” (陪月婆), or any sort of confinement rules (cannot drink plain water must drink ONLY red date juice!). Japanese woman just carry on with their life as usual after they deliver their babies. PLUS doing all the household chores and taking care of the baby themselves. I don’t know these superwomen do it. Now i just think Malaysian moms are waaaaay too lucky and spoilt.

So then i was torn. All my friends and relatives were asking, “so have you hired a confinement lady?” (no.) “then who will cook the confinement meals for you?” (Confinement meals? What confinement meals.) “So you won’t wash your hair for a month right?” (Moms from every other part of the world wash their hair every single day and they are fine). “NO NO NO THEY WILL GET SICK WHEN THEY ARE OLD AND REGRET FOR THE REST OF THEIR LIFE“.

It was driving me insane.

I am a Malaysian and grew up with all these weird traditions and superstitions, but now the danna told me it’s all nonsense. Then my mom asked me to respect the 5000 years of Chinese wisdom. Then i told her none of the Japanese moms did any sort of confinement yet some of them live the longest and healthiest in the world.

So i won. All your arguments are invalid.

At one point i decided to simply disregard this whole confinement thing as it is ultra confusing and troublesome and stressful.

But still curious, i wanted to study more about it, so i went to a Mother’s Day event by Daveleen which focused on this whole “confinement” concept to find out what it is all about by myself. 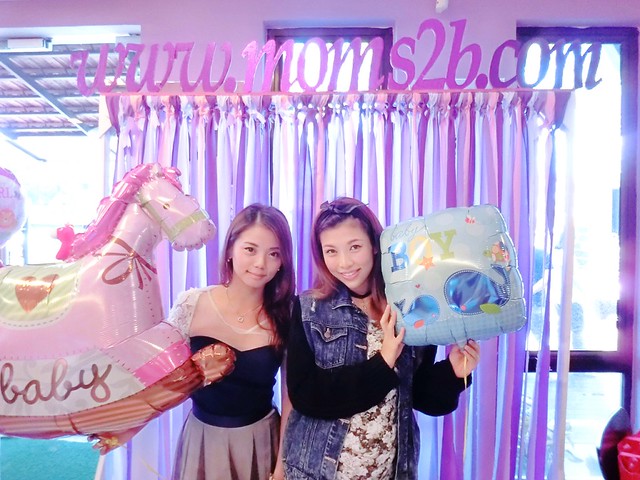 It was a party/workshop for expecting moms, and there were many many couples there, they all brought notebooks and pens and looked dead serious and determined to perfect their knowledge of confinement. 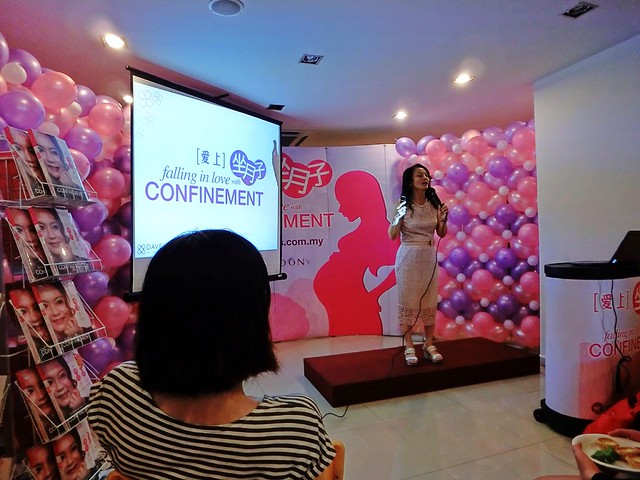 The speaker was Dr Peiling, a confinement expert, famous with her book “爱上坐月子” or “Falling in Love with Confinement”. It was an eye-opening 1.5 hour of insight on confinement. I can’t possibly list down everything she said here, but i was very very glad i attended the event. I think everyone there did.

In short, she debunked most of the myths and taboos we were made to believe for decades, with supported scientific explanations. I was very surprised to see some expecting moms getting super stressed over the contradicting beliefs, asking Dr Peiling endless questions about how their moms or MIL said you are not supposed to eat vegetable in general/frozen food/use raw (unboiled) water to wash hand, and must drink a lot of Dom/Martell etc etc etc. Dr Peiling answered them one by one until everyone was satisfied.

I loved how she made this whole “confinement” seem so carefree and easy. She herself said that it is supposed to be an “enjoyment”, although the term “confinement” carries so much negativity in it. And she also mentioned that a lot of times it’s all in the mind: if you eat a piece of lotus root (which your grandma forbids you to) after childbirth and feel guilty about it, you are bound to feel unwell physically too. If you don’t believe in it, then it is not going to affect you. How true! 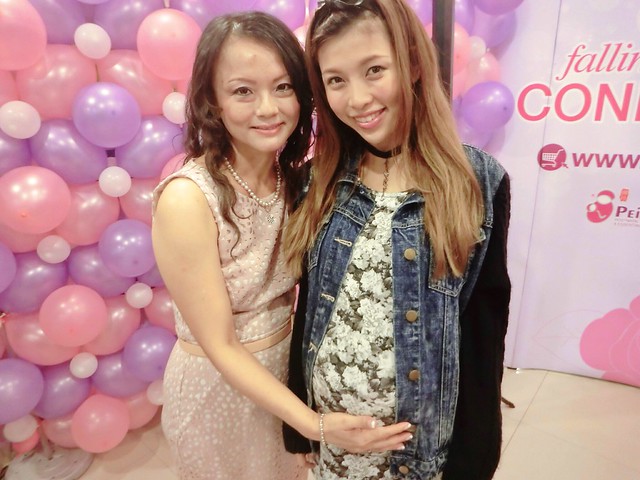 With Dr Peiling. You can check out Dr Peiling’s FB page www.facebook.com/drpeiling to get more tips on confinement! 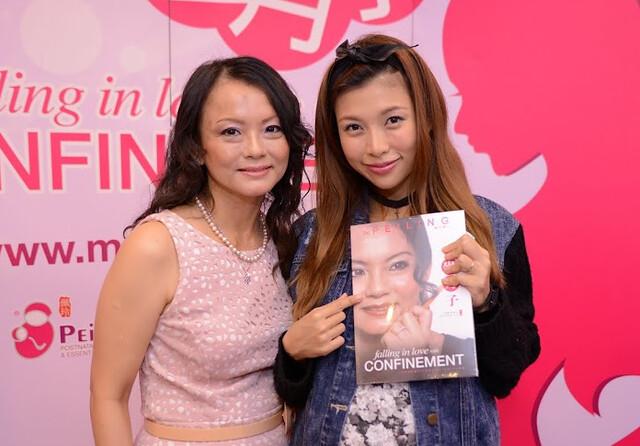 “Falling in love with confinement”. 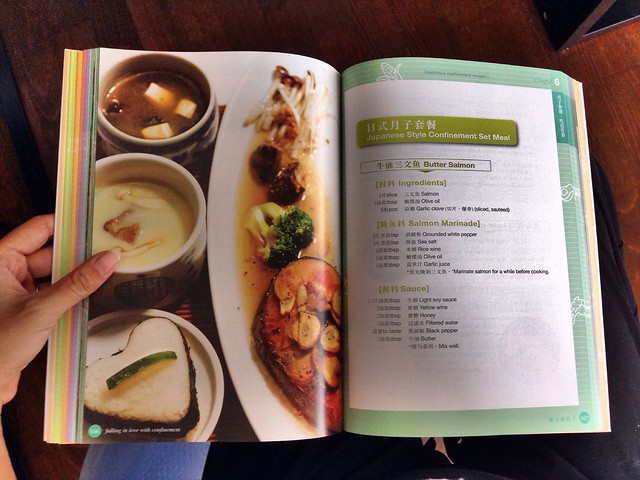 So i got her book, and read about the modern way (hello guys it is 2014 now) of doing confinement,  and was surprised to see that it was full of modern confinement recipe, including Western and Japanese meals!

Also after the event, i have come to an important decision.

Between the traditional serious business Chinese “confinement” which many many many of my mommy friends were super stressed over (and followed because “no choice”), and the happy-go-lucky angmoh way of doing it (yay go to the beach with newborn baby right after being discharged from hospital!), i think found a balance.

After all, i am living in Malaysia now. And following some kind of tradition would make my mom very happy.

So here’s the perfect confinement idea:

2. Won’t allow myself to get stressed over what other people tell me to do/not to do.

3. Have the whole confinement preparation ready by now. Without hiring a confinement lady (i will likely end up getting stressed over having one wtf).

What’s one of the biggest concern during confinement? What to eat. And How to Pou (补).

I’m so so glad i discovered this!!! 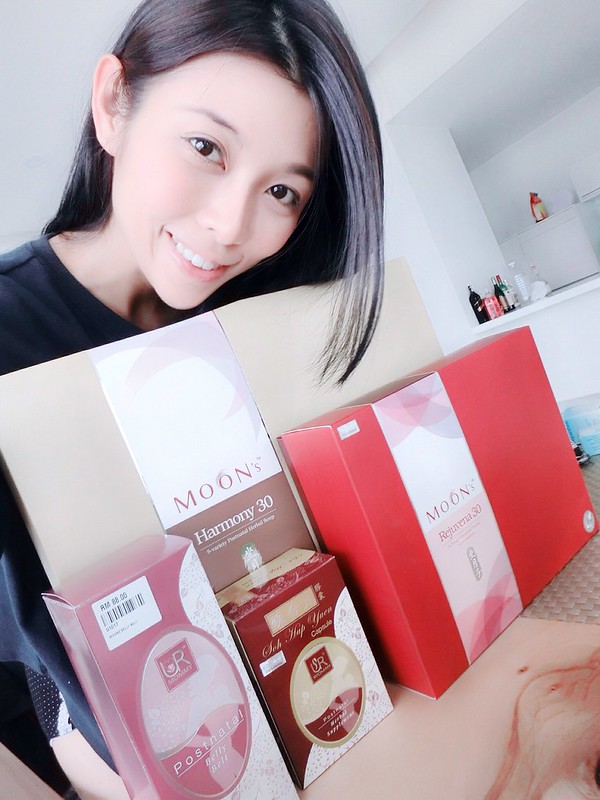 Why didn’t someone invent this earlier! No more yok choi pou (TCM medicine stores) visit and getting stressed over what herbs to buy, when to eat and how to cook. I think it is genius.

Since there are so many conflicting teachings out there anyways, your mom and MIL and grandma and your confinement lady are likely to all have different opinions. Eat a lot of ginger! No! it will cause jaundice in your baby! Drink a lot of yellow wine! No! Alcohol is bad for baby! No wonder some mommies go crazy. I would rather just leave it to the expert and follow it through. 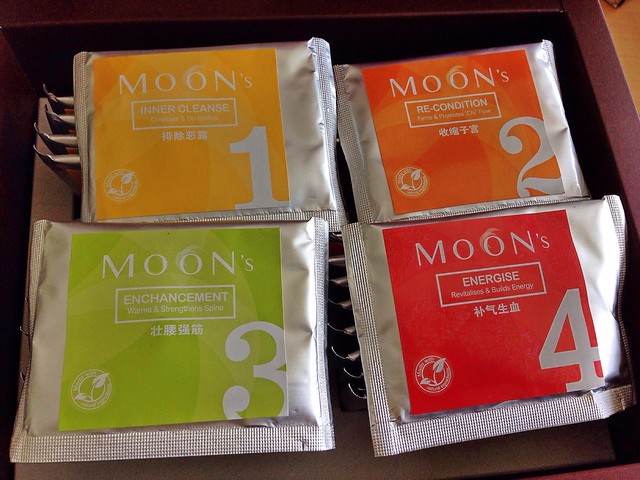 In Moon’s Rejuvena, a postnatal herbal supplement has exactly everything you will ever need for the entire confinement, it even has a sequence (inner cleansing, re-condition, enhancement, energise) for you to consume accordingly, and the best thing is no more double boiling herbs every single day. They all come in sachet and you just need to add it in warm water and take it every day. Simple? 😀 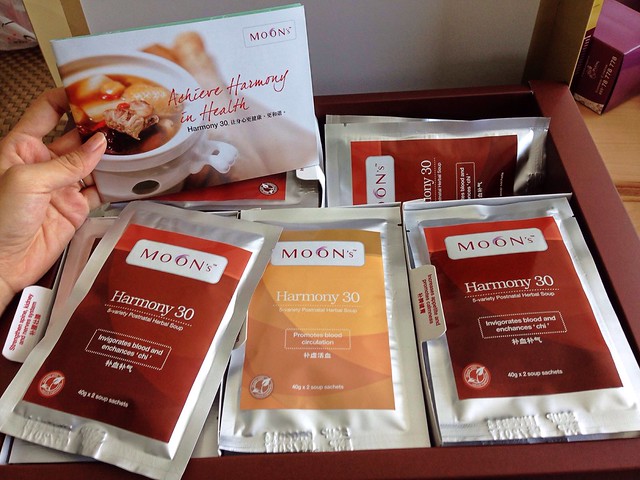 This is a postnatal herbal soup that comes in 5 flavors, apparently you can just boil and drink it on its own! Super super convenient! Of course it also comes with a recipe if you like it more flavored. 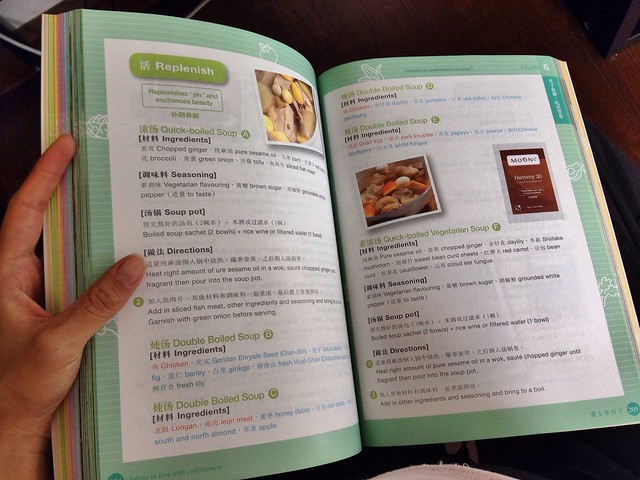 All the herbs in Moon’s products are approved by MOH for safe consumption, and processed with advanced technology for quality, hygiene and safety. Which i would totally choose over raw herbs because nowadays it is quite hard to trust “genuine herbs” coming from certain countries (where a lot of stuff are fake?), and of course it is also easier to store, prepare and consume. 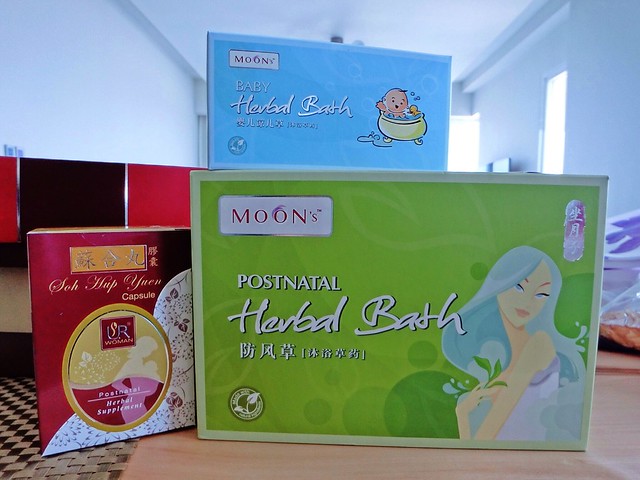 Other than the two star products, Moon’s also has D’Wind, the famous Soh Hup Yun to expel “wind” which seems to be the biggest concern among Chinese moms. Also herbal bath during confinement for mom (if you choose to shower lolol) and even herbal bath for your baby. 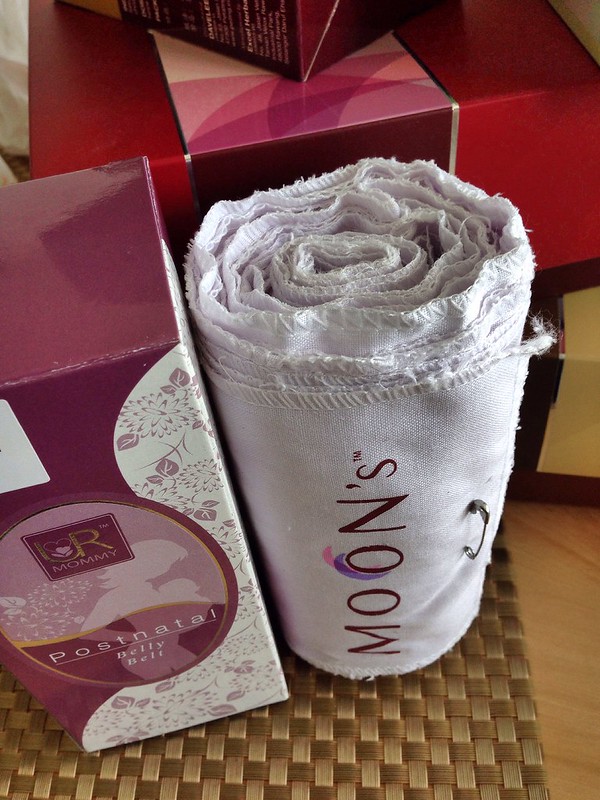 Another must-have is the Moon’s Postnatal Belly Belt!

There’s a certain special way of tying the belt, which goes up to only slightly above your uterus, unlike the traditional “bengkung” or corset which goes all the way to your waist below your bust. And the reason is because you need to give your stomach space to take in food and also to breathe. True!! I tried corsets before and it just made me nauseous and breathless and a complete loss of appetite. Not to mention new moms need to eat lots to produce quality breast milk. So no bengkung/corsets in the beginning!

With all these things ready in my kitchen/bedroom, i am quite confident i am going to have a pretty easy “confinement”. If you call it one. When i texted my mom about the things i got she texted back in delight Good lah! I don’t need to worry about buying this herb that herb! Nowadays so convenient liao ah!! Lolol. 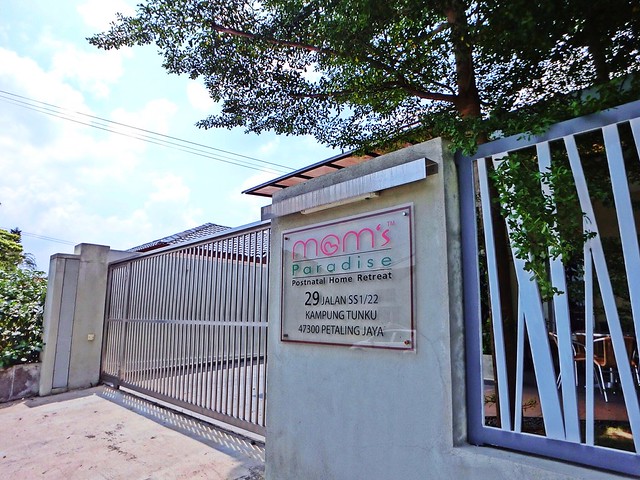 The center is at SS2! 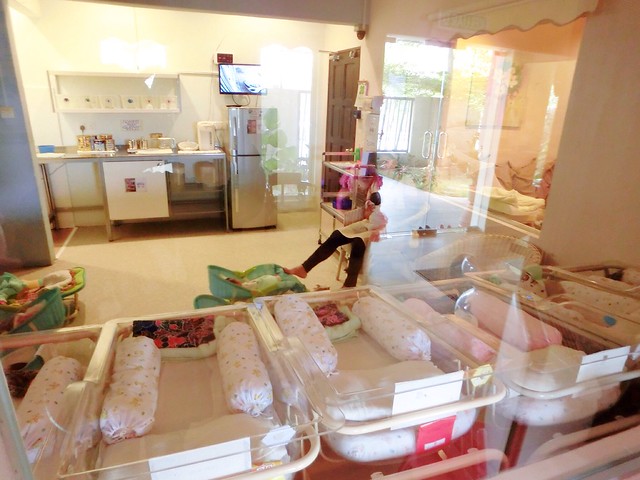 For those who couldn’t get a confinement lady (if you need one), or don’t have anyone to help out, they can stay at Mom’s Paradise during their entire confinement. It’s like a honeymoon after delivery lol. Someone will cook you 5 nutritious meals a day and take care of your baby 24 hours!!! 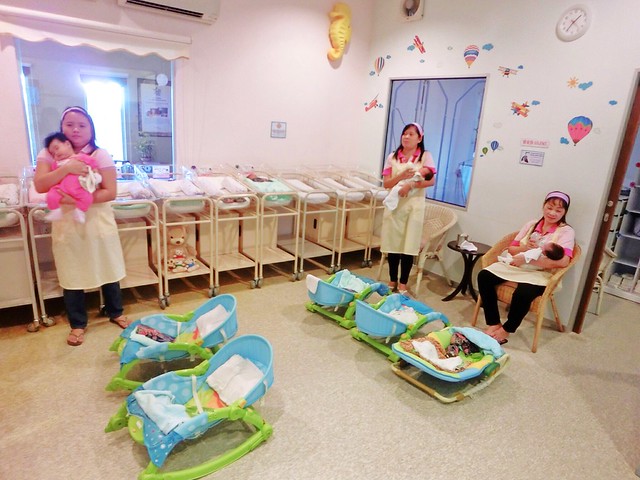 The nursery with well-trained nursemaid. 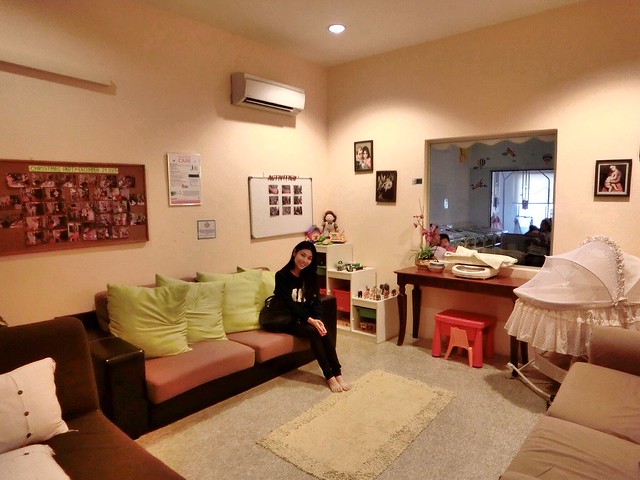 Also, Daveleen provides confinement lady if you ever need one (but must book early!), and even Mom’s Delight, which is a confinement food delivery!

I was honestly very impressed by how convenient they made the whole confinement to be, and seriously i’m just so glad i live and am giving birth in 2014 where everything seems so easy and stress-free!

So for you expecting moms, do check out Daveleen’s website:

There are many many more things they have that i haven’t even covered yet! Have a great confinement! 😀

Anyway! For those of you who have done/will be doing confinement, how was your experience or how are you going to practice it? Do share!