When I wrote the last blog post of 2017, I did ponder a lot about what my 2018 new year resolutions would be. It turned out that most of them are the same as the previous years – that I want to cook better, maintain a healthier lifestyle, travel Japan more… etc. Mostly family-related. Basically I want to be a better mom and wife and myself!!

And then I thought, what about work? What about this blog? Does it still matter in my life? Yes I want to make effort to keep it alive, but what’s the future? … bleak. So bleak I want to offer it a blanket, some pizza and a hug.

Honestly, I was at a loss, because I thought I had lost my vision as “Cheesie the blogger” (social media influencer, whatever. I still cringe at this title until today). 10 years ago, I wanted to be more famous. I wanted more job opportunities. I wanted to earn more money from blogging. I wanted to win award titles.

Blogging/social media is not what it was anymore. While most of us here still spend a copious amount of time on our smartphones, social media fatigue is real. Both marketers are audience are getting too overwhelmed with too many things happening. It’s also wearing me out so much. I feel that I don’t have the energy to catch up in this competitive game anymore.

Frankly I am really impressed with the new generation on social media with their meticulously curated feed, mesmerising travel shots, every-changing gorgeous fashion, perfect lighting and angle, flawless everything… I always wonder, exactly how much time they spend to get that perfect shot?? (I barely have time to breathe) Where did they get their pretty clothes from? (My entire spending goes to the kitchen, not my wardrobe) Who takes those shots for them??  😮 (Tripod and timer does mine, by the way. Not that you are really interested hahahah.)

And very very frankly, I don’t think I can ever reach their level even if I try. I will just look like I’m trying too hard haha. I’m not even capable of taking selfies nowadays HAHAHHAA I’m not even joking. It just looks… wrong. And awkward. 😳 Then I thought, when it comes to popularity, this is then really true: 长江后浪推前浪，前浪死在沙滩上. (Back wave push front wave, front wave die on beach lolol. Basically new talents superseding the old la.)

I, as this very old wave, should probably just chillax on the forsaken beach, slowly let myself seep under the lonely sand until I evaporate from this world haha.

Feeling powerless at the thought of my impending demise, it got me thinking about the meaning of “influencer”. What exactly do these people do, “Influencers”? Yes they are people who have the power to influence others. But to influence what? To get people to buy products? To drive sales for brands? Is that all?

Of course not. Influencers do a lot more. When I watched what Logan Paul did during his trip to Japan (I don’t even want to talk about the suicide forest incident here), I thought that social media is becoming quite sad and hopeless. I mean, many people had to resort to something as obnoxious as this to make it somewhere these days. If doing this means you stand a better chance at becoming the next millionaire superstar with crazy fans echoing every word you say and worshipping every step you take, then I really have lost faith in the internet and maybe the new generation of human. I’ll retire to a farm in Japan to plant daikon.

I had no idea where this social media thing is going anymore. To prank or scandalize people is the last century of blogging. But I did not like the new social media that I am seeing very much. So self-entitled, lack of gratitude and common sense even. Suddenly I feel like a grandmother in the 90s who shook her head at the magazine shot of Christina Aguilera’s ultra low-waisted, side-slit skirt and belly tattoo lol. (I loved it so much she was my 女神 ok lol. “Come On Over baby” is still my all-time fav MTV) Ah. So that’s how it felt like.😂

I gave a long, hard thought about this. What do I want, and what can I do?

The only thing I do know is that I want to do something where I could pour my heart into, be sincere and passionate about it, and enjoy it at the same time. How do I carry on doing this for the years to come?

And then I finally had my answer.

The only way to move forward, is to be of use for someone.

誰かのためにやる. That’s the key to success. As the danna would always say.

One loses his vision if he’s not doing it for someone else. As he would always say.

If you are only doing it for yourself, it will never bring you far. As he would always say.

Which is why my husband is always my bodhi tree. When in doubt, I just need to go sit next to him to be enlightened lolol.

That’s how I had a new resolution for year 2018 regarding my ebbing social media life.

I am going to make myself useful.

(Like, before you die, you give all you have to redeem yourself haha.)

How do I do that? By sharing what I find useful for myself.

It may not be life-impacting ideas or knowledge, but in many many small little ways, I believe I can influence for the better instead of showing people how you are able to throw an octopus on a taxi. To be of help for someone. Even just one person. It could be you. It could be anyone.

Which is why as a starter, I created #CheesieApproved on my Instagram Highlight, a feed where I recommend my personal favorite items (which are mostly also approved by some of you who have tried it before! Double approval! Haha).

It all started when I was so delightfully amazed by my new Hitachi Washer+Dryer that I purchased for our home in Kuala Lumpur. I couldn’t contain my excitement. It was too good not to share. I was sighing at how high-tech, convenient and life-saving it is for a busy mom like me, but at the same time I thought nobody was gonna care what this 黄脸婆 is yapping about. It was a shiok sendiri moment. 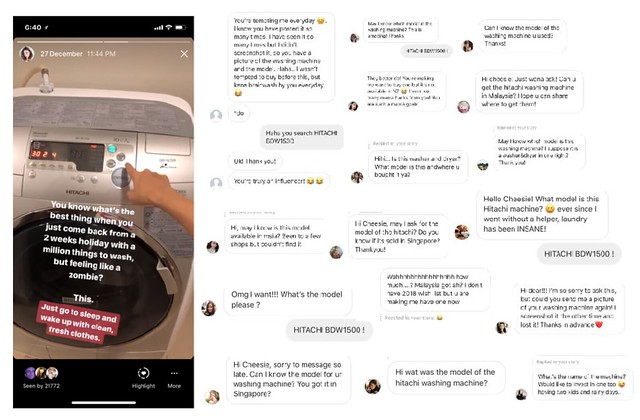 But I was so wrong!!! Many many many people (like over a hundred!!!) responded to ask me what the model was and where they could get one. Omg you guys are no less aunty than me hor HAHAHAHHAA. At first I answered one by one but it was getting too much. Once the story expires someone would ask me to re-post again. Every other day I get new messages about it.

That was when I thought, I am too, influencing many many people’s lives in ways I did not know. I realized a sense of responsibility as a “social media influencer”.

I started to think about how many products I have promoted in the past that my followers have excitedly purchased because of my recommendation, and whether they found it truly useful, or utterly disappointed?

I am not going to lie, when I was attached with agencies years ago, it wasn’t a norm to reject projects that you are given. I accepted whatever I am offered. On hindsight, I have indeed promoted many, many products that I did not even personally use, or know much about. I was given a posting guideline, took selfies with the product, rephrased the pointers and published it on my blog, then get paid for it. I saw nothing wrong about it because there were just an “ad”. Just like commercials you see on TV and editorials you flipped through on newspapers. Nobody will sue the TV for promoting a fizzy drink that tastes like crap.

However these few years I found myself more and more careful with sponsored postings. One of the reason is that a few times I spotted many individual online resellers using my photos from previous engagement with other clients to promote the products they were selling, using captions like “Cheesie也爱用我家的产品哦”, or even misleading titles like “Fairer skin in 1 week!! which was untrue. It’s a bit of an exploitation already. Now that they made it look completely like a dubious beauty product, I felt a little ashamed that I did not filter my choice of products properly. And to be honest it is really, really hard to promote beauty products because the results are often very subjective and you may not see any effects for weeks. And then there were also angry customers who left comments on my blog about the bad service of certain online stores. While I felt bad for them, I still thought it was not really my daiji because it was out of my control?

I was ignorant. I realized how immensely heavy my responsibility is in being more selective of what I promote. It could make or spoil someone’s day.

So, this year, I am making myself a promise: I will only recommend something that I genuinely like. Be it paid, sponsored, or not.

I used to think that if I am not paid for something, I will never give it “free publicity”. A fellow blogger once told me that she will never promote her favorite restaurants because she worries that it will get so popular that she will never be able to reserve seats for herself anymore. And that I should also not do so because I would be “spoiling the market”. I naively believed that it was the way to uphold my value as a blogger. Because once you start promoting for free people will never pay you anymore. Now that I think of it, it was seriously a “lu xiong lu jin dua kih ah” (who the hell do you think you are) moment haha. Also at one point I was one of those influencers who tend not to share their “secrets”, like cameras or editing tools they use, fashion or accessories etc, so that they could always remain mysterious and unique.

But it is 2018. The world is an open book. People are voluntarily uploading fantastic recipes to share with the rest of the world. Because that’s the only way to move forward – to share what you love. And as cheesy as it sounds, because sharing is caring.

You know, when I receive feedbacks from my readers telling me that something I have written or shared have helped them in some way, it is really the highest happiness I could get from this whole blogging experience.

But anyway I still have to put disclaimer here that all things I recommend is only approved by my very humble brain and heart. You see sometimes I may find a rice cooker so amazeballs but there might also be someone who totally wanna hurl it at the wall (although I highly doubt so HAHAHA). But if that really happens, please forgive me, I think we will just have to agree to disagree, and that maybe we really are 吃不同的米长大的 (grow up eating different rice) LOLOL.

That’s all for today. So since I have created #CheesieApproved, perhaps it’s your turn to share which of it that you love/find useful, so that in return we could share it with even more people? Let’s create a happy sharing loop!!