I’m so happy that all the less prominent prefectures in Japan are making their presence known here in Malaysia!

This time around we have the Mie prefecture to launch their special “Taste of Mie” special menu in collaboration with Sasagawa Authentic Japanese Restaurant in Sheraton Imperial Hotel KL.

Sasagawa is always one of my favorite Japanese restaurants in KL, and to be honest i don’t have many favorites. The biggest reason is that they are truly authentic, i could see the effort and zero-compromise when it comes to food quality.

They may not mention it in the menu but most of their ingredients, including vegetables and even garnish are air-flown from Japan! One day i had an eggplant that was so good i asked if it was Japanese-grown egg plant. The answer was of course yes. Apparently all the fresh produce is imported 4 times a week from Japan, this is how committed they are to Japanese authenticity. 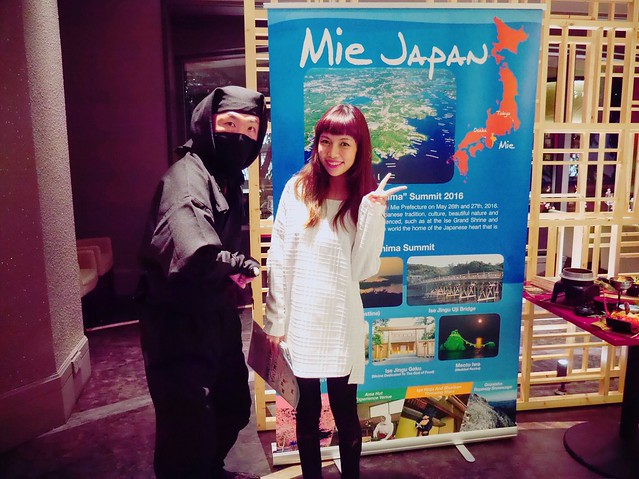 No effort was spared when it comes to the introduction of Mie, a prefecture situated in the center of Honshu. A Ninja hijacked our dinner and explained that his hometown, Mie, is indeed the original birthplace for the Japanese traditional martial arts, Ninjutsu. It’s also home to the Ninja Museum, so if you are into that kind of thing, don’t miss the chance to dress up as one and have your bucket list checked.

I have been to Mie once and i know it because of Ena Matsumoto (ex EMODA producer). Mie is her hometown and she told me that she often visit Ise Jingu (Ise Shrine), probably one of the most famous power spots in Japan. A Japanese psychic once told me that she felt the strongest spiritual presence in Ise Jingu. I am dying to visit Mie again. I mean, if Hakone Shrine gave me two babies, who knows what kind of wishes the Ise Jingu Gods will granted me????

Back to the food!!

So we were in for a tantalizing treat that day featuring many fresh ingredients from Mie Prefecture. 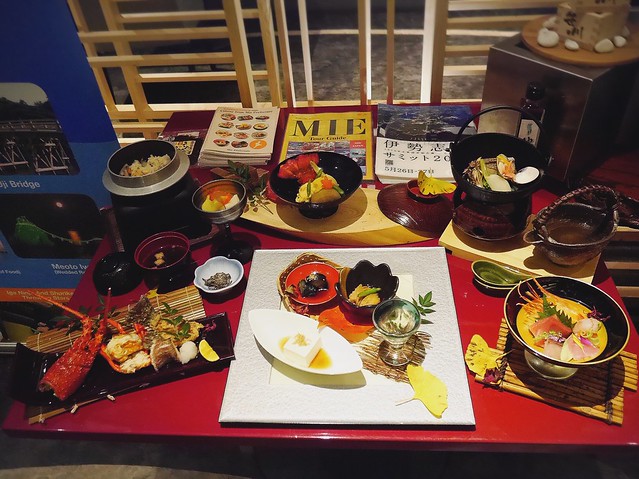 This the the full course meal. 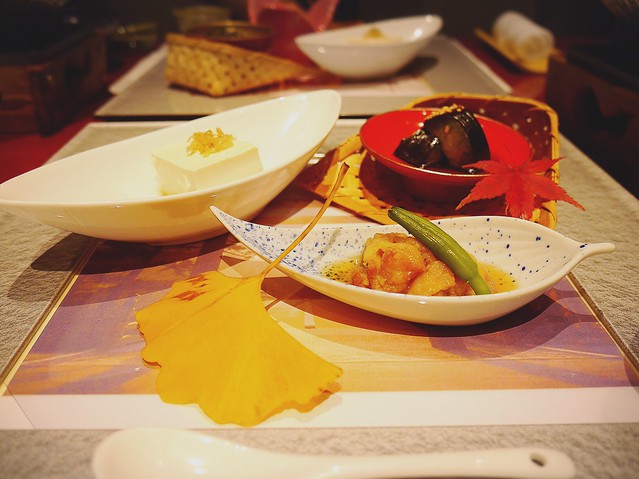 First up there’s the Setouchi Bitter Tofu with Yuzu dressing, fried greenling fish with Kinshinsai (a really novel vegetable to me that tasted sweet and very pleasant), and autumn eggplant with sesame cream.

Fresh ingredients aside, i truly enjoy the dashi that comes with the dishes and i slurped up the last bit of it. 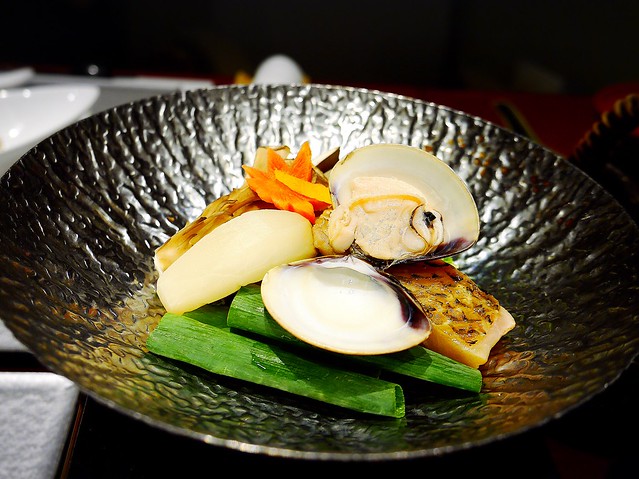 Second dish was Mie’s clams in clear soup. It looks like your usual Japanese hot pot, but the humble piece of fish that is not named (i later found out that it was called Nodoguro) has wowed me to almost wanted to ask for a second helping. The rich dashi soup was gently warming to the belly. 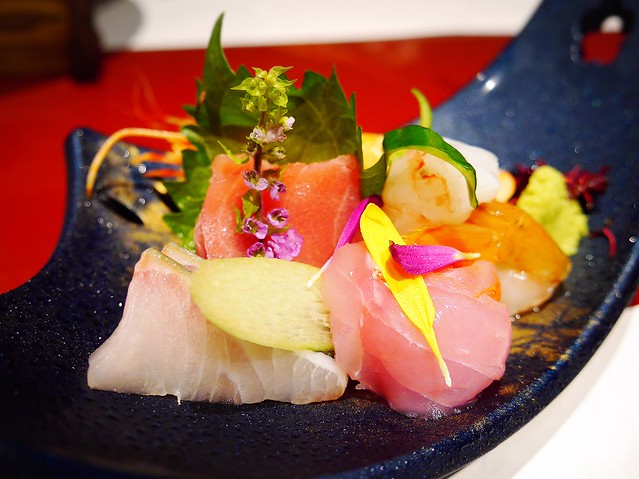 Fresh sashimi of the day, there was kinmedai, ishidai, ootoro and a juicy big ebi! Look at the beautiful medley of colors!! My eyes enjoyed it just as much as my happy taste buds. 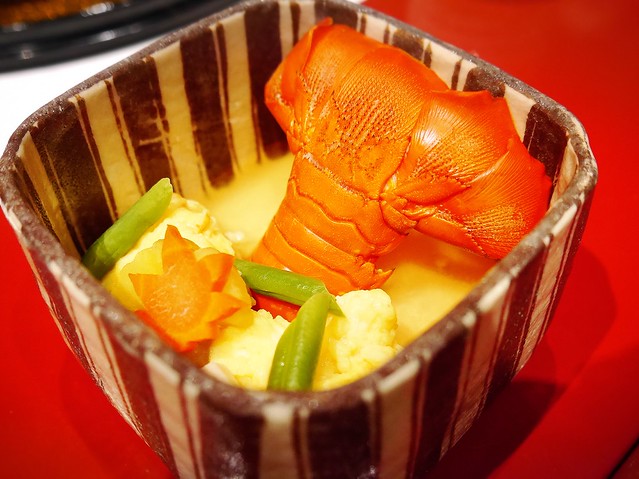 And then there was the simmered Ise Ebi in egg broth. Which is just a teaser to what’s coming up next. 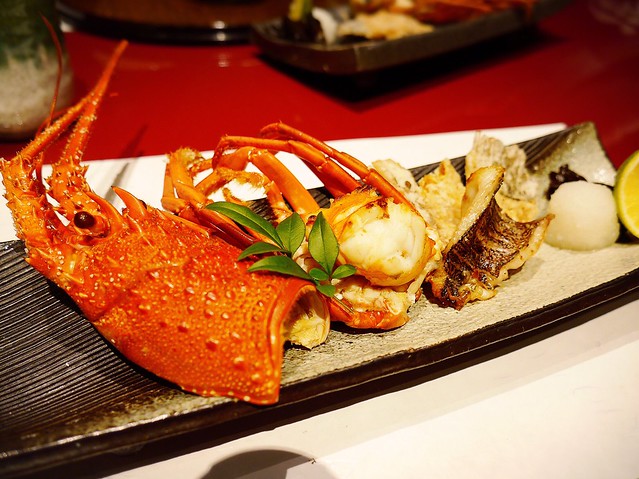 The nationally famous Ise Ebi (huge like a lobster!!!), flavorful with great texture, served together with Scorpion fish deep fried to a crunchy finish where you can eat even the bones and tail. Super yummy. 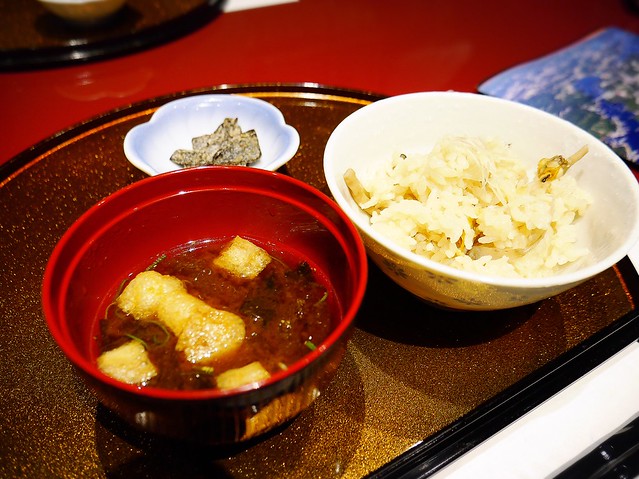 No Japanese course meal can end without pearly white rice and a bowl of steaming hot comforting miso soup. Today we have Kamameshi boiled with Mie’s clams, served with Fukusa Miso with sea lettuce, and also Shio Konbu (salted kelp) which is guaranteed an umami bomb to go with your rice. 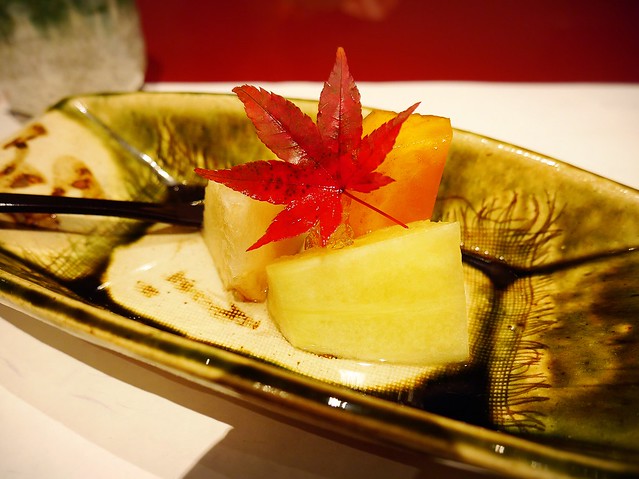 Lastly there’s the seasonal fruits, the autumn persimmon, Japanese pear and Japanese melon that is truly the perfect end to a great meal.

You can enjoy this special “Taste of Mie” course meal at Sasagawa Authentic Japanese restaurant for RM300 until end of the year!!

Time for my pledge to support Tohoku! 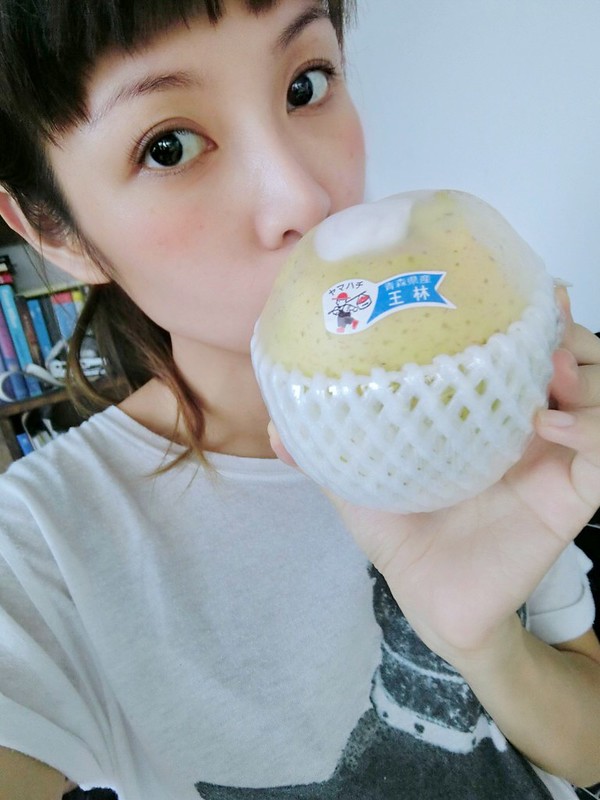 First all all there’s the Aomori Apple, Ohrin, which is yellowish green in color and somewhat resembles a pear!! It is an aromatic, juicy, honey-flavored with almost no tartness, so it’s perfect for people who likes pure sweetness to their apples. 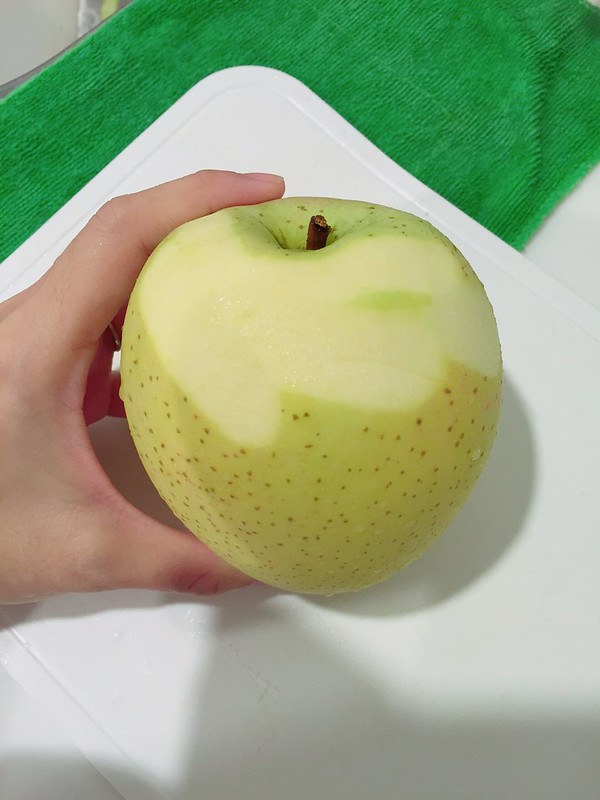 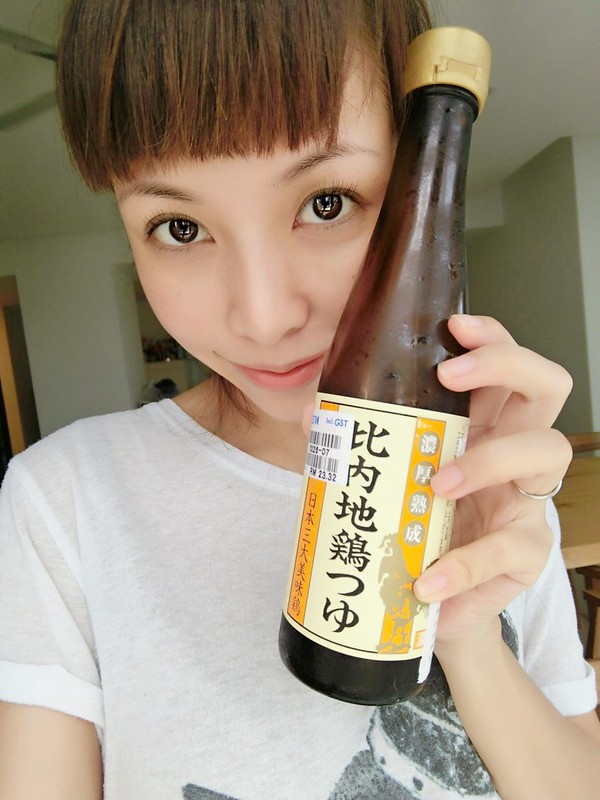 Then i bought a very flavorful Tsuyu which is made in Akita. Usually Tsuyu is konbu and katsuo based, but this one is made from Hnai Jidori (Hinai chicken, which is similar to the Malaysian kampung chicken, but Japanese quality).

Hinai Jidori is a protected species as one of the top three locally-bred chicken in Japan, and has been grown mainly in northern Akita through the ages.

Akita Hinai has very flavorful and savory meat, so it is perfect for soups. And this bottle of Tsuyu is like the essence of Hinai chicken, i use it for gravvy and basically every dish that needs that extra boost of flavor.

Since Hinai Jidori is from Akita, it is indispensable for Kiritampo hot pot, one of Akita’s specialties. 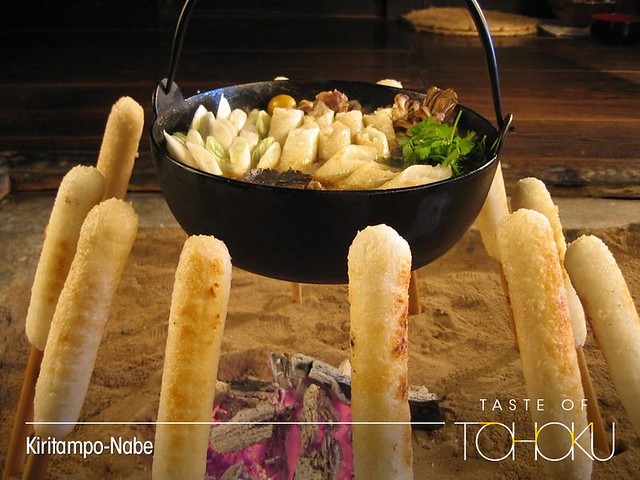 I have not try it before, but it is probably Akita’s most representative dish. It is said to have originated from a recipe of Matagi bear hunters living in northern Akita, who pounded remaining rice they’d carried, wrap it around a stick and bake it over a fire. They had kiritampo in a hot pot with vegetables like leek, Maitake mushroom, Gobo and of course… Hinai Chicken.