You now know that when one says Itadakimasu, one is humbly expressing his gratitude to mother nature, and everything that brought the meal on his plate. And when you feel thankful for your food, naturally you will want to savor the very last bit and not waste any of it.

And that is the concept of Mottainai, which closest translation in English is “wasteful”.

But just like itadakimasu, there is a much deeper meaning to that. Mottainai expresses the feeling of awe and appreciation for the gifts of nature or the sincere conduct of other people, and to show one’s gratitude, you will use/consume something in its entirety.

Let me give a few scenarios that i experienced in Japan.

So to continue from itadakimasu, you express your gratitude sincerely by finishing your food, down to the last grain. Literally. The danna used to peek into my rice bowl and tell me that i am not a “clean eater”. You know sometimes a few tiny grains of rice are stuck to the bowl which you failed to pick them up with the chopsticks? That is not acceptable.

As i have mentioned before in this post, some restaurants in Japan will fine their customers for not finishing their rice.

This is a fish restaurant in Shibuya, one of my favorite. There’s a notice that says that you will be fined 500 yen if you leave rice uneaten in your bowl. It’s not that the restaurant is an opportunist trying to make more money out of wasteful customers. They provide free rice and soup refill for big eaters. The danna always order 2 or 3 bowls lolol. But they wanted to remind their customer of the Mottainai virtue.

Rice has a special place in Japanese culture, and wasting it is several levels worse than wasting any other kind of food. If you are a small eater, please let the staff know that you want less rice when you order. No wastage is tolerated.

Japanese people try not to waste any food to quite an exaggerated manner. I go on endless food adventures in Japan, trying things i’ve never tried before, sometimes to the dismay and disbelief of some people who are not familiar with Japanese culture.

Many people think that Japanese people are disgusting for eating all these stuff only the wild carnivores will devour in their fiercest beastliness. Remember the crying raw squid eye i was forced to eat? Yeap. But it all comes from the concept of mottainai.

Since the living has sacrificed itself for our well-being, we will try not to waste any part of it that is edible. I’m not sure if in ancient time someone was assigned to do the eating trials and erros (“Well, i’d say we take the gizzards and bones, and nope, the feather and beak didn’t really go so well with daikon”), but i must say that they made things that i could not even imagine eating taste so. damn. amazing. In the end, it is all about effort. You say colons taste like shit? CHALLENGE ACCEPTED. LET ME TURN IT INTO A MICHELIN GOURMET.

Speaking about that, have you tried Horumonyaki? It’s like Yakiniku (Japanese beef BBQ), except it’s all about the insides. Well, isn’t that what they taught us about beauty?

Did you know? Horumon, which i thought was a translation for “hormone”, is actually “horu mono”, a Kansai dialect that means “parts that are thrown away”. 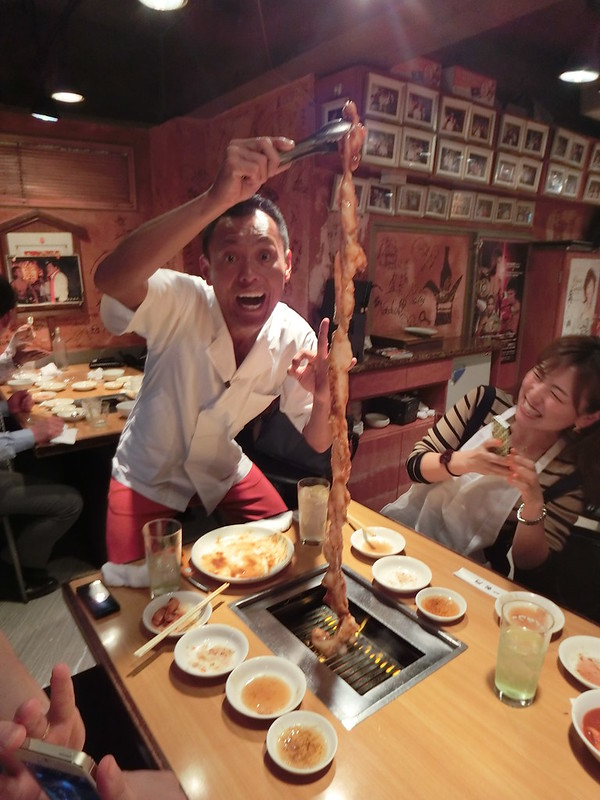 (At one of my favorite Horumonyaki specialist in Tokyo: Meimon)

But guess what? Even the parts that are supposed to be disposed made it onto the table. Proudly. I freaking love Horumonyaki.

Mottainai can also be used to describe things that are too precious to be used in an imperfect way. I always buy my beloved Mentaiko from ISETAN, take the sacs out and separate them individually with cling wraps, and store it in the freezer so that i can use only what i need.

Sometimes i will ask if the danna wants to eat Mentaiko pasta, but he will tell me “Mottainai”, because he wants to savor the full flavors of it by having a small cut, just on its own, on top of a bowl of hot rice. Rather than it being dissected and tossed into shoyu, mayo and hot butter which makes it lose its most original essence. 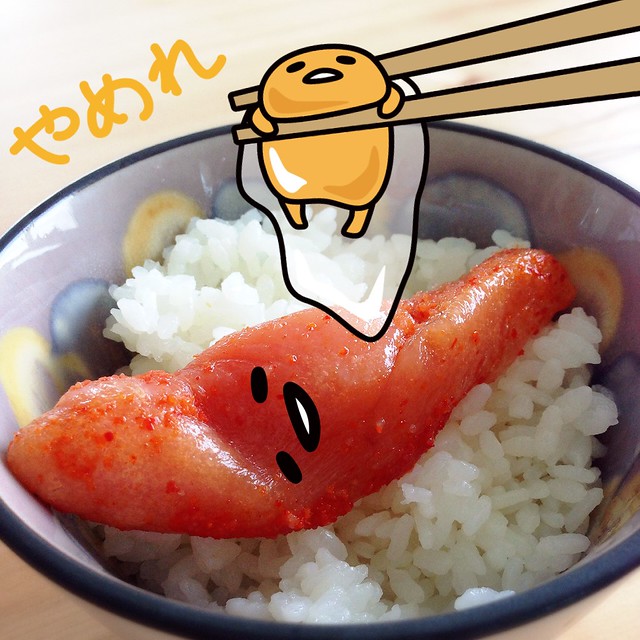 Same goes to sashimi, i believe. If the fish is so fresh it can be eaten raw, don’t cook it. XD

It owes to the caring culture of the Japanese to endeavor to find new homes for possessions they no longer need. That explains why vintage and used clothing fashion is such a big thing in Japan.

I only recently learnt to appreciate the whole Furugi(used clothing) culture. I used to think wearing used clothes is for the underprivileged and hated all the hand-me-downs. How arrogant. But now i really admire people who wear furugi. These Harajuku girls are rocking it like superstars.

Not only do you get to find some really great pieces in mint condition if you look carefully, it’s also a great saver for your wallet. It’s almost like treasure hunt.

Other than clothes, of course the Japanese are known to recycle almost everything recyclable.

If you dispose something that doesn’t deserve to be thrown away, maybe the garbage trunk will save it. 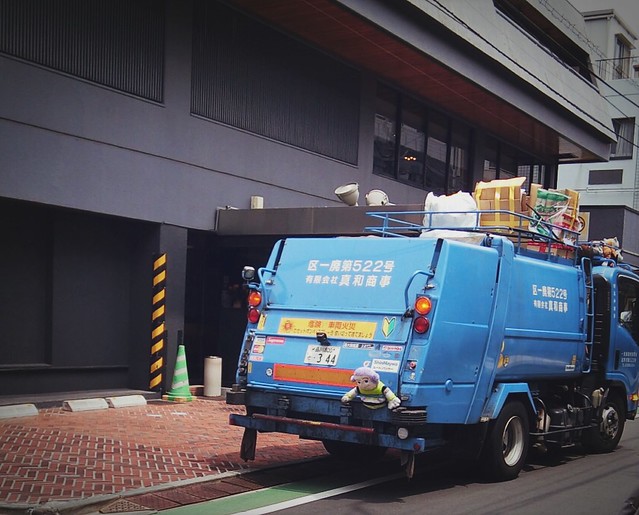 My favorite garbage truck. Ever.

The Mottainai spirit is translated in many daily habits of Japanese people. Saving water, saving electricity.

Some of the Japanese innovations are made based on Mottainai concept too. Look at this: 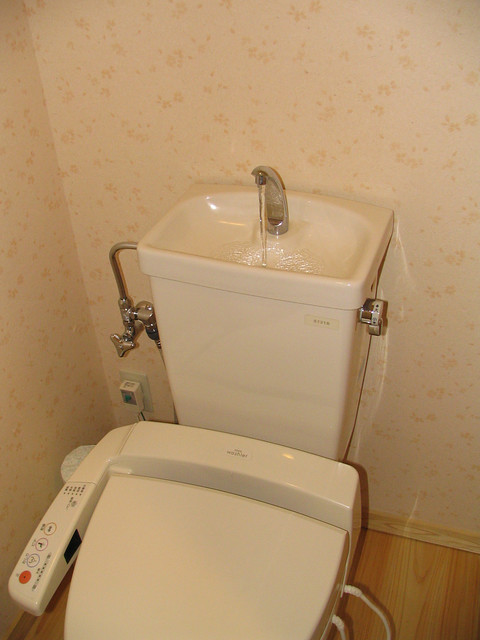 The water flows from the top of the sink, so you can wash your hands after toilet, and the water will be used to flush the next visit. Geniusssss.

I’m sure you are familiar with the recycling 3 R’s:  – Reduce, Reuse, Recycle. In Japan they take it one step further by adding the fourth R: Respect.

Just like Itadakimasu, the value stems from the Shinto belief that objects have souls and should be respected. And you respect something by utilize everything to its fullest potential, and by not wasting anything.

And that’s what i believe is the true essence of the word Mottainai. I also believe that this value sparks a lot of creative innovations in Japan, because it is an inspiration and a reminder to everyone that our earth’s resources are limited, so one should always be searching for new and creative ways to recycle and reuse to respect the mother nature.

So i talked about how rice is one of the most important and respected foods in Japan earlier. 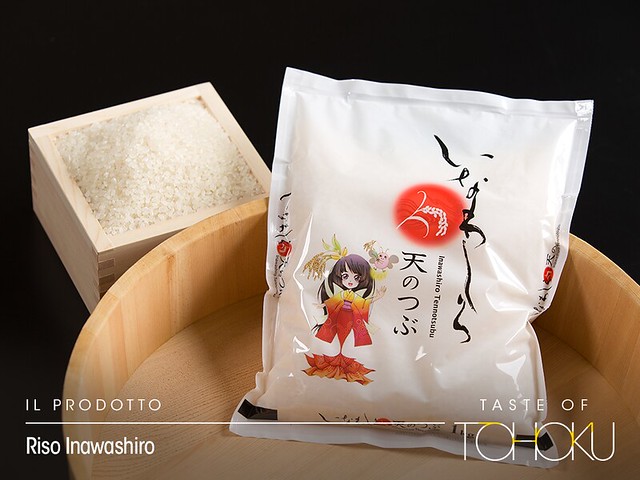 Inawashiro Tennotsubu, is a new type of rice developed through fifteen years of trials, with distinctive characteristics which makes it ideal for the famous sushi rice. 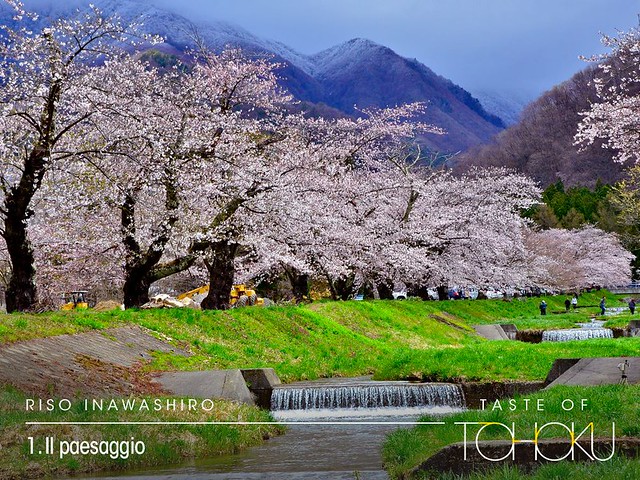 Inawashiro is a beautiful area in Fukushima prefecture, where the rice is growing at 500 meters above sea level.

Tennotsubu, the name of the rice, literally means “Grains from Heaven”.

If you know kanji, the word rice “米”, is made of the characters “八十八”, meaning eighty eight. The Japanese say that the farmers have to go through 88 processes to produce these precious grains, and they also believe that there are 88 gods living in one grain of rice.

Of course the gods in rice is more like a folktale. However, it isn’t so much as a superstition, but a way of life. It teaches gratitude and tells us to respect the things which allow us to live. That explains why rice is so respected in Japan and no one should waste even a single grain.

So now you know! Itadakimasu. And clean up your bowl!