During our 3 week’s stay in Osaka, the danna asked if I had any request to travel anywhere within the Kansai region, since we hardly come to this part of Japan. It had to be a day trip because we have booked our accommodation in Osaka throughout the stay.

I thought about it and I said, ALL!!!!! Mie, Shiga, Wakayama, in addition to the prefectures I have visited (Osaka, Kyoto, Nara, Hyogo) to complete the whole region. But that’s not really possible, given the tight schedule. In the end I have decided that if there’s one place I’d like to visit, it has to be Ise Jingu, which is said to be the most sacred shrine in the entire Japan.

There are many unofficial power spot rankings for shrines in Japan, and although each shrine is specifically powerful in certain aspect (for example wealth, relationships and baby-wishing), Ise Jingu champs every ranking as number 1. If you are curious, here are some of the regular top shrines in Japan:

I am not someone who is very spiritually connected, but each time I visit a shrine in Japan I feel safe, peaceful and content. And I feel like I keep wanting to go back, and that I am attracted to them in some ways. And this time I had a specific wish to make, and it was a very very big wish, and I thought I just had to do it in the most powerful spot in Japan, which is Ise Jingu (Ise Grand Shrine). 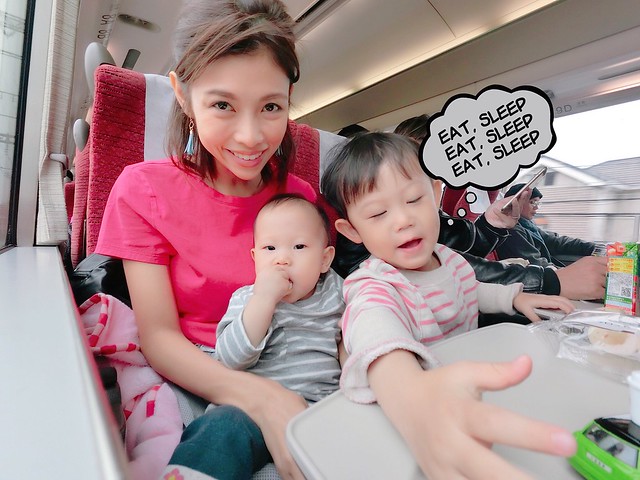 So we traveled by Shinkansen from Osaka to Ise Shima, Mie prefecture. The journey took about 1.5 hours.

Weather forecast said it was gonna rain the whole day but I didn’t care. It was a pilgrimage I had to make. 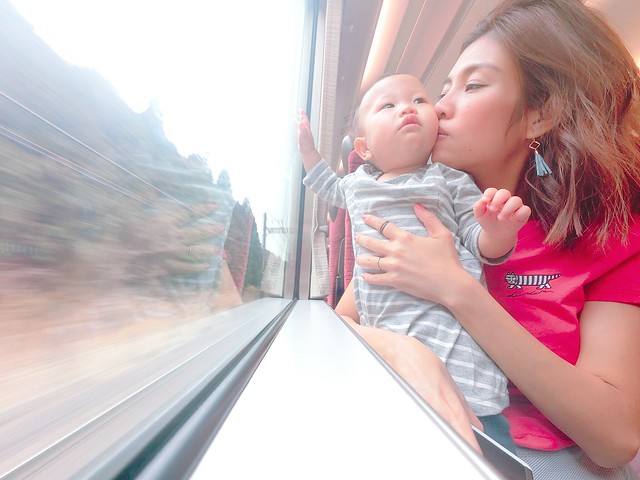 I know I have said this many times before but Shinkansen is really one of the best things ever invented. I have a feeling that I can complete my 47-prefecture life mission pretty soon!!

There are two main shrines in Ise Jingu, and they are Geku (Outer Shrine) and Naiku (Inner Shrine). It is advised that you visit Geku before heading over to Naiku. 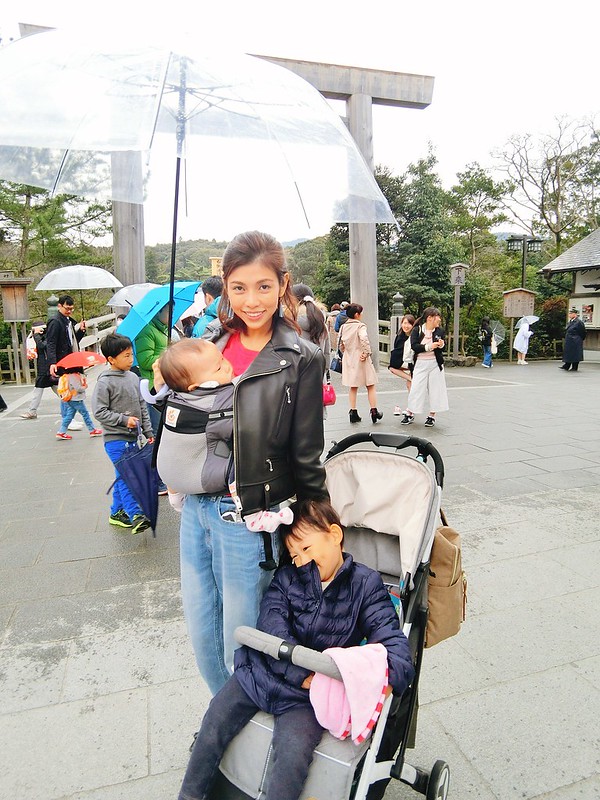 Since it is deemed the holiest shrine in Japan, many people expected it to be ultra grand and unique, and disappointed to find out that it looks just like any other shrine (in fact, much, much simpler than many other shrines). Like, “…that’s it?” hahaha. Just know that if you are here to pray, all you need is a true heart. 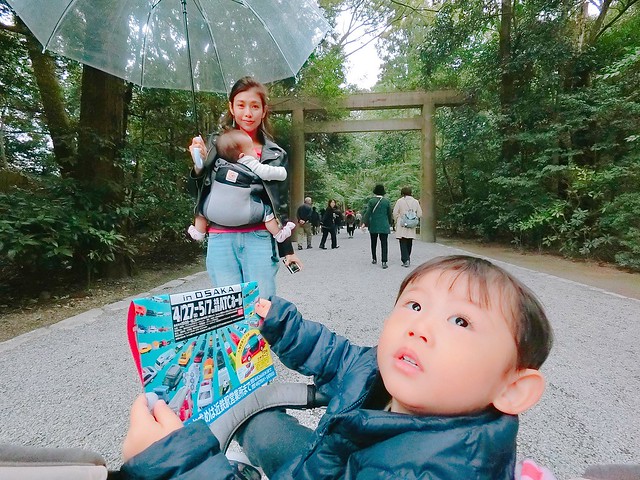 It’s a walk towards the inner shrine, similar to the path you experience in Meiji Shrine. 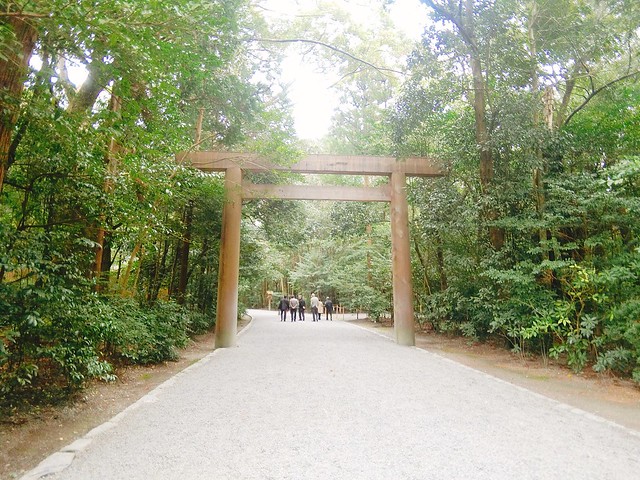 It was unexpectedly uncrowded, given how popular it is. 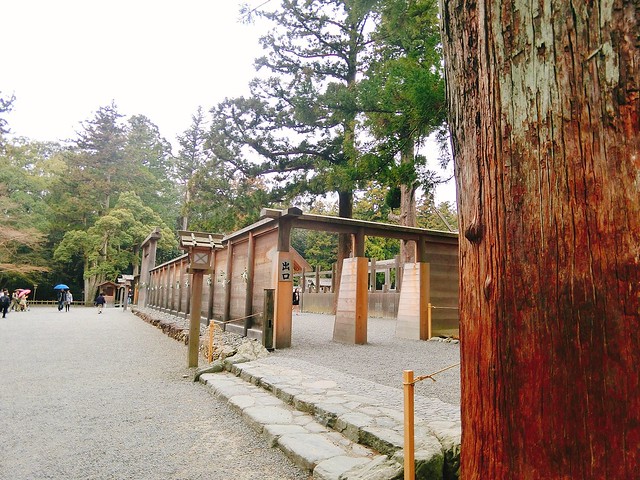 This is the only picture I could take before the no-photography point.

I made my prayers and then we we walked over to Oharaimachi, a stretch of traditional shophouses, for lunch. 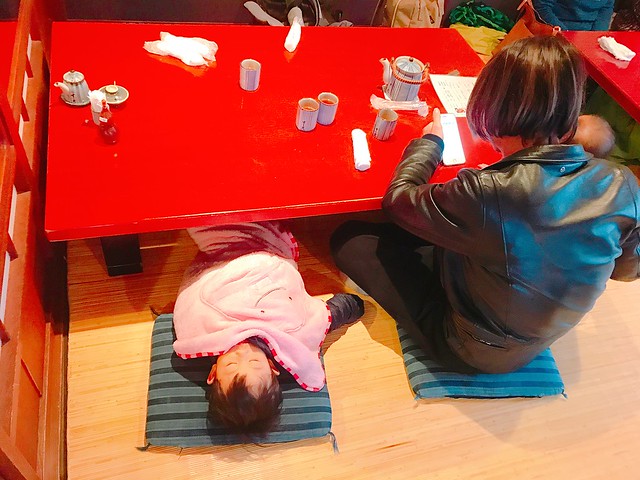 Most restaurants were full and it was still raining, so we went inside the only restaurant that could accommodate our family. Junya fell asleep and skipped his lunch. 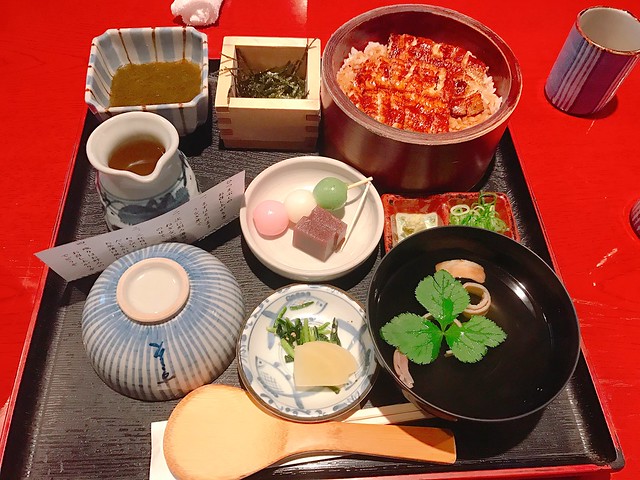 My Hitsumabushi. It’s like Unagi Don but it’s eaten differently with spice condiments and dashi soup. Something like ochazuke over unadon! I had been craving for this sooooo badly for a very long time, that I paid over $90 to have it in Chikuyotei, probably the only place thats serves good Hitsumabushi in Singapore. 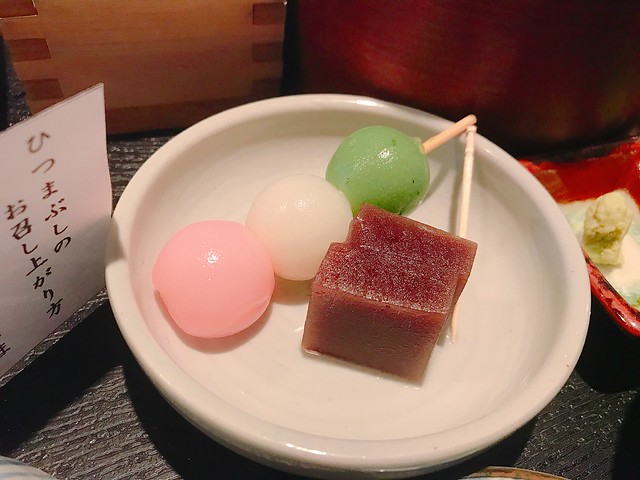 Dessert was yokan and hanami dango. 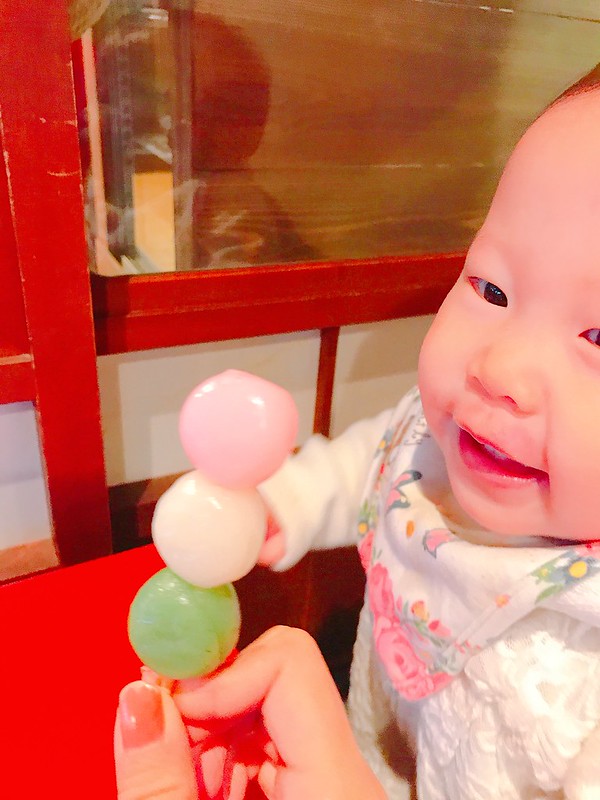 Ok you can have one tiny bite!!

Matsusaka is so famous for its namesake beef that many people didn’t know that it is a city, located in Mie prefecture.

My only mission in Mie was Ise Jingu. What else is Mie famous for? Ise Ebi (lobster), pearl (Mikimoto), and… ninja? But the danna had another mission. Which is to go on his yakiniku hunt.

Many of you probably heard of Matsusaka Beef. Well, it’s just the most expensive beef in Japan. 🤤 I remember having it in Malaysia before, and it was RM240 for 100gm…😮😮😮 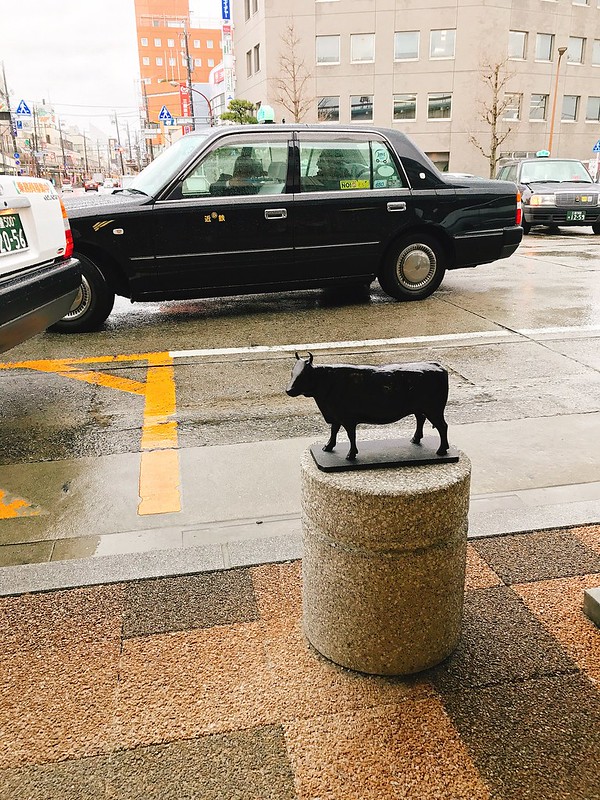 The restaurant the danna settled for was Isshobin, after reading many reviews. 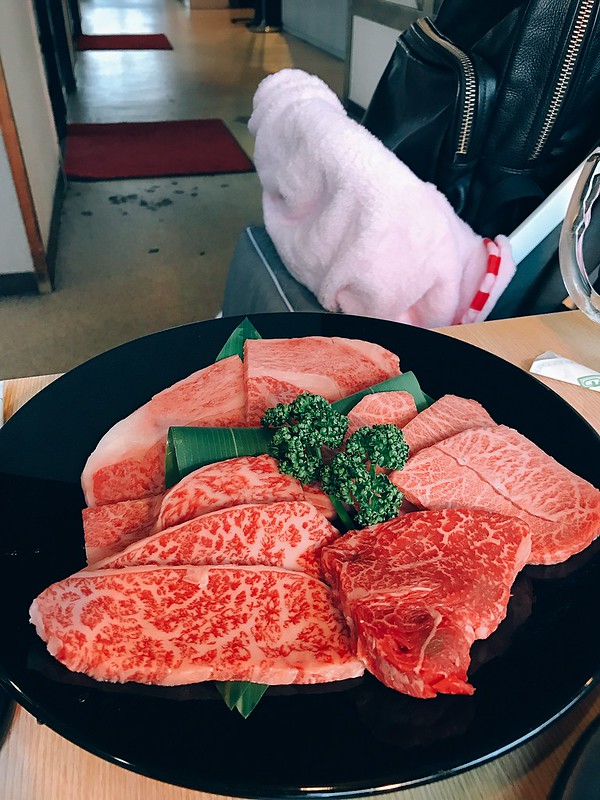 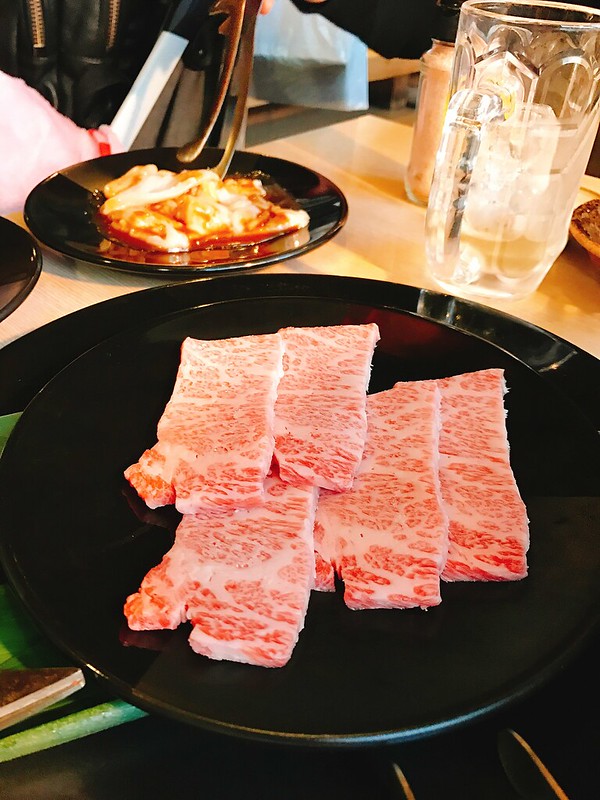 Check out those marbled morsels…. 🤤🤤🤤 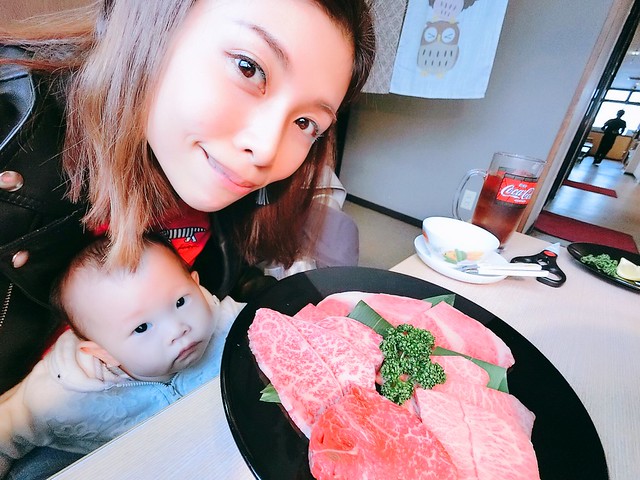 Yes Sakura ate too. Conquered best beef in the word at 10 months hahaha. 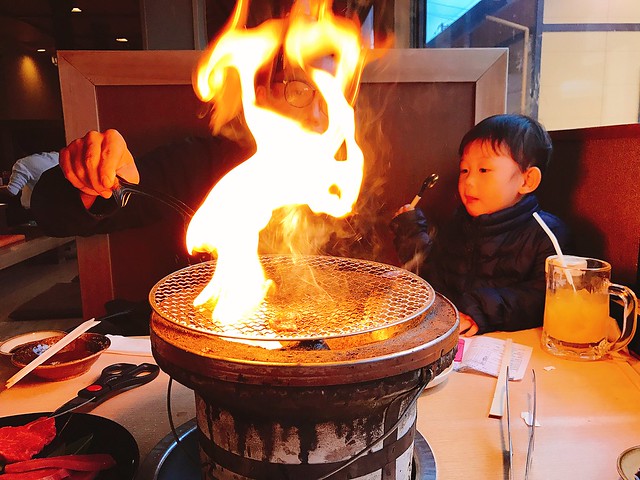 Junya skipped lunch so he was feasting real well. 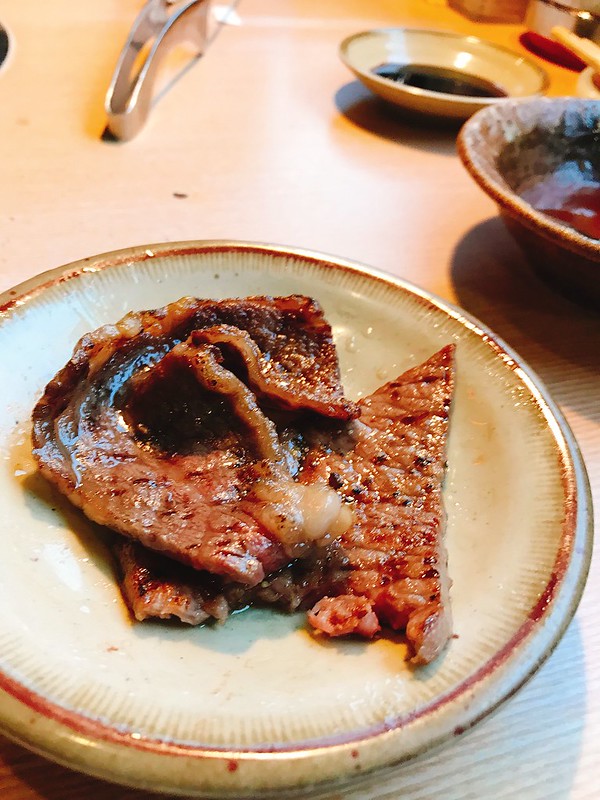 Both the danna and I agreed that it was one of the best beef we have ever had, but realistically, you can get the best beef anywhere in the world as long as $y$o$u $c$a$n $a$f$f$o$r$d$. We can have the same beef in Tokyo or even Singapore, just that it probably costs 2X or 3X more.

Two days after this trip, we headed to Kobe for a day trip and guess what we had? of course, the famed Kobe beef. That would be in the next post. 😀