My mission is to travel to all 47 prefectures in Japan. I have also memorized the prefectural map of Japan by heart. ^^

In this post, I have included the prefecture breakdown of my blog posts by regions for your easy reference. For alphabetical order, you may refer to the right hand drop-down side bar, “Various Cheese”. 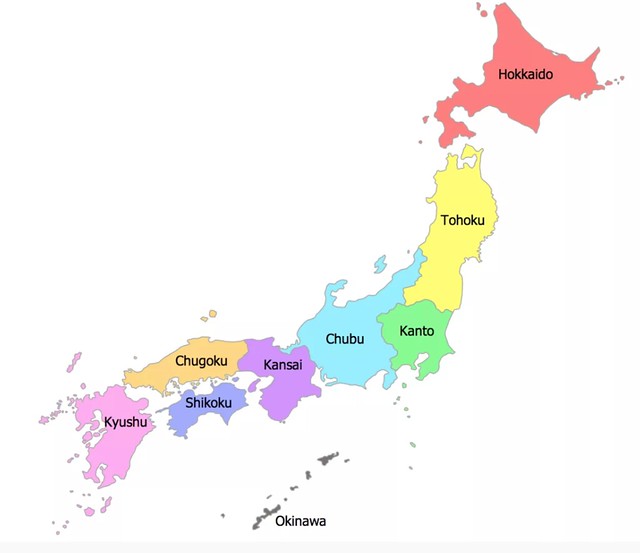 Before moving on to the 47 prefectures, first please memorize the different regions of Japan by heart. Japan is made of 4 main islands – Hokkaido, Honshu (the main island), Shikoku and Kyushu.

Also, many people have mistaken popular cities like Kobe and Nagoya as a prefecture itself, and often have trouble finding the suitable categories. Here are some common cities and towns that people often mix up as prefectures:

Also, Tokyo Disney Resorts are technically in Chiba prefecture, although I have categorized them under Tokyo.

Mt Fuji is sitting at the border of Yamanashi & Shizuoka Prefecture. Gotemba and Fuji Safari Park are in Shizuoka whereas Lake Kawaguchi and Fuji Q Highland belong to Yamanashi. So make sure you know which prefecture to check off, if you’re on the same mission as me! ^^

Hokkaido is a Dō (道) – territory. Technically, it is Hokkai Dō – Literally “Northern Sea Territory”
Tokyo is called a To (都) – metropolis
Osaka and Kyoto is called Fu – (府) province, as they were two of the oldest urban cities during Meiji period along with Edo (Tokyo). “Fu” was used to differentiate itself as an urban prefecture as opposed to “Ken”, a suburb prefecture. So in a way “Fu” is higher ranked in old times.

Another random fun fact – The governor of a prefecture is called a Chiji (知事). And my nick name is Japanese is Chījī. There was once I had a talk show about Kyoto with the presence of Kyoto’s Governor, there was a lot of confusion going on stage. It was awkward but very funny. Chiji  VS Chījī (知事 VS 芝士, even in Chinese it is the same 😂).

That’s all about prefectural trivia! Let’s get into serious business!

Here’s the breakdown of my blog posts by regions and prefecture. I have covered 38 prefectures in blog posts (as of 13 March 2020), hoping to bring you more! ^^

For prefectures that I have not covered on this blog, I actually also has 46 hashtags (except Fukui prefecture) on Instagram for you to explore, hopefully you can get some ideas and inspirations on places to visit and things to do, and here are the IG hashtags for your convenience.

Happy conquering your #47PrefectureMission! Let’s give Japan lots of love!

Too much luck so here's some balance

Ok i changed my mind.