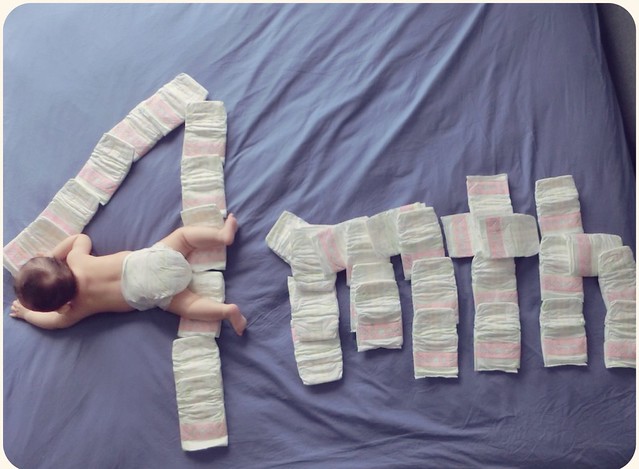 What has happened in the past month:

1. End up still have to sleep like a Chinese zombie after all. -_- 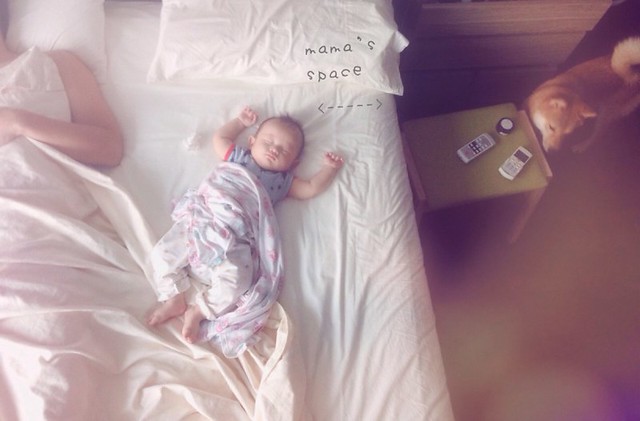 This picture explains it all.

I said i needed a God-size bed. But now that i think of it, even if i get an Infinity bed, i would still end up sleeping like that. Junya will simply roll closer and closer and closer to me. Based on this every day training, i think by next month i could sleep on a tightrope with ease.

Some people commented i shouldn’t co-sleep with my baby on the same bed cuz it will cause SIDS etc. Well, i am not going to delve into the whole co-sleeping debate, but let’s just say that i just simply cannot resist. Other than having the plus side of easy nursing at night, i also LOVE having him next to me. Sniffing him to sleep sort of became a bed-time ritual to me. A bed without him is simply too lonely. Which leads me to the next point. 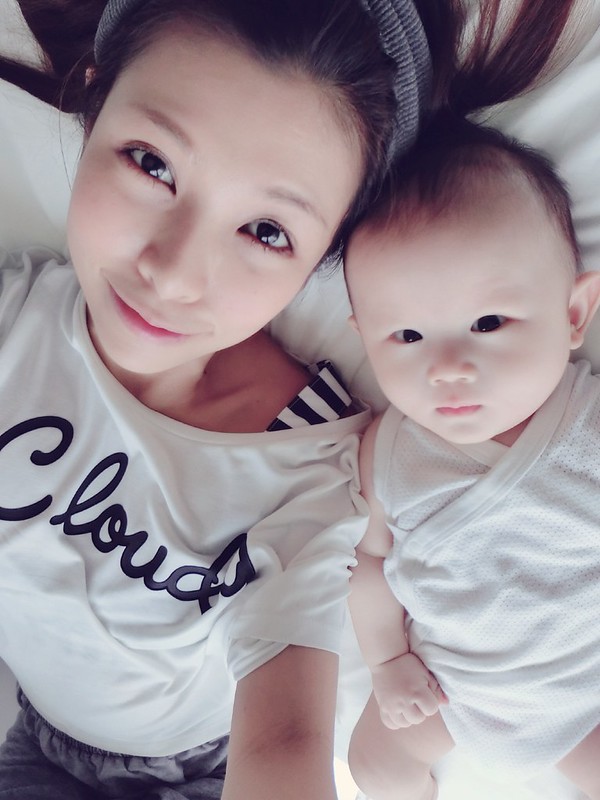 I never thought i would feel this way.

Before Xiaxue, Audrey, QiuQiu and i all got pregnant, we sometimes discussed among ourselves how we would dress our daughter up. It never even crossed my mind that i would have a boy. In my fantasy i would always have these two beautiful girls with long hair, sweet and docile. Both my mom and the danna also wished for a girl.

When i found out i was having a boy, i almost cried. It was too much of a disappointment. I couldn’t admit it publicly because people would judge and say what an awful mother i am and that i should just be thankful that my baby is healthy. Yes that much is true. But that was also how i honestly felt at that point.

Even right after he was born, i didn’t get this “love at first sight” feeling every other mother sings fondly about. He was this wrinkly, slow-motion being i could only curiously (and quite helplessly) stared at. I doubted myself why i couldn’t feel more lovingly towards him. Then i concluded that i am just a very stoical person wtf (although some of my friends have more polite choice of word: zen). I don’t panic/worry much. On the same level i also don’t love as much? 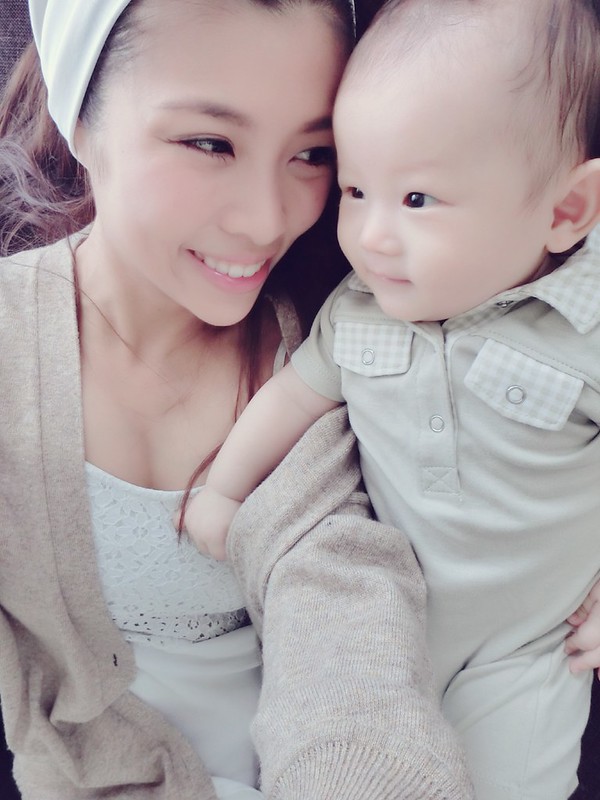 But 3 months have passed and i have completely changed my feelings.

I couldn’t recall when i started to feel this way, but i was so glad i have a boy. It feels so natural to me, i almost couldn’t imagine myself with a girl (although i would really loved to have a girl next).

I am infatuated with him.

Sort of in a way like how i had a crush on the first boy i liked. I want to get close to him, lie down next to him, hold his tiny hand in mine, and just stare endlessly at him. My heart warms up and melts away. And sometimes i kiss him on the lips (!!! Am i the only one who does this wtf), over and over again (and it gives me a euphoric high wtf. Is that normal?). 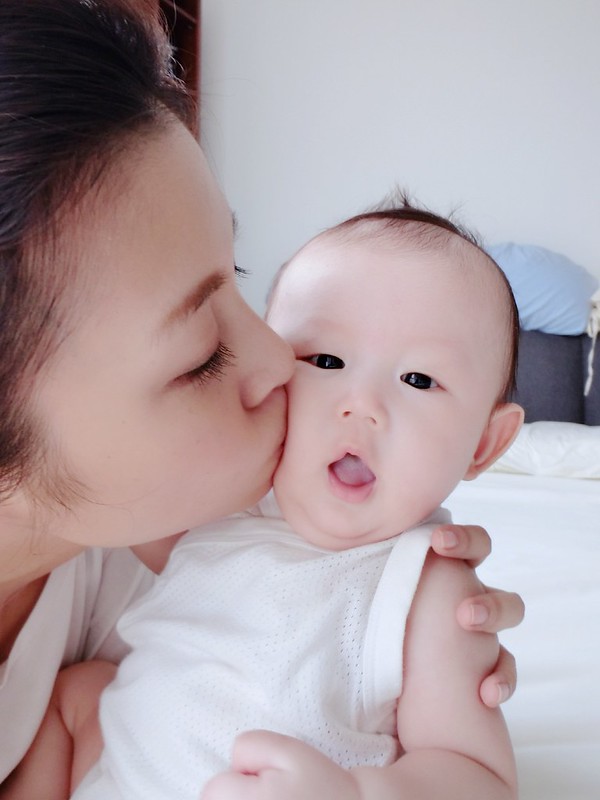 He is my little lover.

I don’t have a girl so i cannot imagine if it is the same, but i guess it would be a little different somehow. They say that boys are always closer to moms? I guess i kind of understand it. And strange enough i can now imagine myself with two boys (or even three???) and i’m happy with that (just saying that so don’t get my hopes high next round HAHAHA). 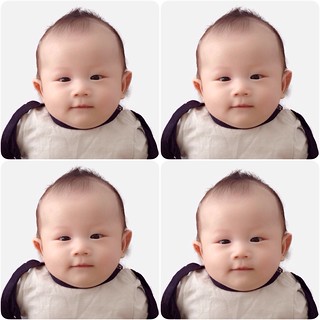 Actually this one is taken by iPhone lolol and i photoshopped the background away. Ended up the immigration didn’t let us use this -_-.

We would bring him back to Japan (first trip overseas woohoo!!) in December, he would turn 6 months then. There are so many things to worry about (starting solid? Cold winter… having him with me 24/7 and zero help, baby-friendly places, etc etc etc), but at the same time i am also very very excited about it!

2. Turning into a boy 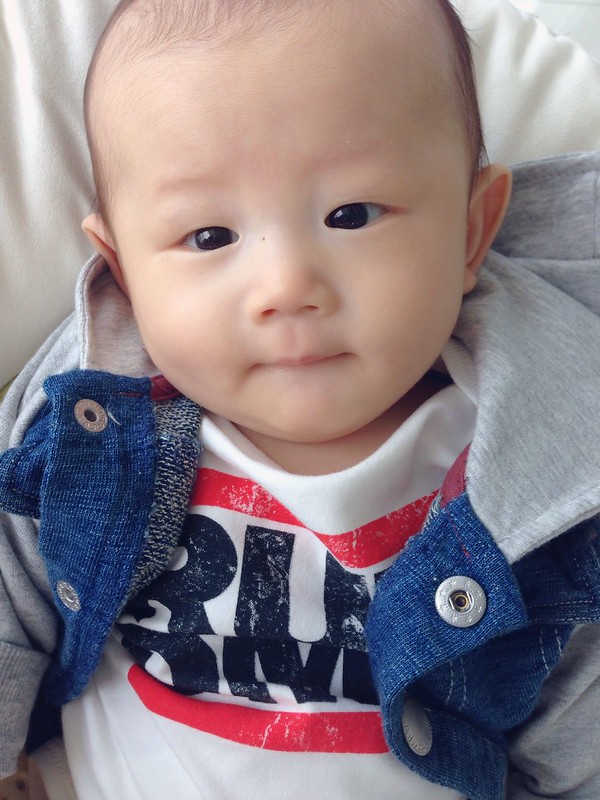 Somehow he loses his babyness each day, and turning more and more like a boy. He smiles more and cries less but also starting to show his temper eagerly lol. 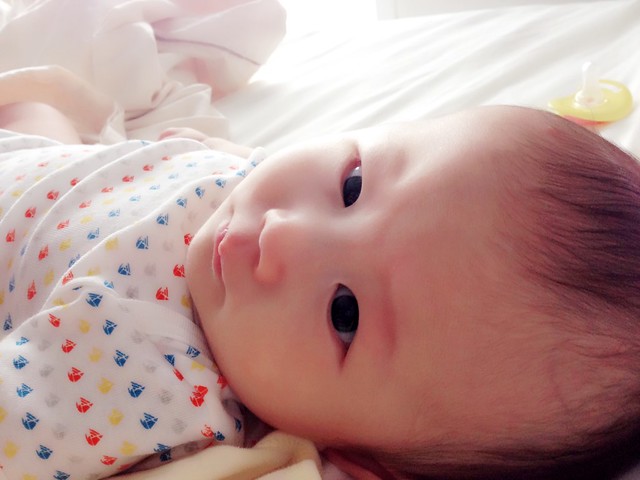 He would sigh dramatically sometimes and grumbles when he is not pleased lolol. 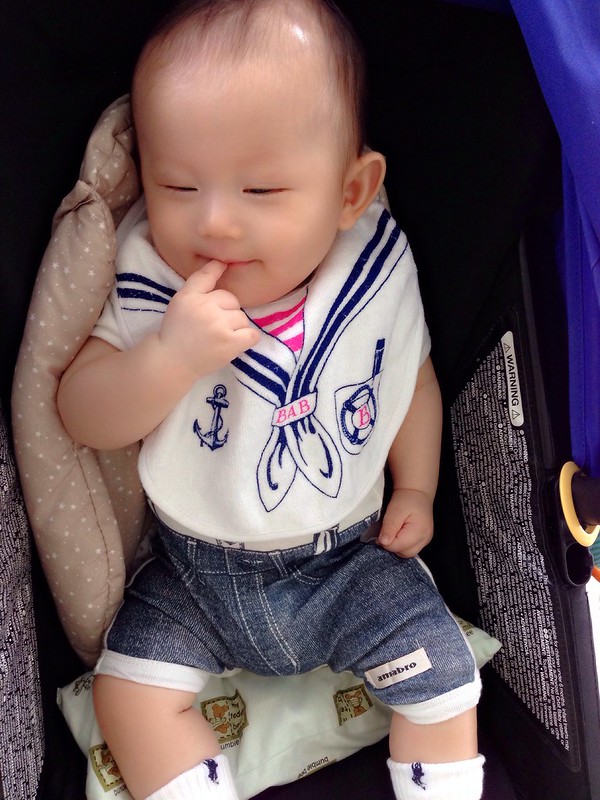 At 2 months old he discovered his drumsticks, but now he has mastered the skill of chewing on the bones lol. Instead of the whole fist now he has a favorite finger to chew on (not only just sucking anymore). 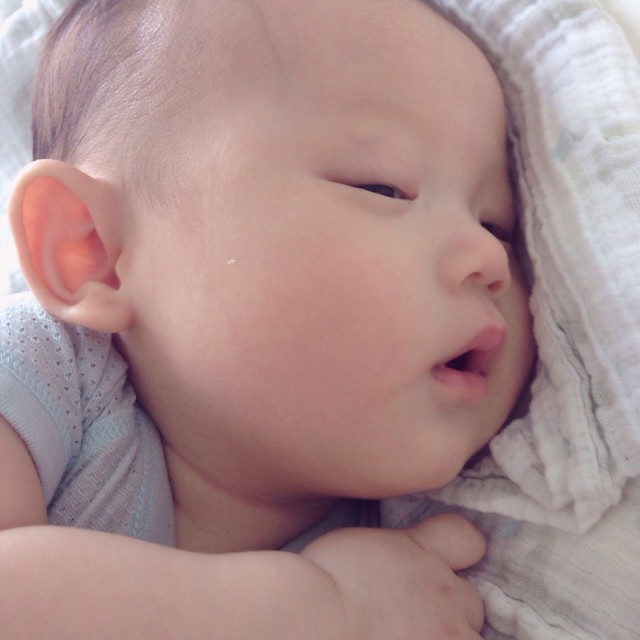 Same as the month before.

And i love to bury my lips deep deep deeeeeeeep into those cheeks. 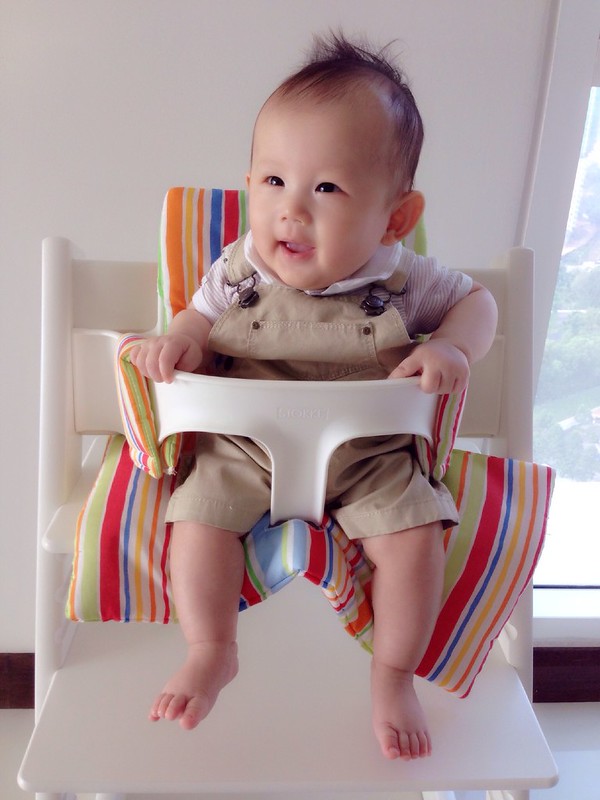 He can sit up now for a short while against the sofa without toppling over and he demands to be held up-right most of the time. (Cannot cradle him anymore. Anyway cradling looks awkward since he is so big now XD). 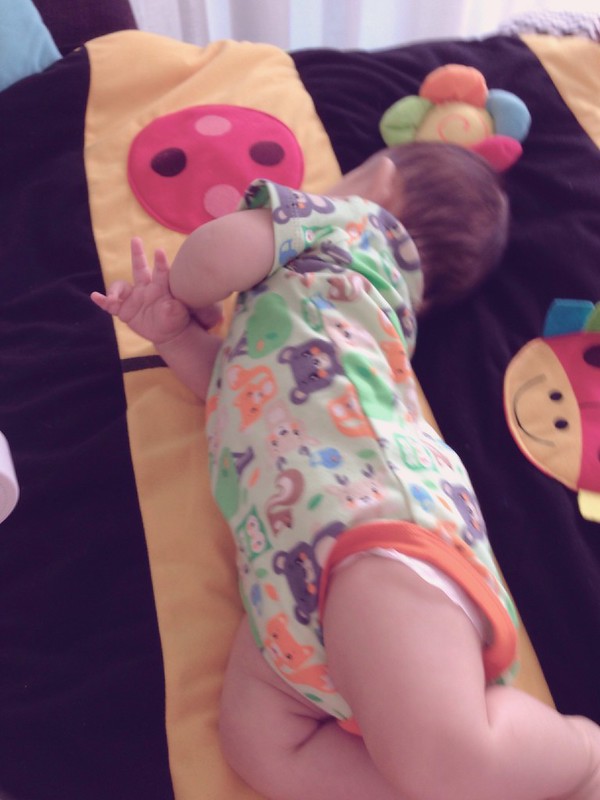 With a little help he can now flip from back to tummy. 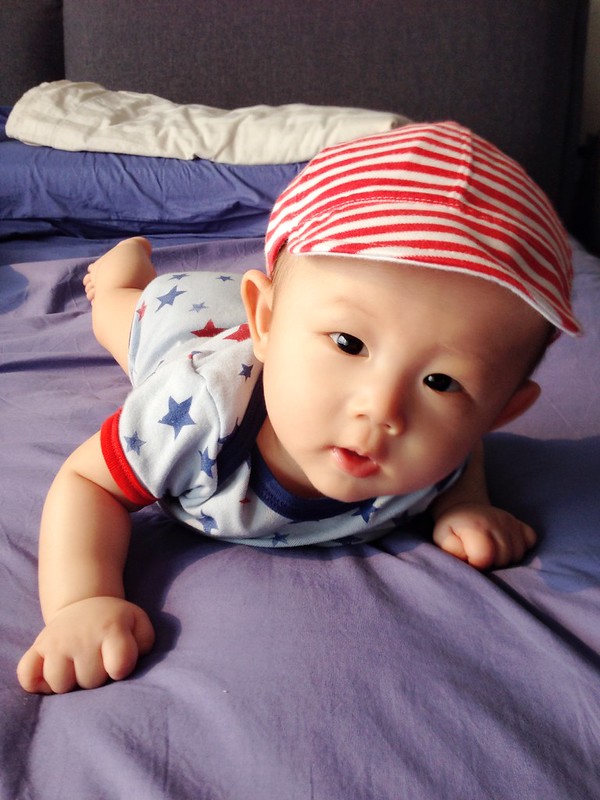 And also enjoys tummy-time a lot more now that he could hold his head up steadily. 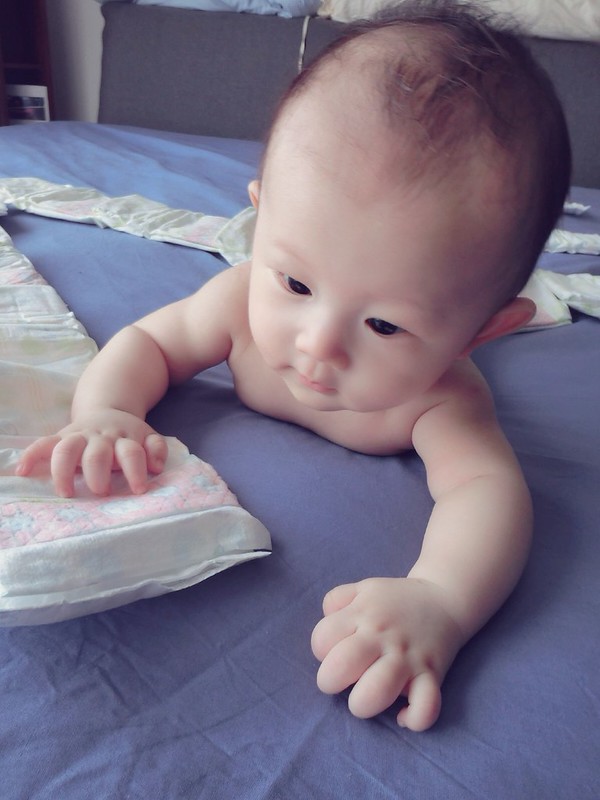