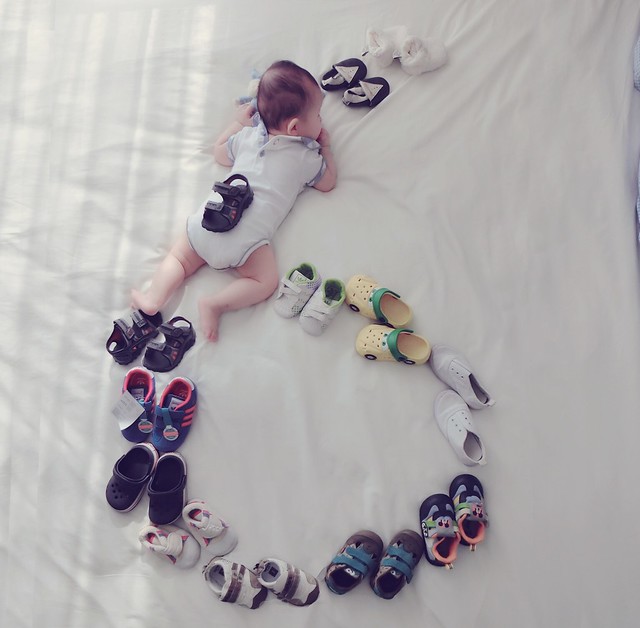 The so called half-birthday.

A lot of families in Japan celebrate their baby’s half birthday, i didn’t know there’s such a thing, until someone told me it’s very likely created by photo studios and other similar companies to make more money out of the gimmick-gullible Japanese parents. Good move. XD

To be honest i’m not so much of a die hard breastfeeding advocate. Just like pregnancy, i felt that the best for both mama and baby is to let things be. If breastfeeding doesn’t work for me then i feel that there’s no reason for me to forcefully do it. But luckily, i happened to quite enjoy it, and it happened to last till today without much struggle. So yea a glass of champagne for myself to celebrate this tiny achievement!! Oh wait.

Anyway initially i sort of told myself to set a target for 6 months if i can (if cannot then nvm also haha), then stop being a cow and break freeeeeeee!!! No more of this pumping nonsense!!!! But now that i got used to it, i was just thinking it would be quite a waste to not do it while i could. Junya has not fallen sick (touch wood) yet so i guess it’s part of the goodness of breastfeeding?  Plus….. i really appreciate the cup-size upgrade and insatiable appetite (without weight gain) and not really willing to give them up just yet…

I mean… just milk it while you can… right?

2. Being away for the first time

It was the first ever time i spent a good few days away from Junya. I was quite curious and wanted to see for myself how that would turn out for me since i have heard how inseparable one would be with her baby when she turns a mother. So i was invited to #itstheship 5D4N cruise, the danna and i both had never been on a cruise before, so we jumped at the chance (I mean… It’s free!!!) not knowing the full details of it. The danna thought there would be violins, ballroom dances and other relaxing entertainment. 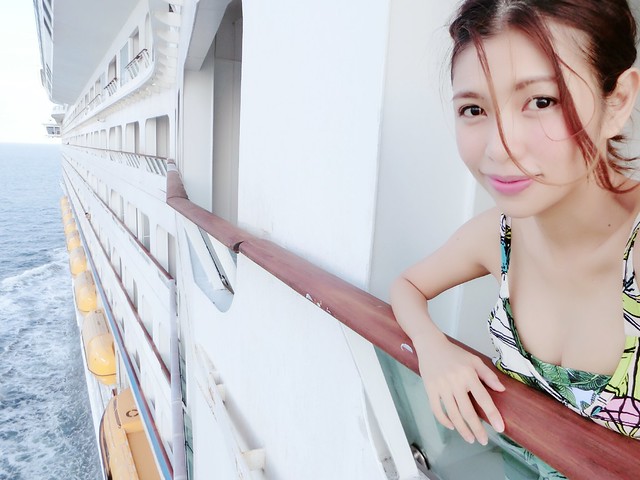 Turned out it was hardcore all-night dance parties for four whole nights that involve a sea of booze and lots of fancy swimwears. On a cruise.

All my friends were shocked as i was the last person they expected to be invited to such a blowout. I was the dumb, unhappening goat among all the wild horses lolol.

Not only that. I was probably also the only person on the entire ship,  amidst a crazy rave party filled with frenzied, bikini-clad and topless crowd dancing their intoxicated heads off, who, HAS TO GO BACK TO HER CABIN TO PUMP MILK. (It gives boob-squeezing a whole new definition judging the theme of the cruise.) 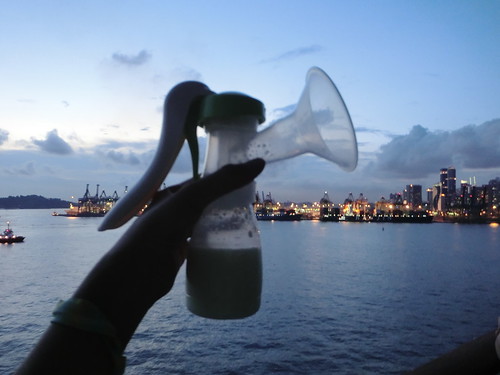 Talk about unglamness. You young girls, yes you. *points* The one laughing. Just wait. This is your future.

On the bright side, HEY LOOK I CAN HAVE A DRINK. 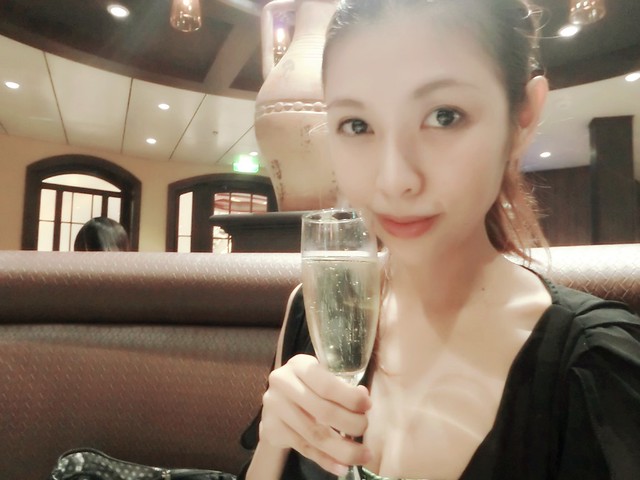 For the first time in over a year.

Strangely, i am not even a drinker before pregnancy. But like a rebellious child, the more you are forbidden to do something, the more you are obsessed with it. So yea since i am away from my baby and wasting my milk away anyway, I MAY AS WELL GET WASTED.

The danna said, “go ahead, today you can drink until you pass out”.

It was the best sparkling i’ve ever had.

Anyway, the cruise was really amazing otherwise. We joined the parties for a little while, there are some other chilling stuff to do. We had a great time, we also had FaceTime for the first time. 😀 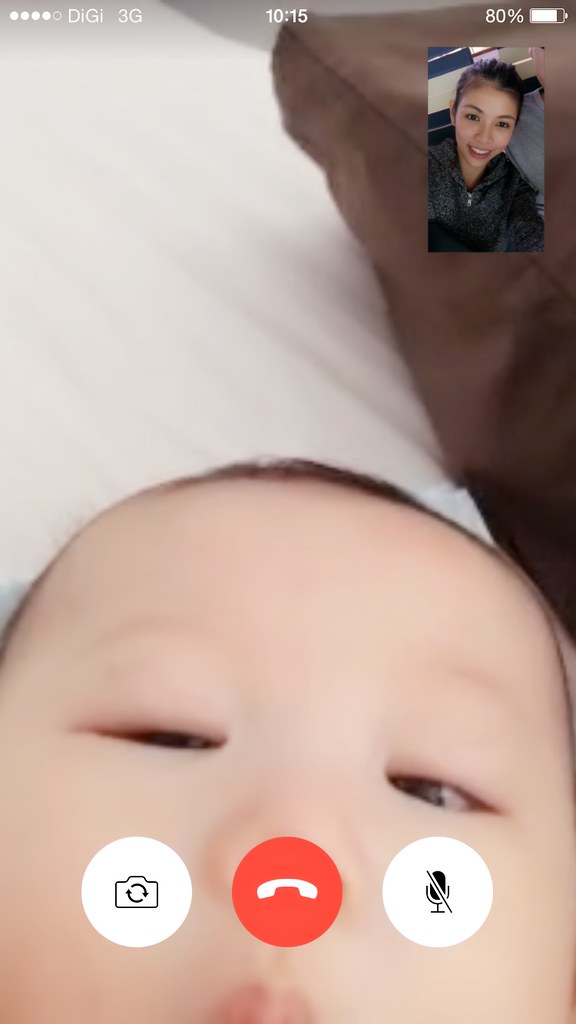 Internet was so impossible out in the sea, and when we approached the coasts of Langkawi and got the phone signals, we FaceTime Junya and book a flight straight back home from Langkawi. 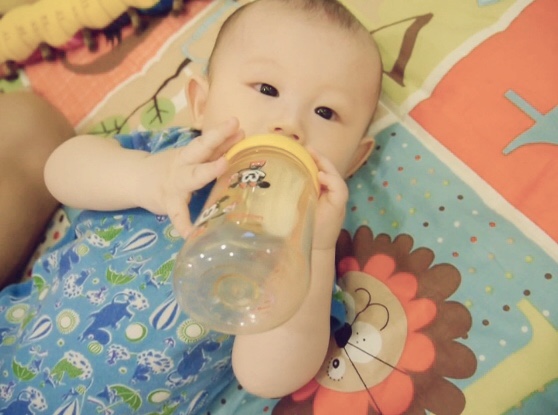 Before i was away for the trip, i let him try Meiji Hohoemi Raku Raku Cube formula, just to be sure he was ok with it in case the frozen breastmilk supply runs out. He gulped down the whole bottle.

I fished out all the gifts and toys given by friends because somebody finally learns how to “play”! 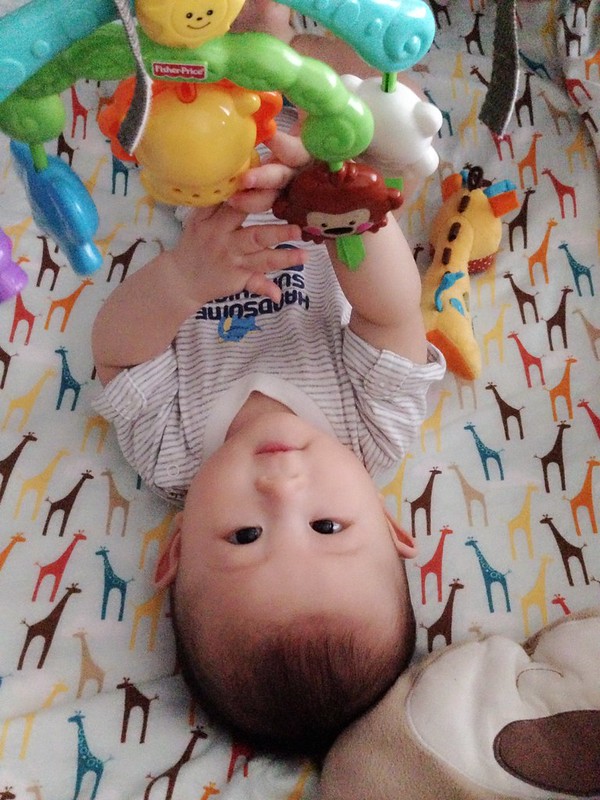 Other than his own drumsticks, you can now just hover a toy over him and that should keep him occupied for about the length of time to write 1/4 blog post. 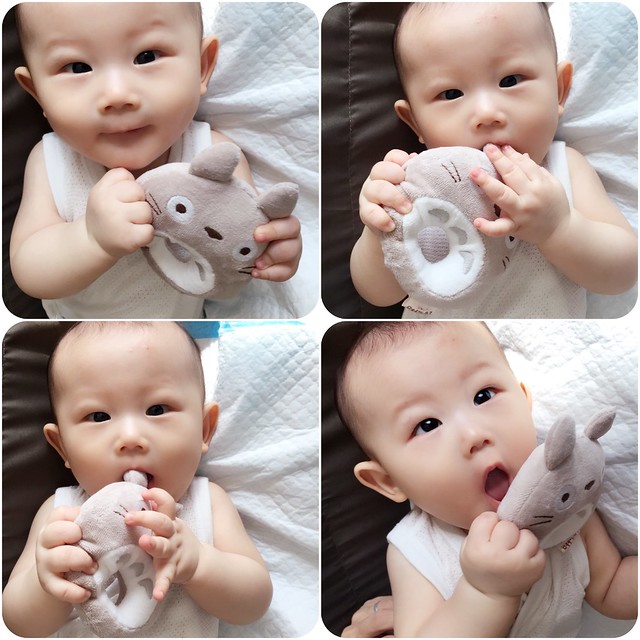 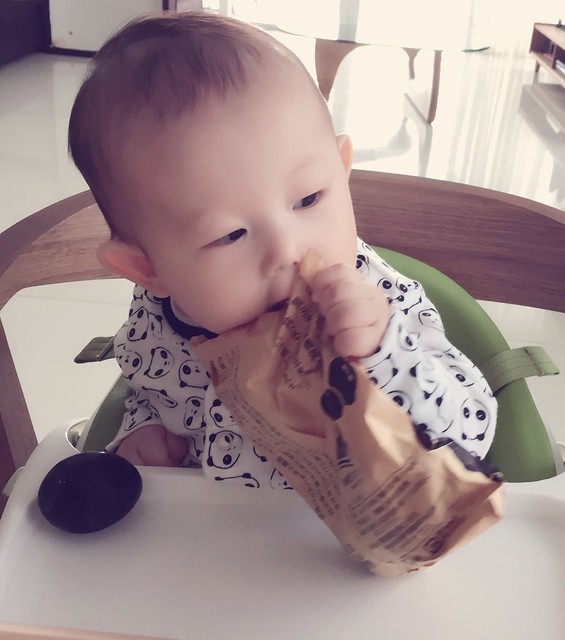 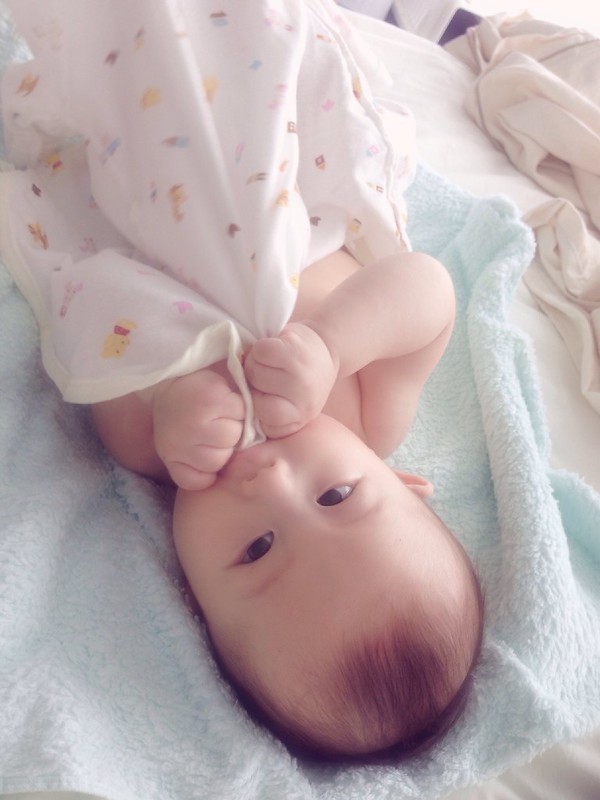 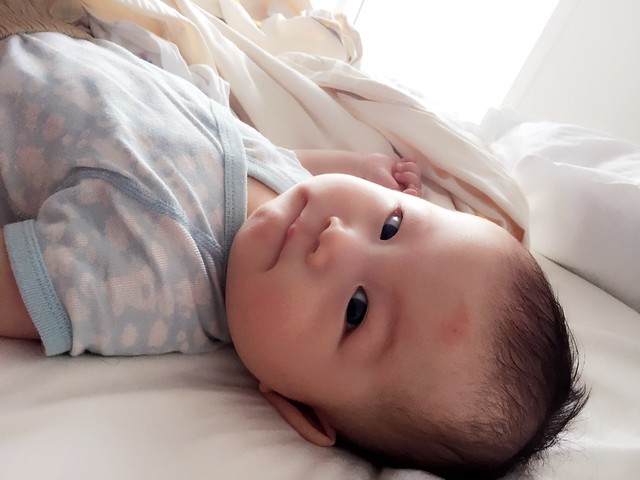 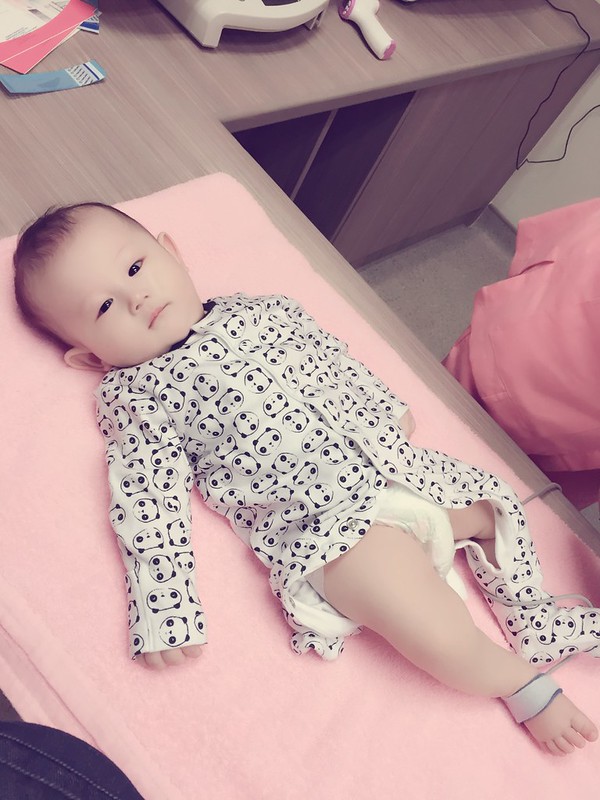 Keeping up to date with all his scheduled jabs. And every time just as heart wrenching. One moment he is innocently smiling at you as if saying mama, i like this! New place, interesting faces, oooh i get extra cuddles and toys. And the next moment the new person stick a needle into his thigh. But why, mama why???

How do you moms ever get used to this???? 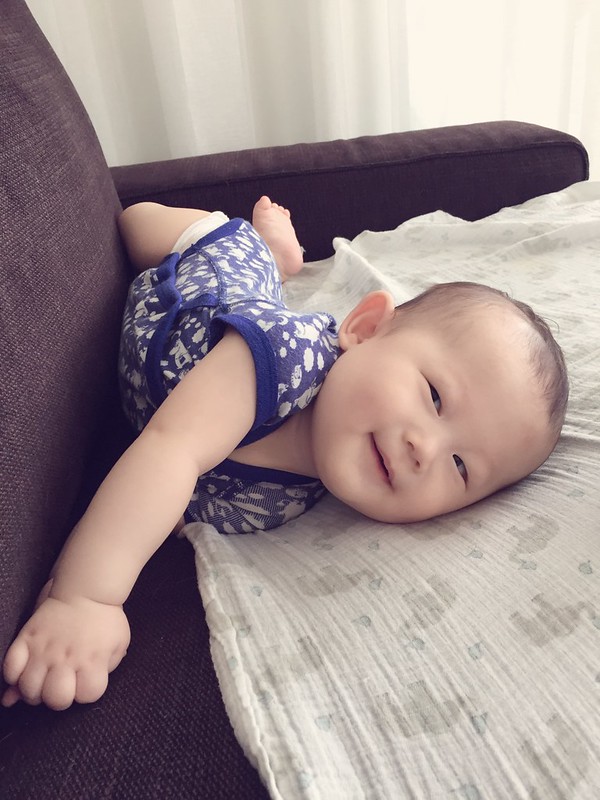 Now that he can flip over both sides, it means infinity. It was like he has just discovered a whole new world of acrobatic power with his body and he is maxing it all out rolling and twisting himself like a contortionist. 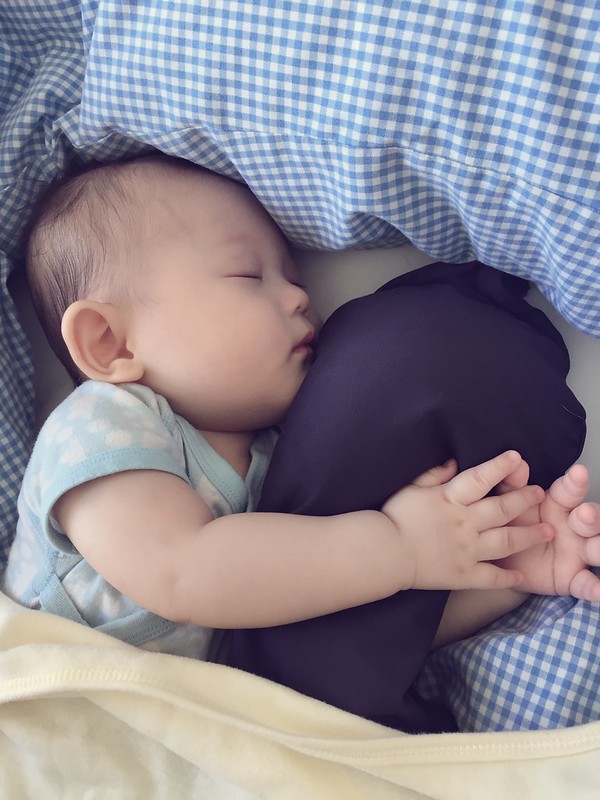 Which means the bed is no longer safe for him. If he happens to nap on the bed we had to barricade him with stacked pillows or build a nest with the moon pillow. (And yes even that is not safe now.)

That’s how he sleeps nowadays. Like a clock. Moving bit by bit by bit, tick tocking his way into my space.

I would put him down on the bed in the middle, parallel to me and his papa, like “III“. But 5 minutes later, on the bed we would form a “H“. And later on the alphabet may morph into a “T” because one of the strokes, aka his mom, has just fallen off the bed -_-. 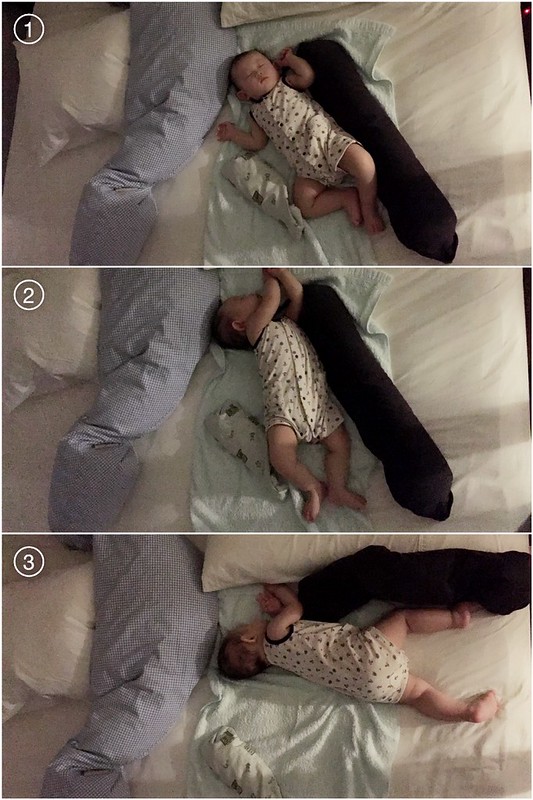 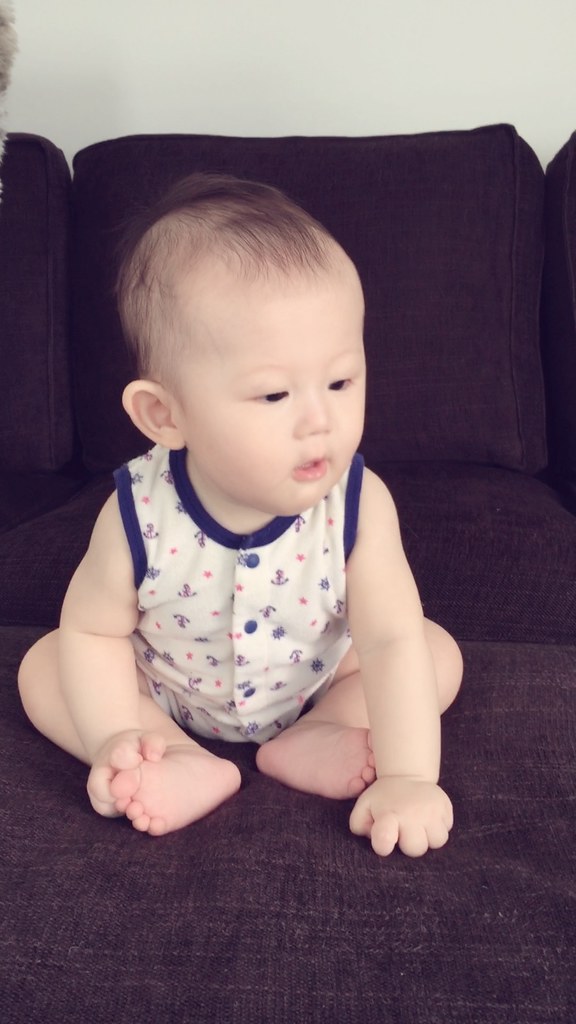 So the biggest milestone this month is that he is now able to sit up unsupported for a short while!

That’s all for this month! 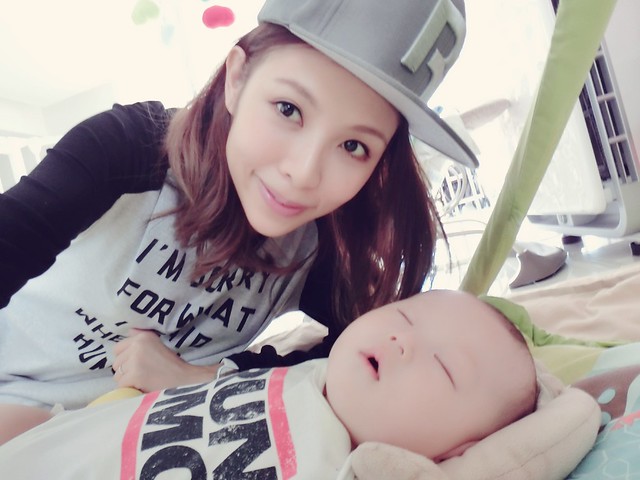 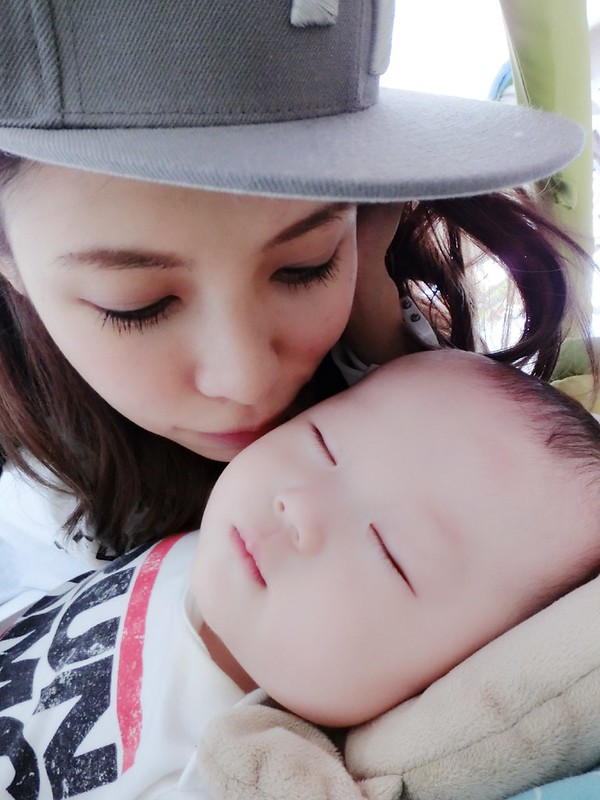 Next week we would be going back to Japan and this is the first time we are bringing Junya (although he has been before a couple of times, in my belly). It’s all gonna be really exciting 😀 😀 😀 😀