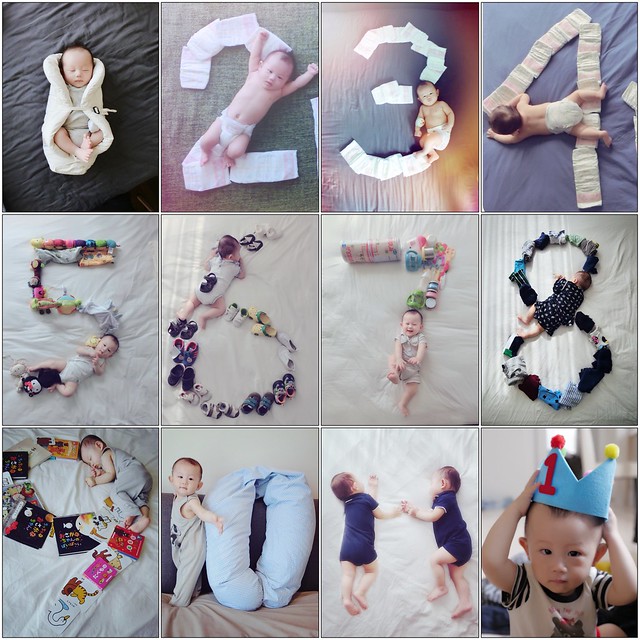 I waited one whole year for this collage!!! Hahhaha <3 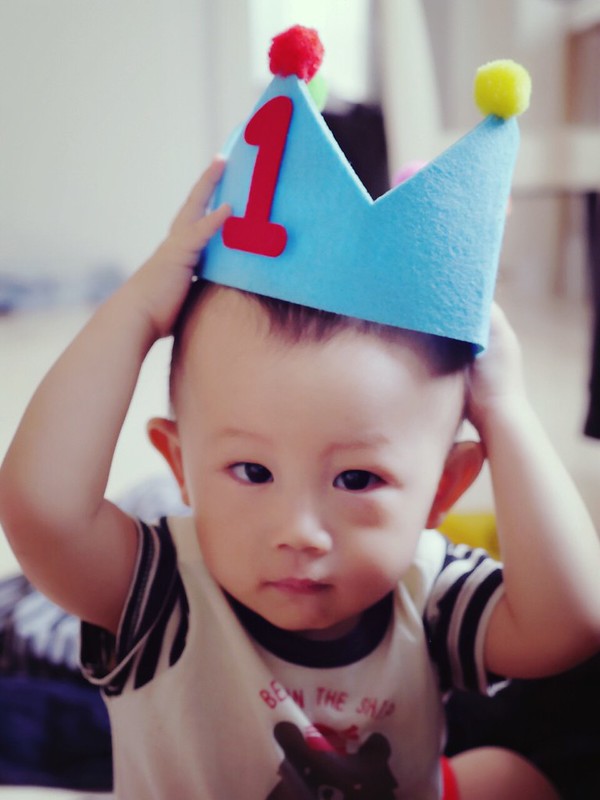 My baby turns one :3

Ooops. He is officially not a baby anymore. But he is unoffically forever my baby <3.

We spent half of the past month in Japan, and i could see that he is becoming a boy. He… knows things. He appreciates good antics, he plays with people, he tries to understand what we tell him. It’s been so much fun.

I told my son he must learn how to walk before we come to Japan, if not he doesn’t get to go to Disneyland for his birthday. He said ok (or at least i imagined he did). 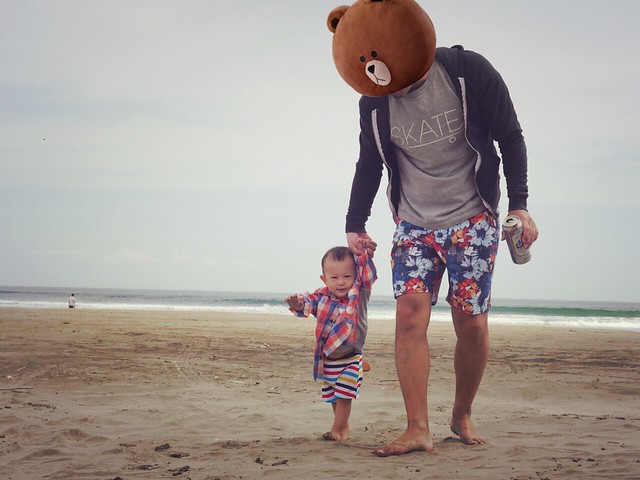 I guess Disneyland was not something to be missed!!!

Anyway he can walk a short distance now!! Like when he is standing holding the edge of the coffee table, i say “come to mama!” (in the most literal sense HAHAHA omg can’t believe i really said that!!) he would happily walk and just collapse into me laughing. But for long walks of course we will need to hold his hand. 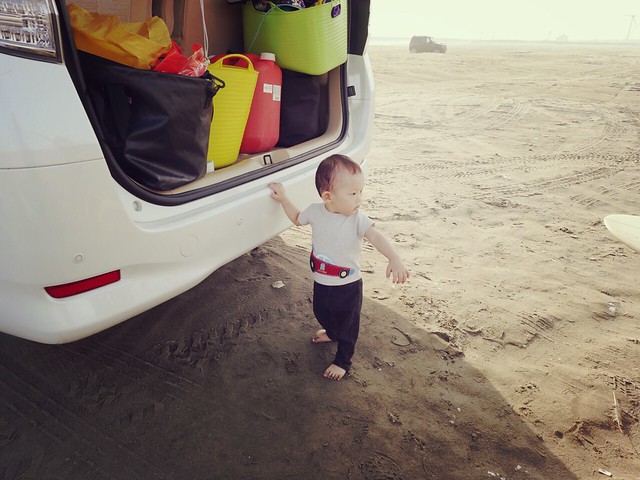 I was looking at this picture, and i just felt that he has grown so much!! (Even though he’s very small in size compared to other babies his age.)

His favorite past time now is to take selfies. I don’t want to admit that he learnt it from me. Here are some of his first selfies, out of the 937982854752 i deleted. 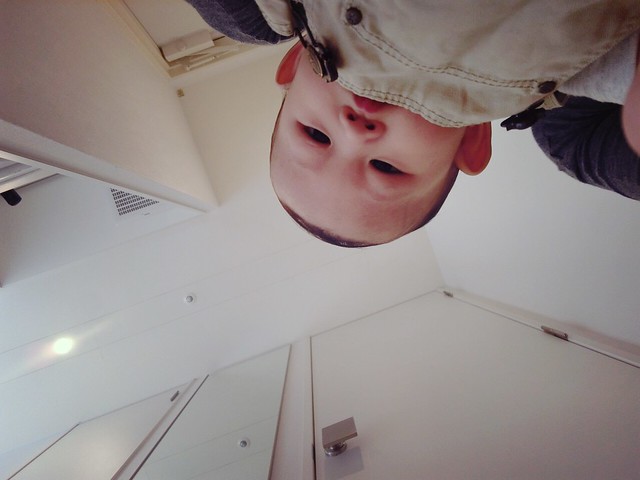 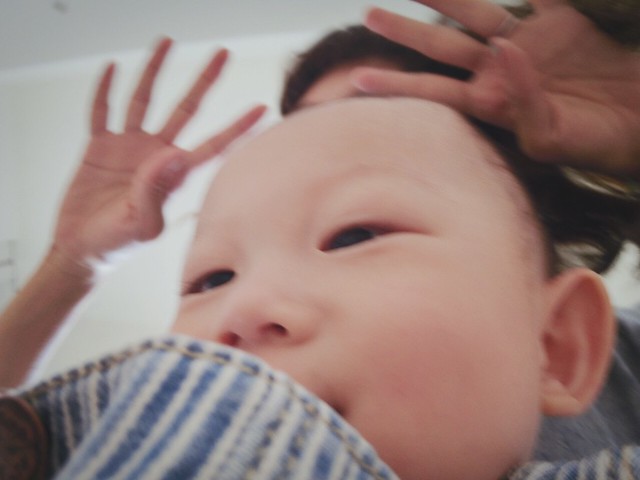 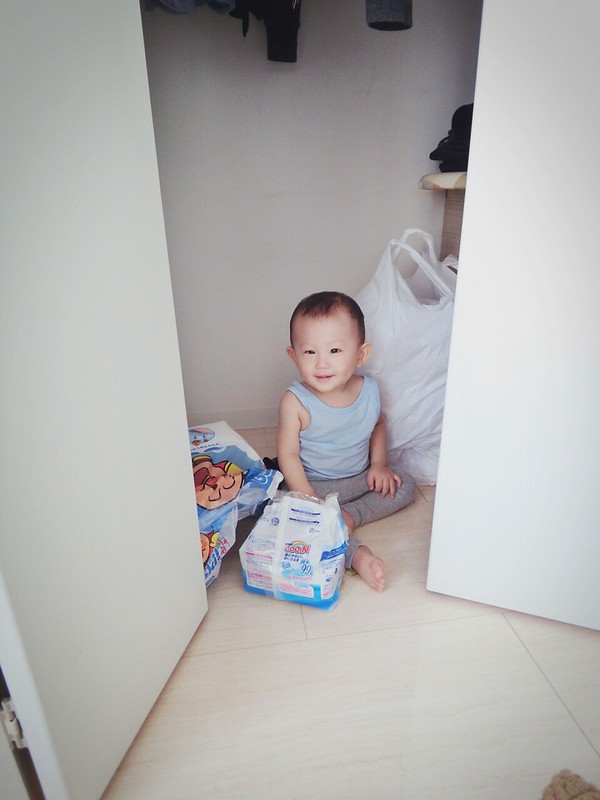 His second favorite game is to get me to catch him. He doesn’t know how to “hide” yet so he would crawl into the closet (totally exposed) or under the table and grin at me. And when i pretend i found him and say “i’ll catch you!!!” he squeals in delight trying to escape lolol.

Instead of us covering ourselves or his eyes, he now will sendiri ajak play peekaboo (or inai inai… BAA!!! in Japanese), covering his face with blanket and pulls it off to tease us XD 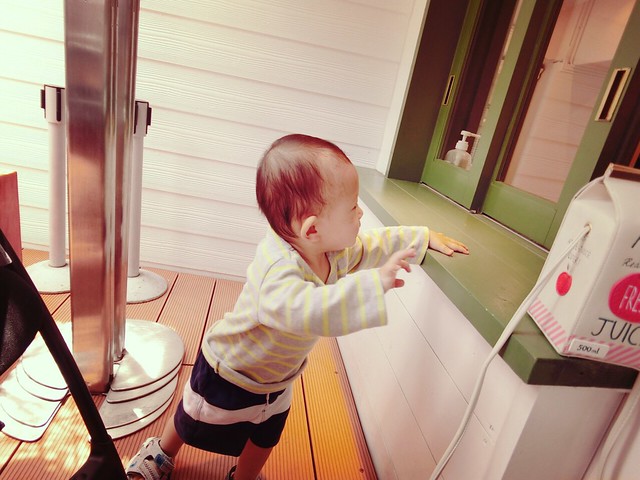 He will no longer sit still (or even wiggly) on the chair. He demands to go down and examine the creaks on the floor and communicate with ants -_____-.

Sometimes being on the ground doesn’t even satisfy him anymore. 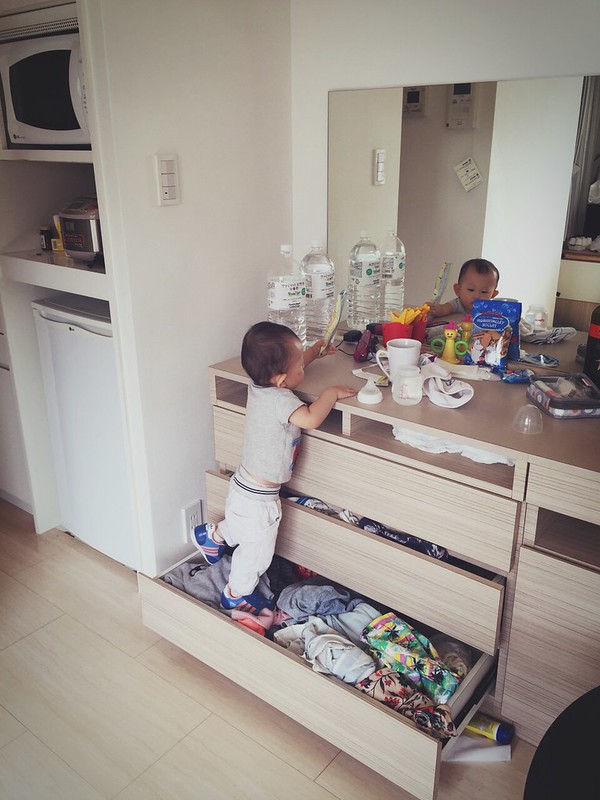 He will climb that extra mile to get what he wants. 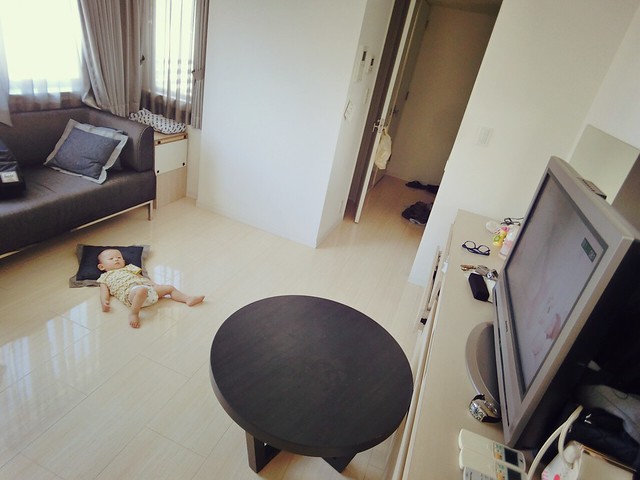 He has never ever watched the TV back in Malaysia (not like we don’t let him la, it’s just there really is absolutely nothing to watch back home). Japanese TV programs spoilt the world. 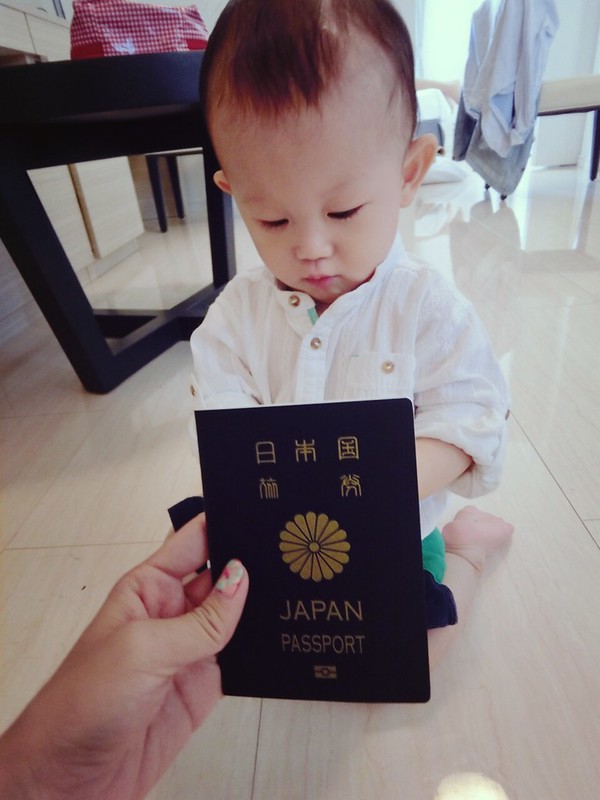 I suddenly realized that my son could not join us in Hawaii because he was holding a Malaysian passport and he didn’t have a US visa. Right. We’ll either burn the tickets or just leave him home alone with his TV remote in Japan. We frantically applied for him a Japan passport since Japanese don’t need a visa to go to the USA. Neither do Singaporeans. Never mind. One day. Soon. I’ll join the family with my own dream booklet. 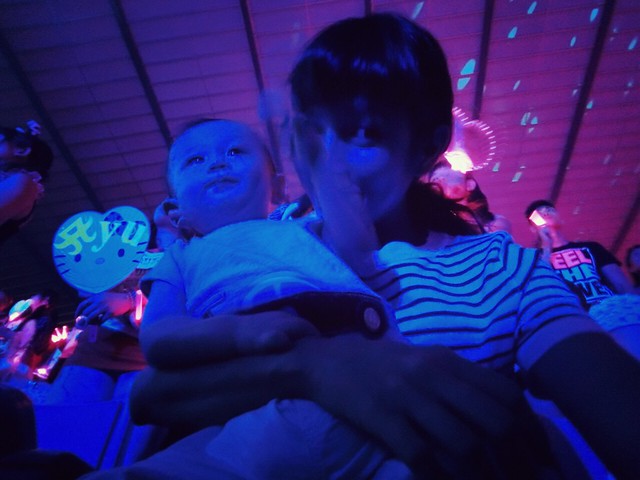 I know it’s crazy!!!!!! Yes, but i have loved Hamasaki Ayumi for like… 15 years!!!! That’s much longer than i have loved you, son. Hahhaha. So yea you are coming with me to witness the epicness. 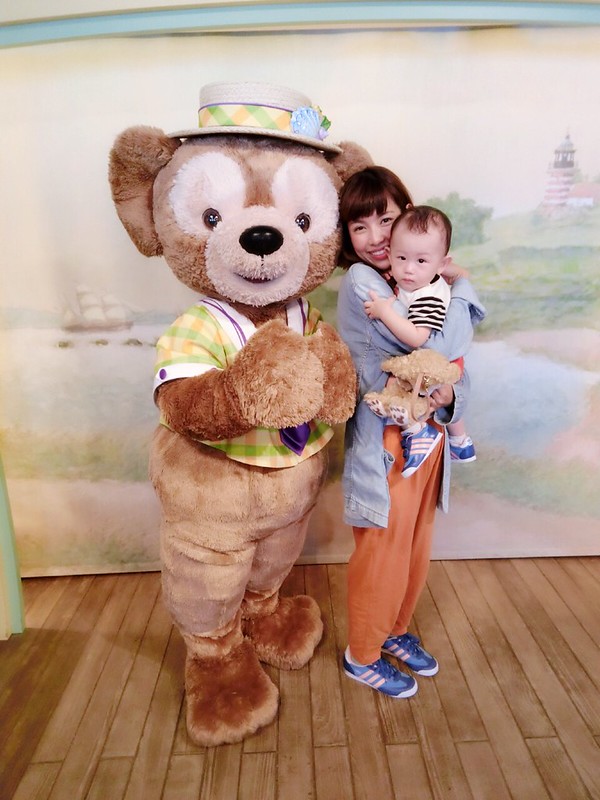 Birthday present as promised. Didn’t even cost anything cuz kids under 4 no need to pay wan 😀 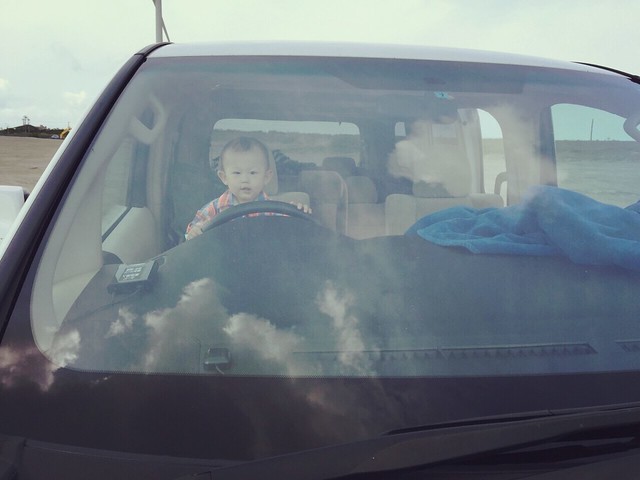 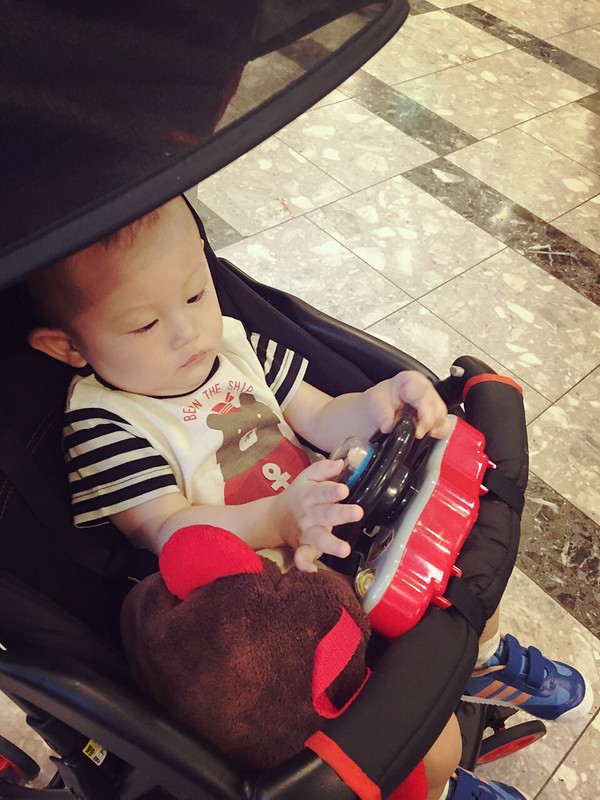 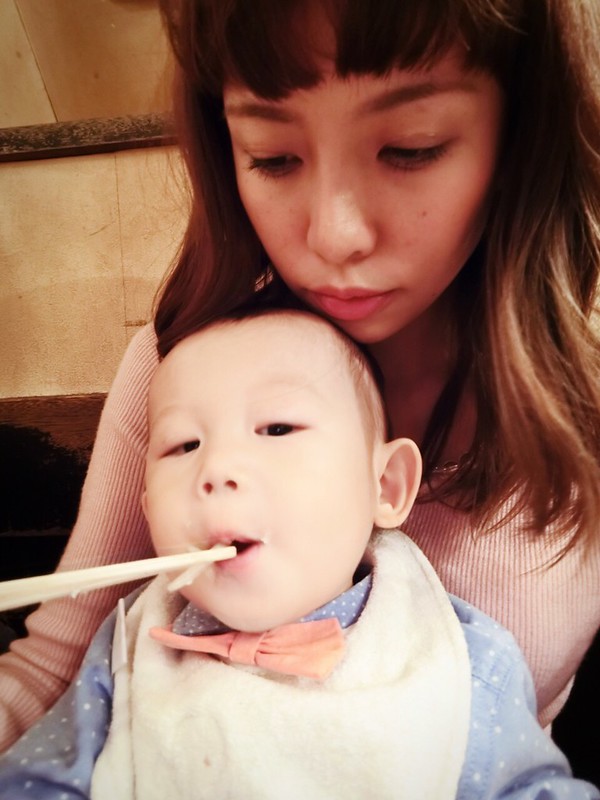 Since he was almost ONE, and that we are in Japan, i was quite lenient with food and let him take a bite of many adult lunches and dinners… Udon, tofu pudding, mentaiko rice from bento, onigiri…… as long as they are not too salty or oily. Which leads me to the next point.

He eats SO MUCH. Back home he shows zero interest in food, i almost had to question my own cooking whether they really taste like chalkboard or not. 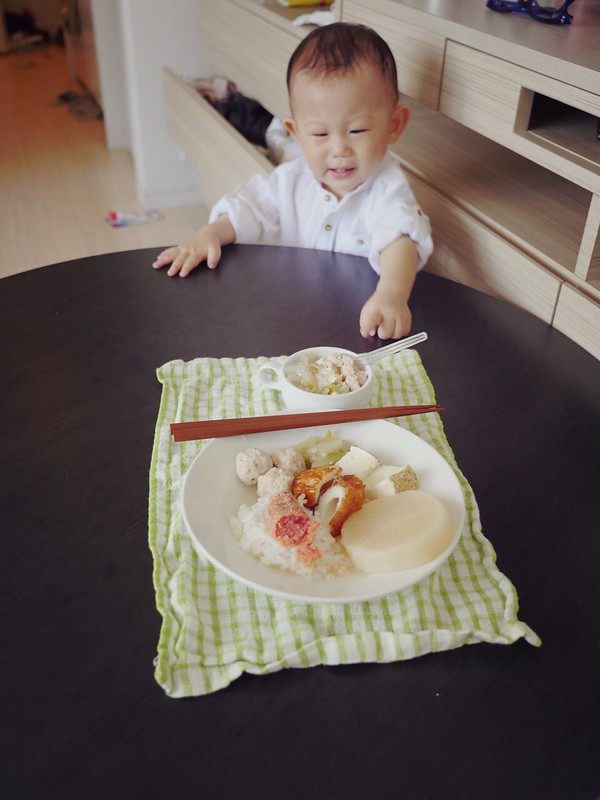 BUT HERE HE COMPLAINS IF I FEED HIM JUST ONE SECOND LATE.

He would point at his rice bowl and mumbles non stop. -_- 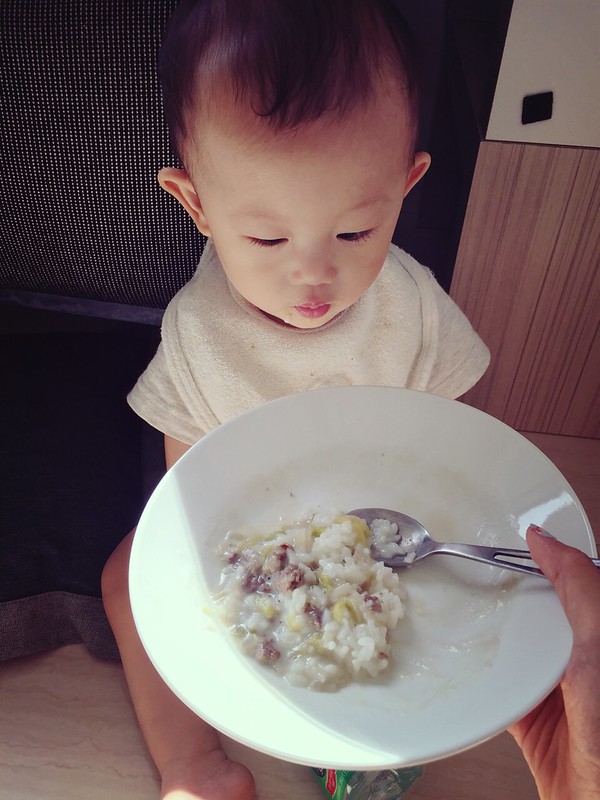 And he finishes whatever i let him have. ALL.

WHY DE???? Back home i use the same ingredients cook the same style, why he no eat????? It’s the Japanese air or water i swear. Oh yes. And the wagyu. And the milky milk. And the Japanese fresh everything. Now i scared. His tongue has upgraded. I am scared. How will i ever be able to keep up when we get back? T____T. 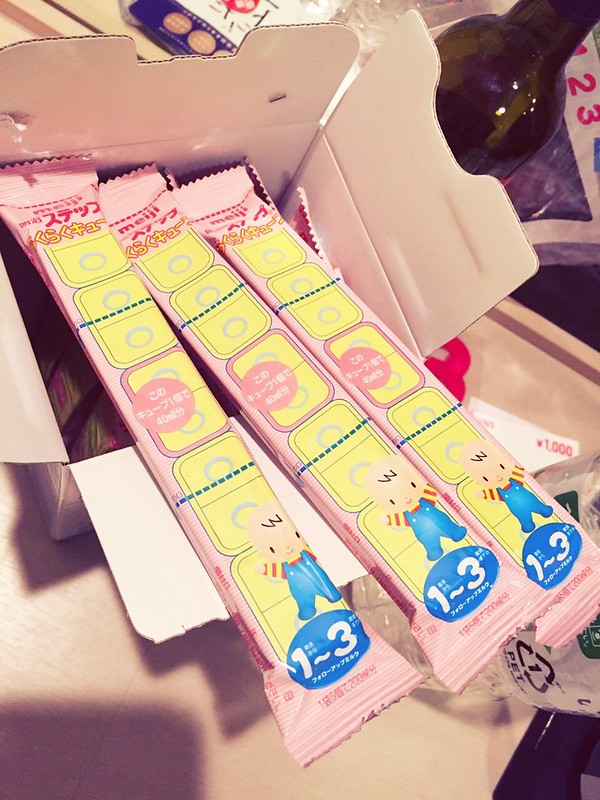 And then on his birthday we introduced the toddler formula called Step Up (Suteppu Appu) for 1-3 year old! I don’t know why but i felt like it was such an achievement unlocked, really like Tamagochi levelled up liddis lolol. 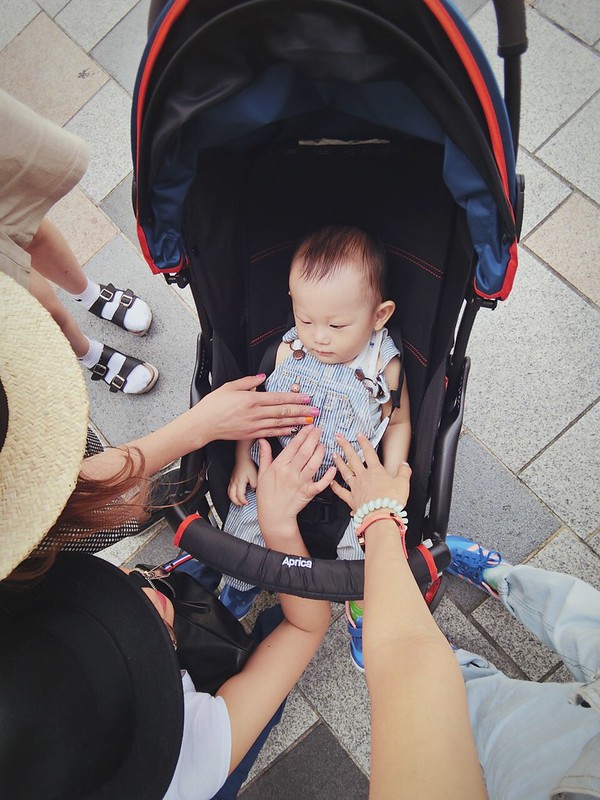 He’s getting good at it. “Com’on bae. Touch me like you do.” 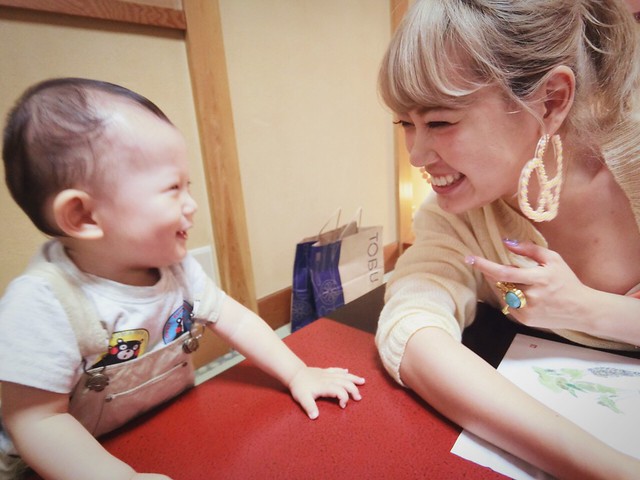 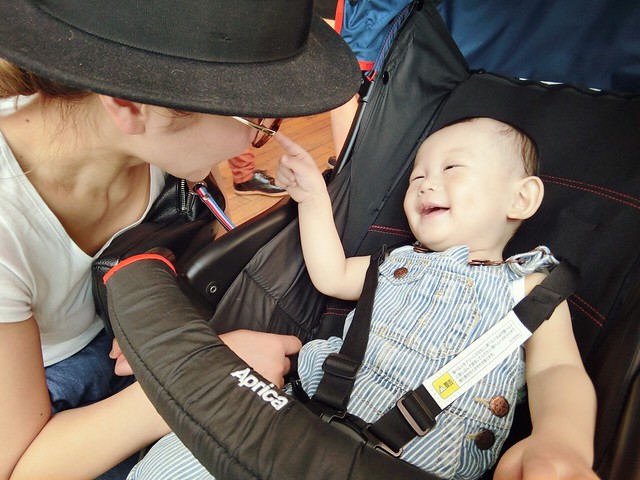 “Your glasses make you look so cute!” 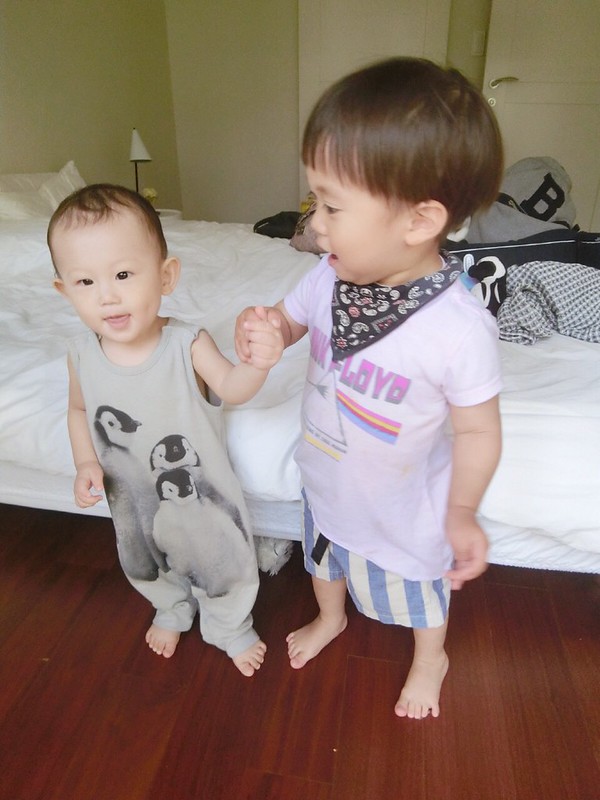 Boys are okay too ^^ 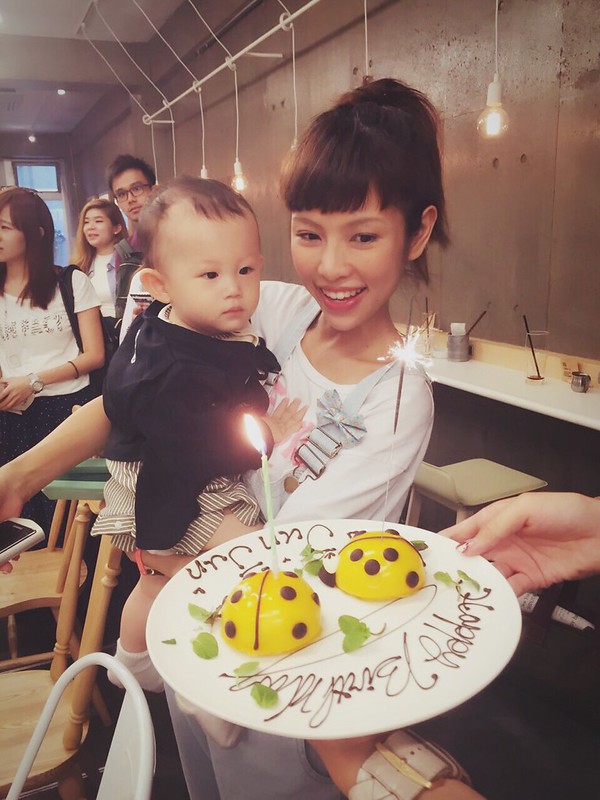 First birthday celebration in his life! 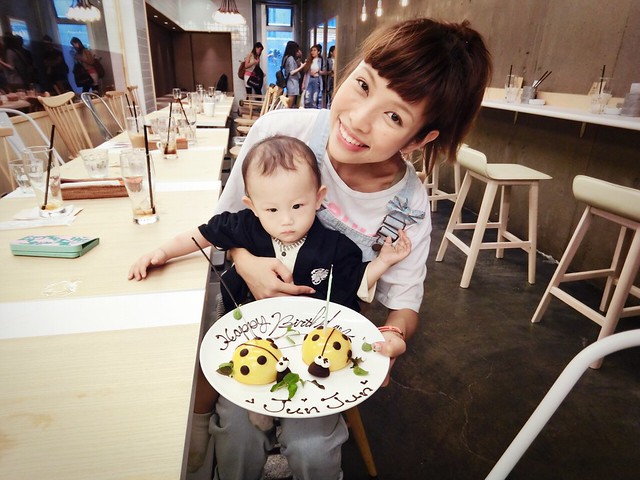 And of course, Thank you, NALU staff.

I have also worked as a dairy cow for a year!!! (Although now i’m just moonlighting.) Before i gave birth i thought i would breastfeed for a maximum of 3 months. (PASS ME THE CHAMPAGNE!! NOW!!!) Guess things do get easier and you could even get addicted to these stuff …

Now i want one of those certificates fanatic Breastfeeding Clubs give to mothers and i’m eyeing for the 7 Years Category… OMG LOLOL kidding ok, KIDDING.

I guess i have an excuse since it’s my name (sort of), and i also produce dairy. But i used to think stuff that mothers say are very lame. Who says stuff like “Oh sweety, you will forever be my baby!” to a 30 year old???? Or like, “Your smile is my biggest happiness“?? Right. Mothers. Soon i will also be saying “The police will catch you if you don’t eat your carrot“.

For being a one-year-old mother. 🙂