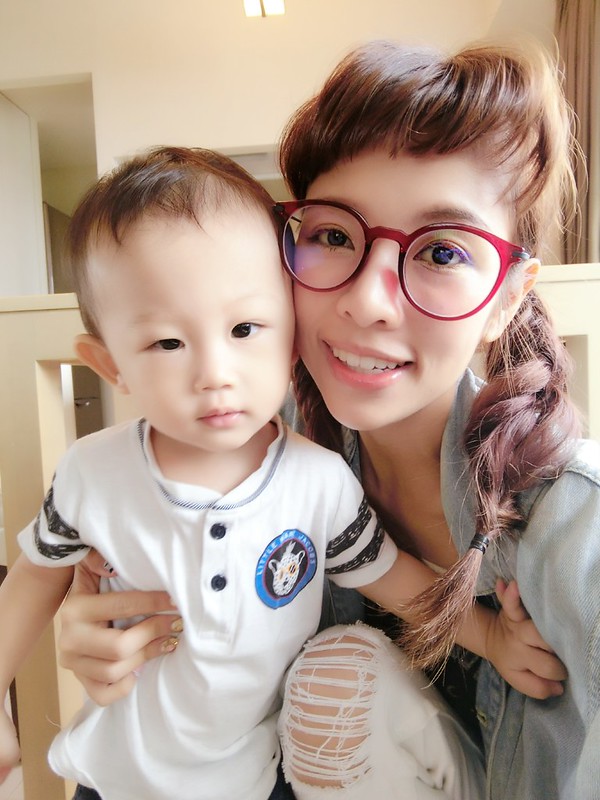 We have spent almost a whole month in Japan now. And this time around it’s been a very different experience. I felt like my baby has grown like a few years!!! It was a really fun and at the same time tiring month.

Let’s see what’s happened in the past month:

The biggest milestone this time is his language development! Junya not only has a a new set of expanding vocabs, he is also teaching me how to speak French, German Finnish and Alien. I am a bad student.

His favorite word now is “no no” and “open” (he wants to open everything that is openable). Instead of pointing at different parts of an object and look at me for approval, he now will point at something and tell me “no no“, before i tell him so lolol. Very very zi dong.

Our hand-holding romance has ended T_____T. It was nice while it lasted T___T. 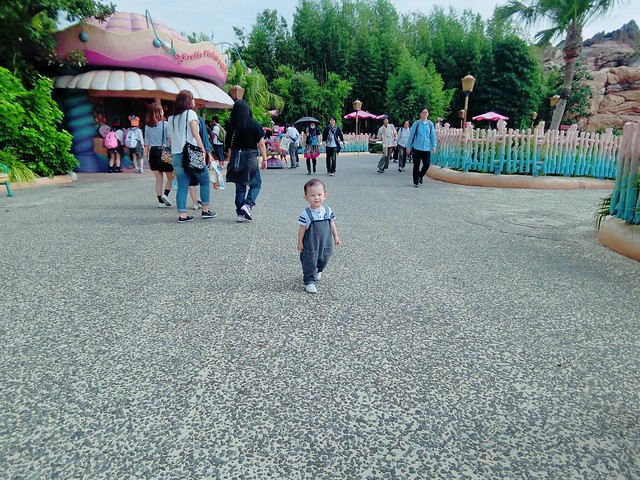 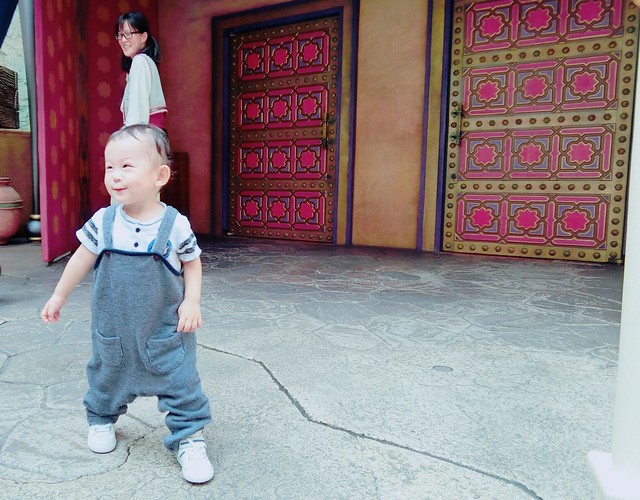 He is super happy when he gets to explore different environments. Which is fine except that he also doesn’t care if he rams into humans, strollers, bicycles, Disney mascots…. 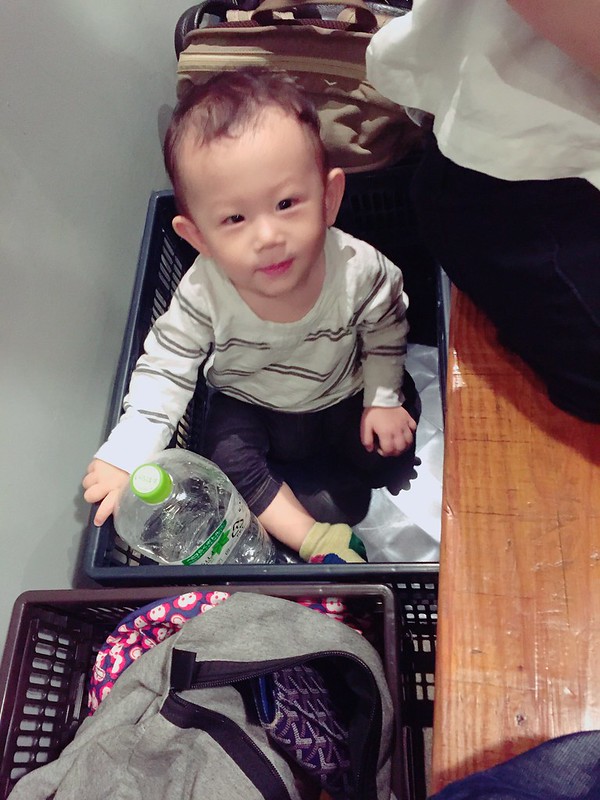 It also takes an Herculean effort to bring him out dining with us. He won’t sit still on high chair/couch. He wants to hide under the table and get me to catch him T___T.

Restaurants in Japan are not as tolerant as restaurants in Malaysia (unless you go to family restaurants). Bad toddler behaviors are often frown upon and although nobody will outrightly tell you off, it is really, really embarrassing to have to pick up your toddler who is lying inside the bag basket under the table or constantly running over to stare at the diner next table. T___T.

Even when i bring him to mama&bb cafes, i am almost always embarrassed because Junya is the most restless child in the entire room. I am forever super fascinated at how unbelievably well other toddlers behave. They just sit in the high chair like clockwork dolls, opening and closing their mouth rhythmically. How did the moms do it?????? D:

For a few months now, every time there’s silence in the house (usually Junya will be banging vehicles or talking to himself), it must be him concentrating to poop.

And a few days ago, he ran to me after a loooooooong silence, with a very coy expression, and softly said to me: poo poo.

YES OKAY MAMA CHANGE FOR YOU. 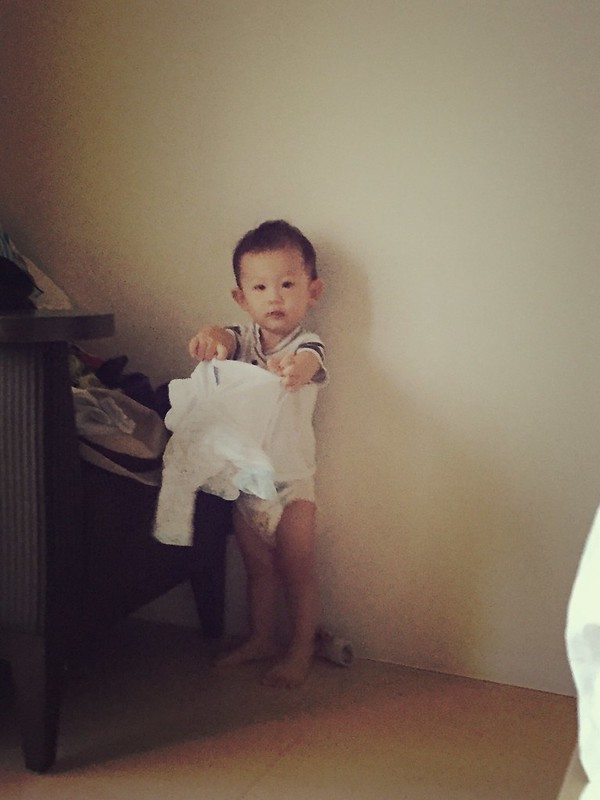 Junya’s favorite vehicle happens to be the bus for unknown reason. 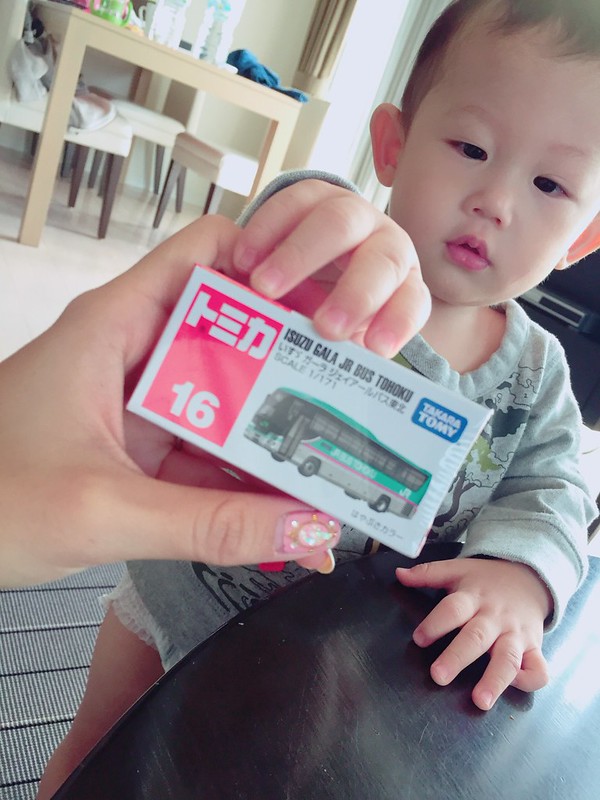 In fact, another one of his favorite words is “bus”. When he sees a truck, he says bus. A van? Bus. The train? Bus. It’s not like he couldn’t differentiate though, he just wanted me to give him an opportunity to announce his favorite transport. He likes to see me correct him before he incorrectly corrects me back. 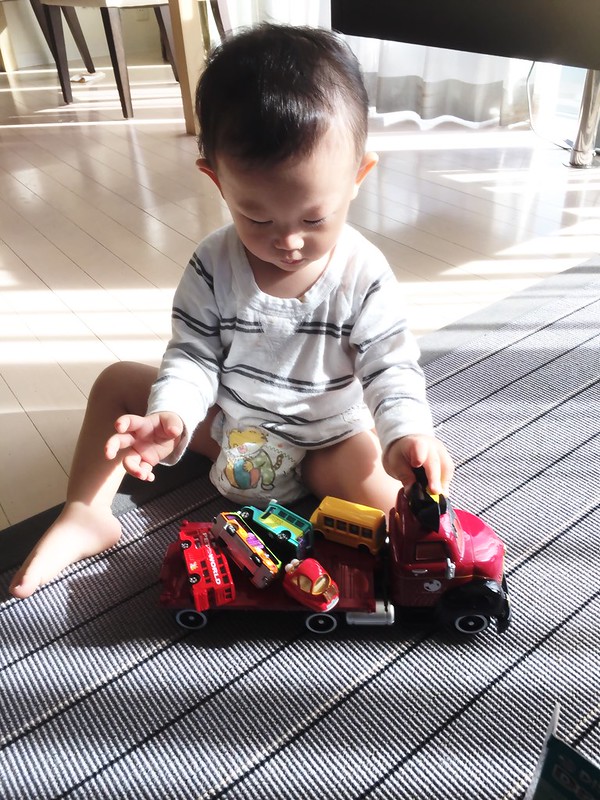 Fine. Now in his Tomika collections are all different kind of buses. You are welcome, son.

In fact when we sing songs (and me trying to get him to finish a line), it goes like this:

“How i wonder what you?”

As for animals, it looks like our Shiba is not the favorite anymore. 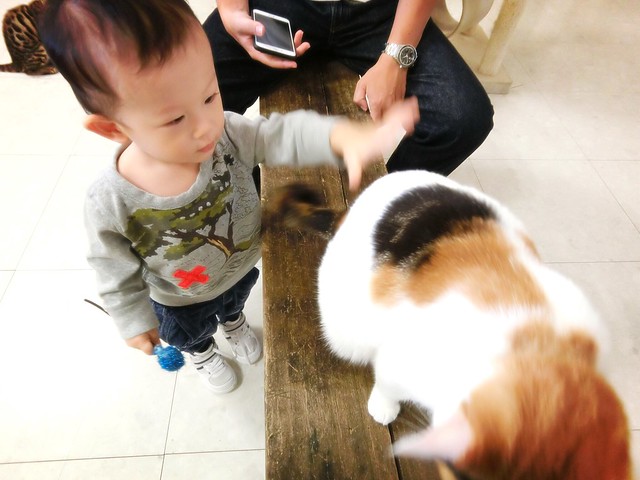 For some reason Junya looooooves cat. He breaks into giggles as soon as he sees a cat, any cat. On the street, on magazine, on TV, on my tissue pack (it was a baby seal). 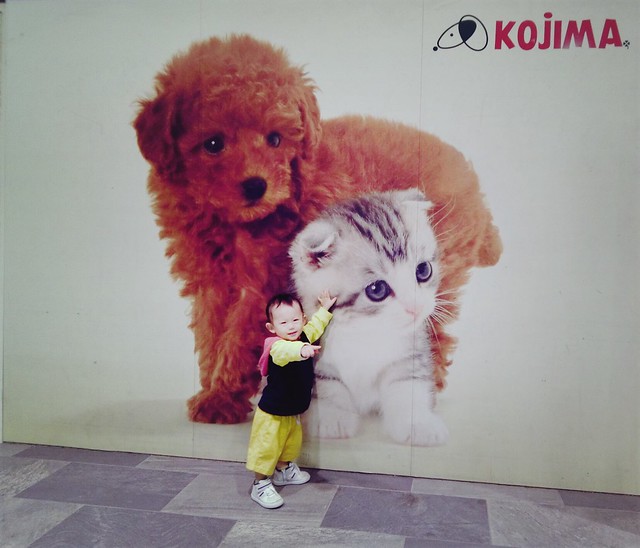 What are we gonna do, Champon?

He has been kind of cranky lately since 90% of the things he wants to do are things he’s not allowed to do, but when he is not throwing a tantrum he could be sweeeeet till i get an instant decay omg. 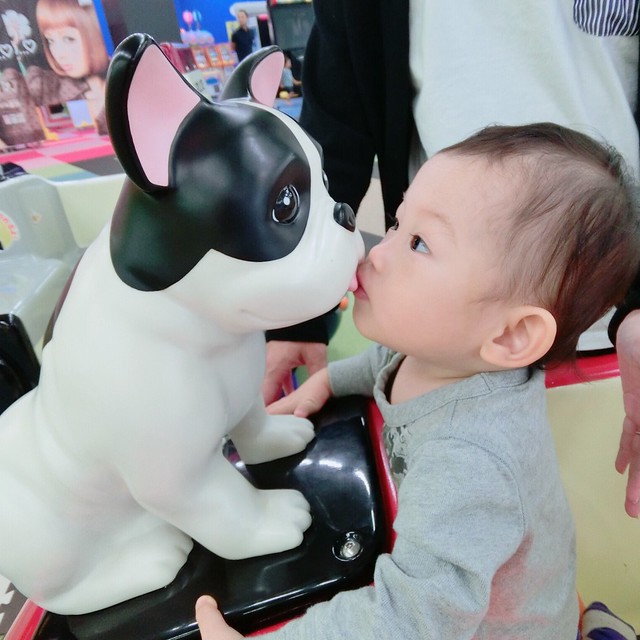 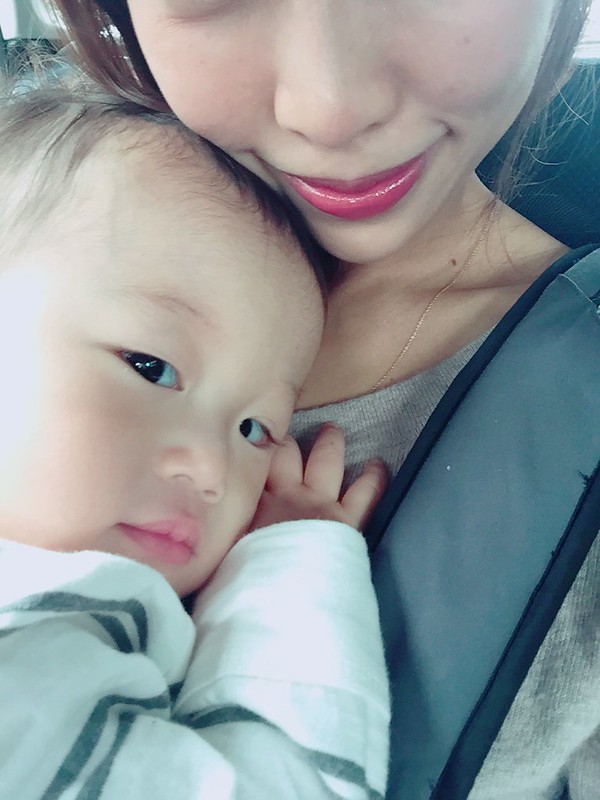 He can also be very sticky especially when i’m doing some chores, he’ll run over and hug my legs lol.

And sometimes when he wakes up in the middle of the night, he’d call out “mama!” and then roll over to my side and then climb onto me and cling on to my body and sleep like a koala on a tree branch lolol.

He finally got bored of pre-packed baby food T_T. He spits out everything that comes from an aluminium packet.

It’s almost like he knows it and tells me, mama, please make more effort to cook… OR BRING ME THAT DRUMSTICK! 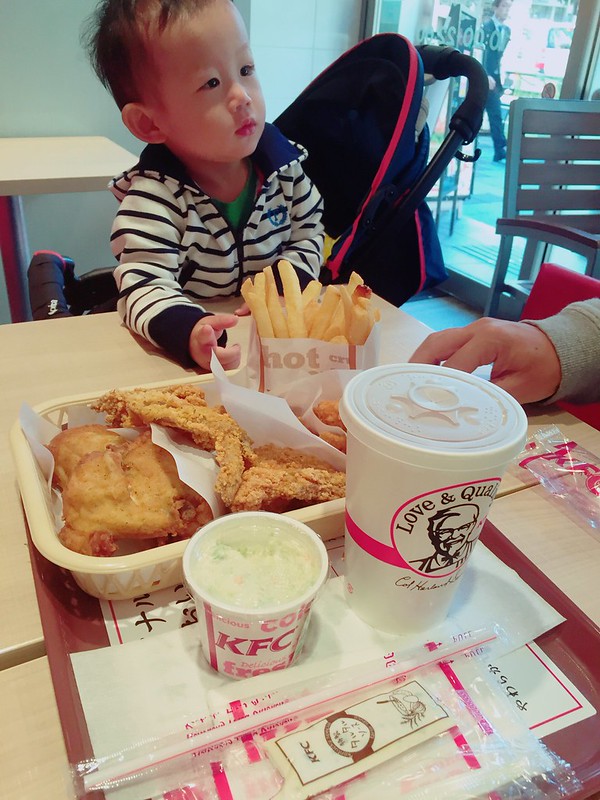 So yea most of the time now he’s eating what we adults are eating.

So far he has drunk ginger ale, Calpis soda, random juices off the counter, mama’s beauty drink, and eaten Champon (the noodle, not the pet) sandwiches, first french fry in his life, a small piece of KFC, gyudon, burgers, combini pasta….

It looks like i’m ruining my own cooking life introducing all these Japanese-standard no-turning-back tastes O.o. 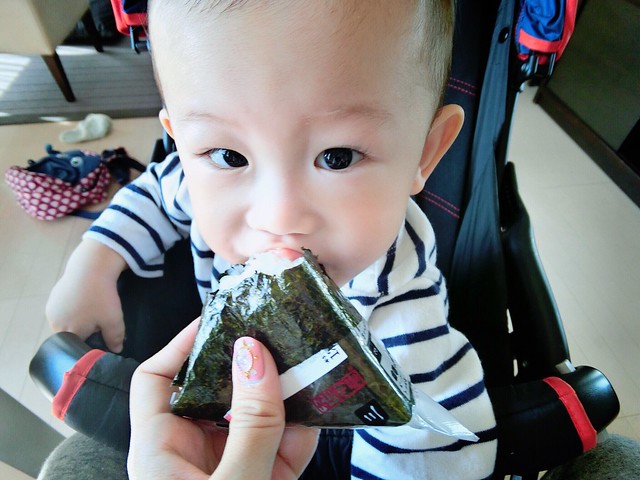 Instead of formula, i’m giving him cow’s milk when we are in Japan. 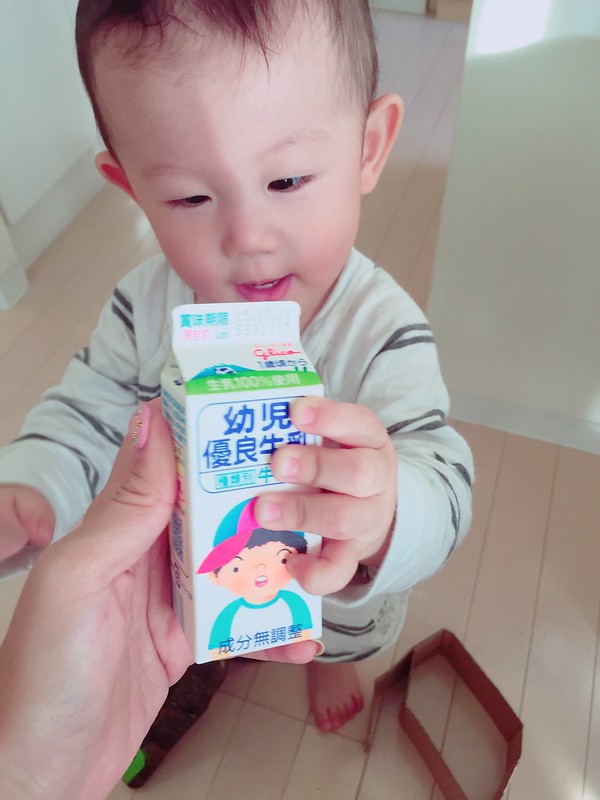 I bought lots of canned formula in Japan but i thought hey i should stock them up and bring them back to Malaysia, and while we are here, let’s enjoy fresh milk!!!

Speaking of milk, finally i have successfully weaned him off nursing!

I had to leave him for Japan for work a few weeks ago and i thought it was a good opportunity to try to get him to graduate from the boobs. I told him to say goodbye to oppai a few days before i left, to mentally prep him for it. When i was away he seemed fine with just the bottles, but i was quite worried that once i came back he’d want to nurse again (which by the time i should be all dried up liao T_T).

But i underestimated him. It was me who was not ready who wean. It sounds a little weird to say it this way, but it was like a bad break up. Turned out i was the one who couldn’t let go while he thinks it’s time he cut it clean.

During bath time when we were both naked (usually he couldn’t resist bath time nursing lol), i couldn’t help but asked him, JunJun, you want oppai? He just gave me this shy smile, touched me briefly and said “oppai” and smiled again, hesitated a little, but didn’t do anything further.

I was shocked. Honestly I was a little disappointed (my baby doesn’t need me anymore!!!) but at the same time i suddenly had so much respect for this little boy. When you give something up, you give something up. My 1-year-old son has got better principles than me. (I am always a very, very, very bad breakupper/breakupee.) He’s gonna be much better at relationships than i was. Thank you Junya, for teaching mama such a precious lesson.

And it was a good decision! After weaning completely, Junya sleeps soundly throughout the night almost constantly.

Where are you, JunJun? 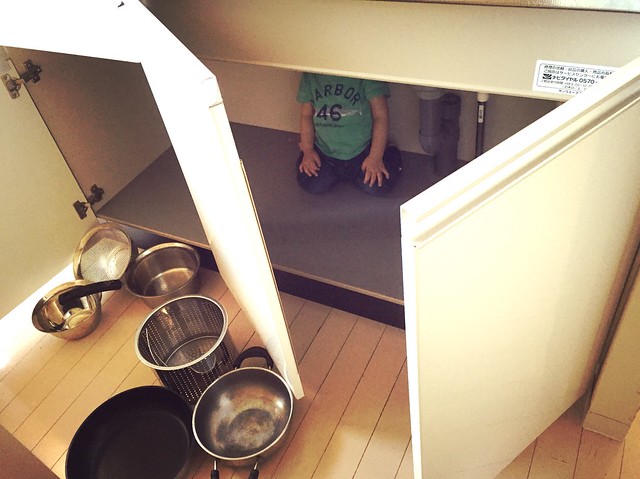 is the game we play every. single. day.

And this pretty much sums up my daily life in Japan: 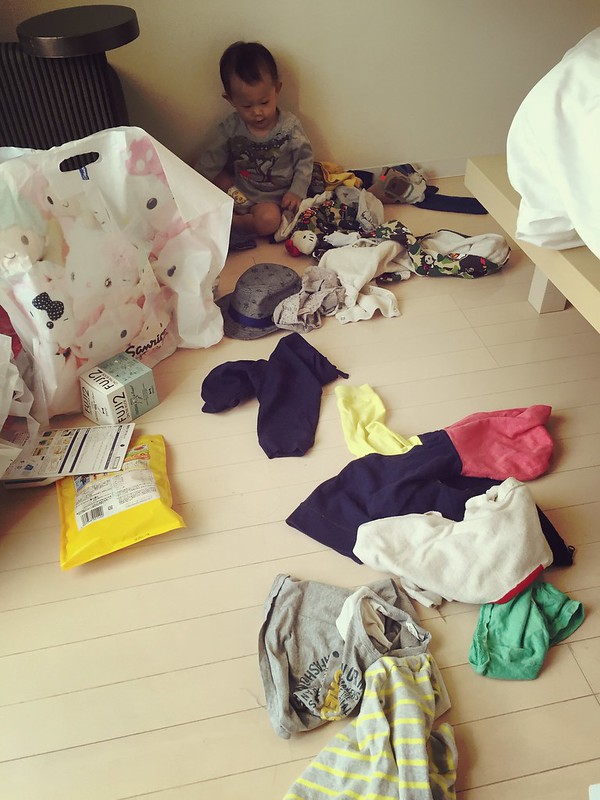 And then repeat step 1-3. Endlessly.

Back in Malaysia we have our helper so things are sooooo much easier, and i may have taken it for granted. I truly, truly admire Japanese moms who are doing it all on their own, especially those with like three kids??? And yet they still look so flawlessly stylish??? They are my greatest inspiration.

I have been soooo tired that i hardly even go out now, but being in Japan and the fact that we are breathing such amazing Japanese air is already the biggest bliss and happiness now.