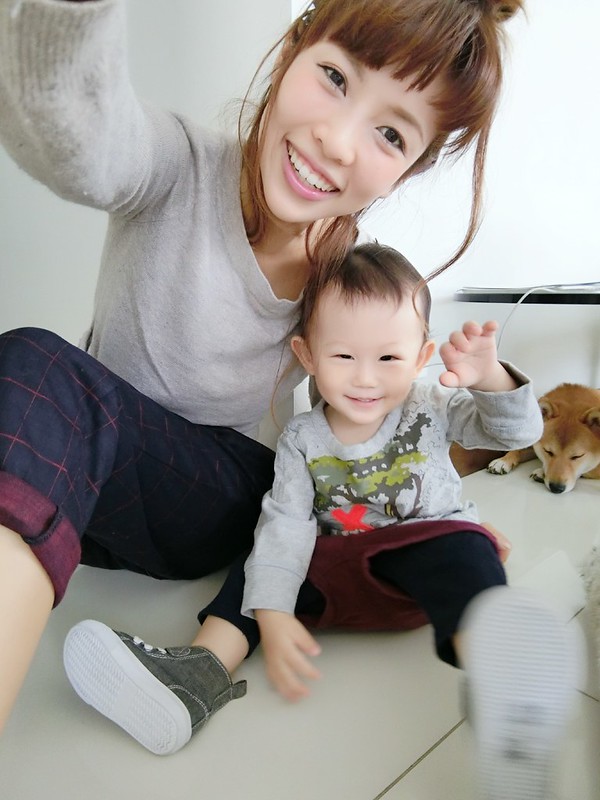 Having a baby probably never has been this fun AND tiring before. True, when they are first born you probably get like 2 hours of sleep each day, but at least they go to sleep. But now that they are awake almost as much as you do, you are just gonna spend the whole day between preventing them from setting fire to the house and consoling a wailing toddler who doesn’t understand why they can’t set fire to the house, 500 times a day.

On the plus side, it was a whole month of improving interactions. Which is soooo much fun. (Until, of course, they get bigger and you just wish they stop talking for a second.)

So this is what happened in the past month! 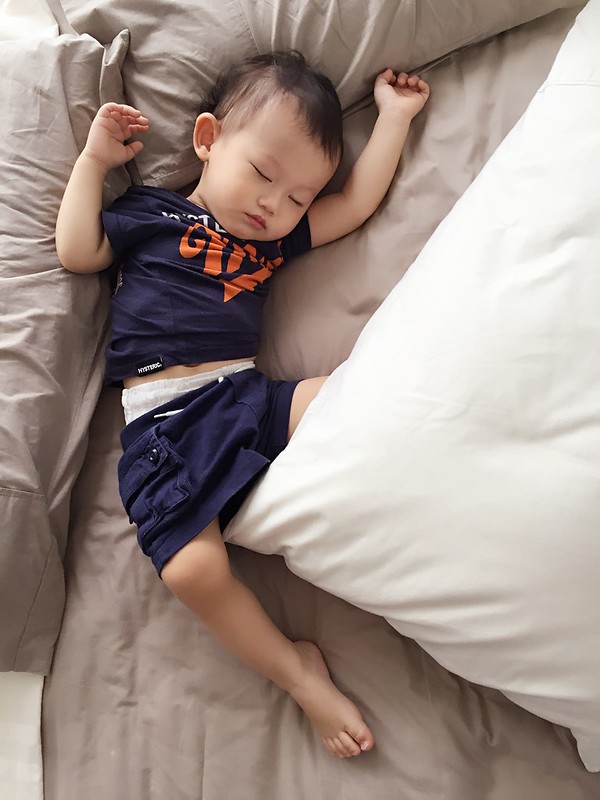 One day, Junya decided that his nap time is 11:30am. (It used to be 9-10am once, then 2-3pm once.) He sleeps for about an hour plus, and then just stay awake till the rest of the day. It has stayed this way ever since that day.

From two naps transitioned to one nap, i actually am secretly very happy about it!!

First of all his nap is longer (one to one and a half hour), i can do the cooking and finish up some work, and not having a second nap also means… he sleeps earlier.

He’ll have his dinner at 5pm, and then go to bed latest by 8pm. When he’s tired sometimes as early as 6:30pm. XD. More freedom for mama in the night time! Yay!! 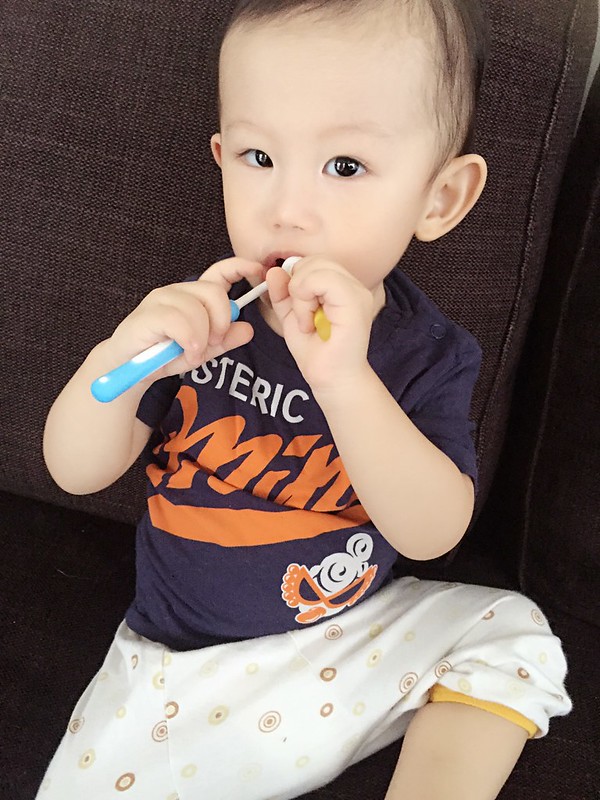 Junya is put through a very strict teeth brushing routine because the danna is very paranoid about him getting tooth decay.

In our house we have 4 different toothbrushes for him (expecting more to come) so he can choose the one he likes (different choices every day) and brush his own teeth. Of course he doesn’t understand the importance of teeth brushing yet so mostly he’s just biting it with his gums -___-. And he doesn’t allow us to brush it for him -___-.

To make sure he’s brushing properly, tooth-brushing time is the only time he gets to use the iPhone and watch videos about… tooth brushing lol. But hey those Japanese anime is crazy entertaining! I think it really helped to keep him engaged in tooth-brushing a little longer. 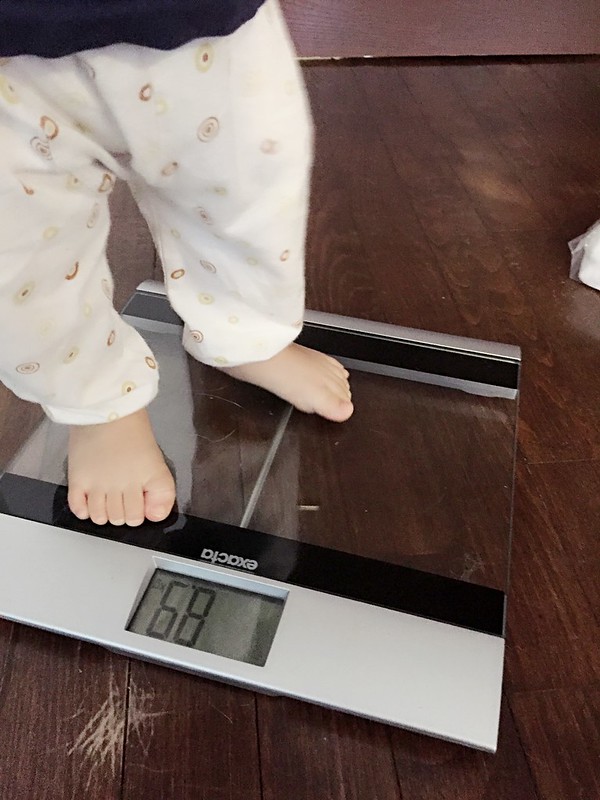 Not even 9KG yet at 17 months! But i’m no longer worried about his weight because he eats really well, and is getting much taller! I know because he is now able to reach more and more cabinets/drawers/door handles… -___- 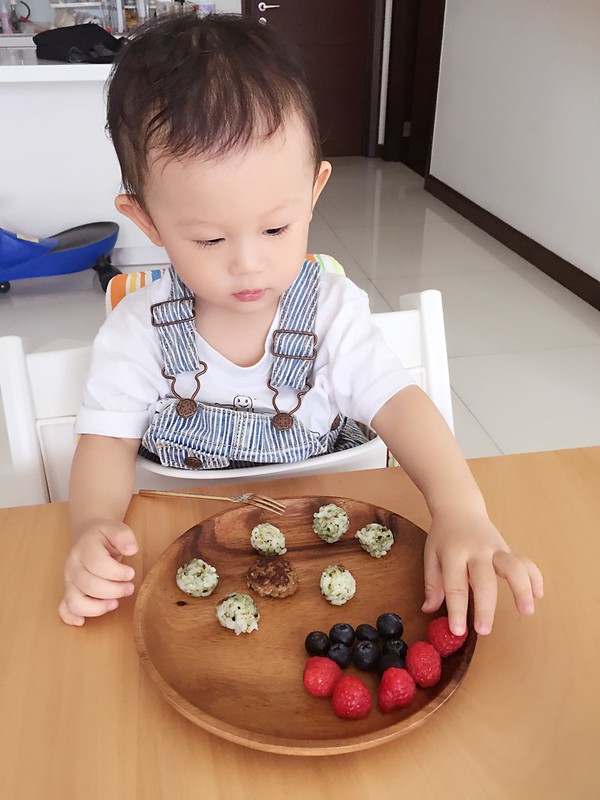 I realized that for some reasons he loved ball-shaped food! Ever since his first encounter with ikura (salmon roe) which he kept calling “ball ball”, he has expressed interest in round-shape stuff like green peas, blueberries, even edamame.

So i started making everything round so he’ll have to eat everything XD. 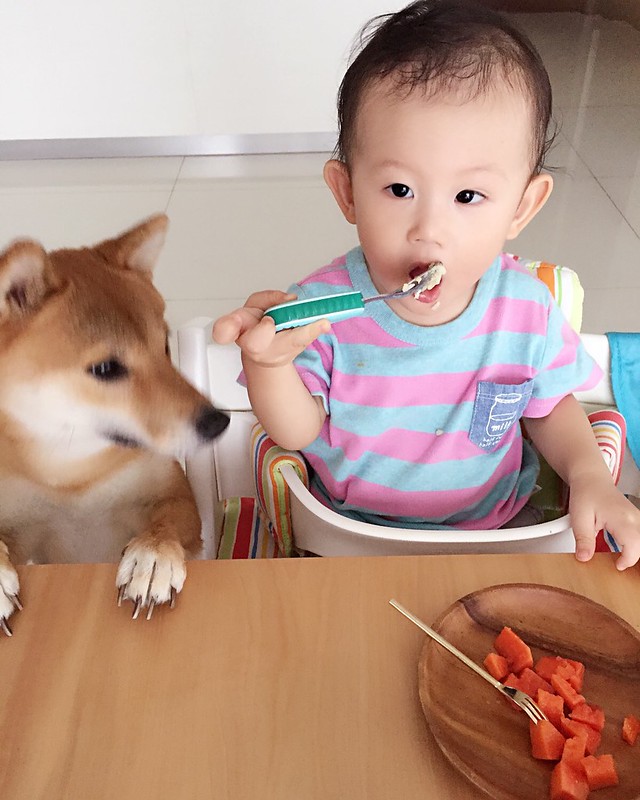 Also he is starting to clumsily use the cutleries. He can’t scoop food with spoon yet but he’ll poke randomly with a fork as if he is fishing lolol. When he happens to successfully catch a fish (big or small) he’ll be soooo happy!!! 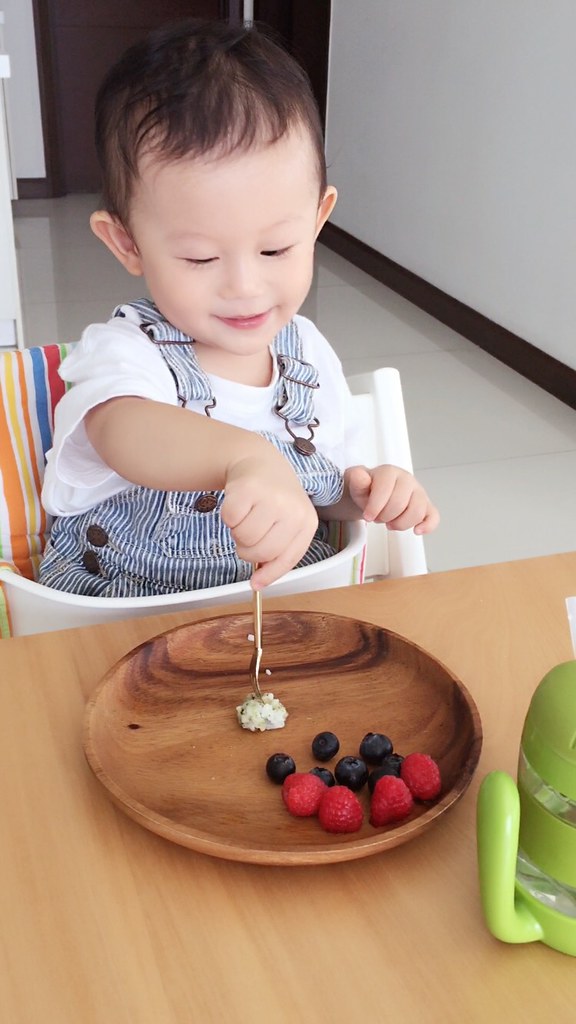 He will start to miss Champon. When were are out, sometimes out of nowhere he will say, “Ponpon.” 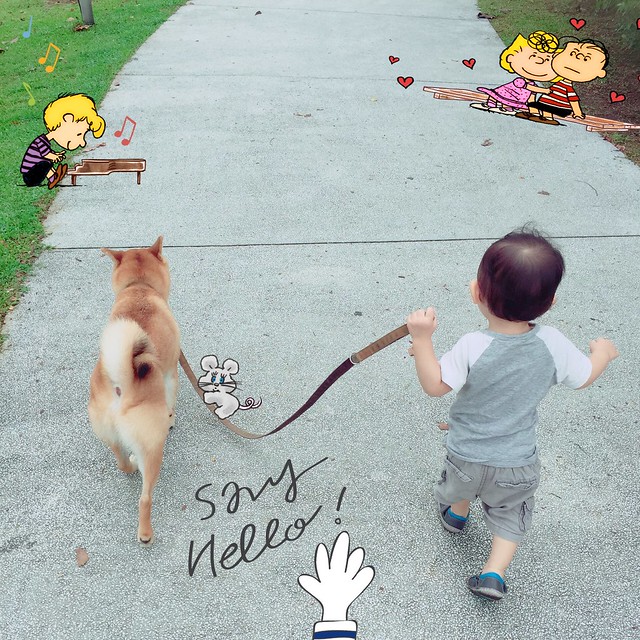 I guess cuz he really is Junya’s first ever friend.

He started to understand that being sweet gets him lots of good stuff lol. (Of course, he knows too well that, tears do do.) 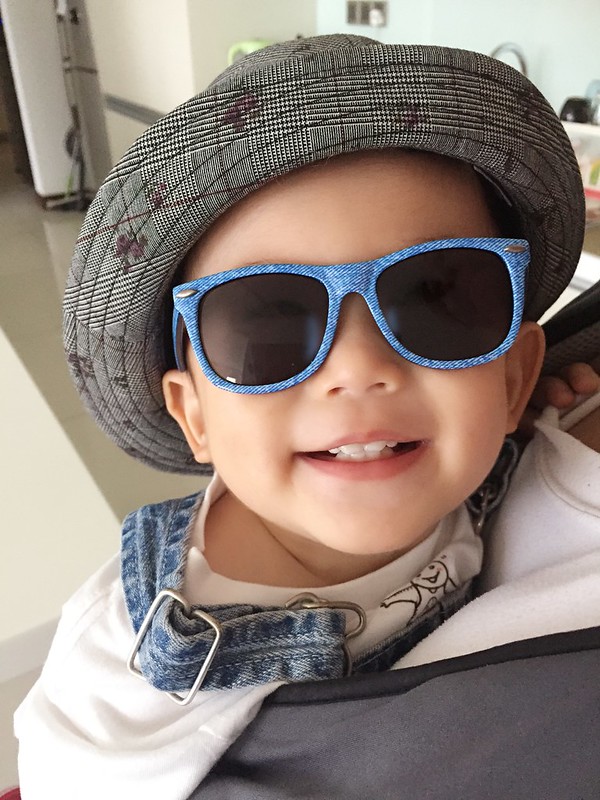 He smiles and plays with strangers (when in a good mood).

Junya hardly meets his grandma (maybe once every few months) but when we went back to Seremban recently. Junya suddenly demanded to be carried by popo all the time!!

Waaaa dunno is good actor or really learnt how to 讨人心 lol. 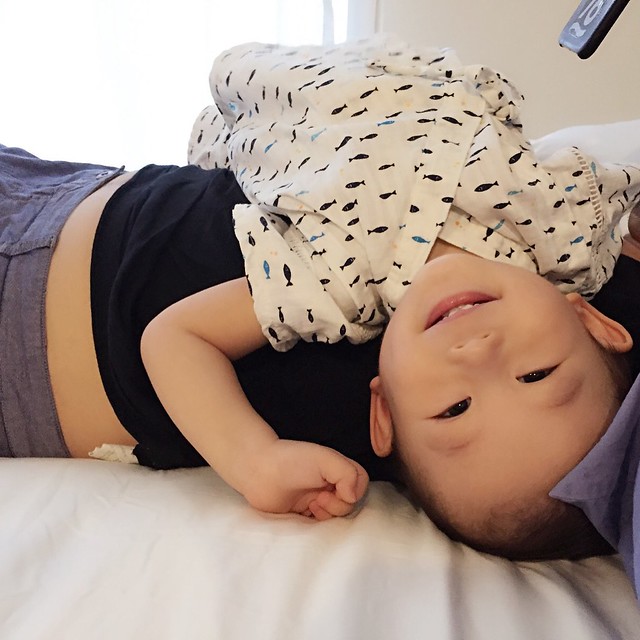 When i read back the post on 14th month, Junya still didn’t like to call papa. But now he’s papa papa all the time so now papa’s flower heart bloom even angrier (心花怒放) lolol. 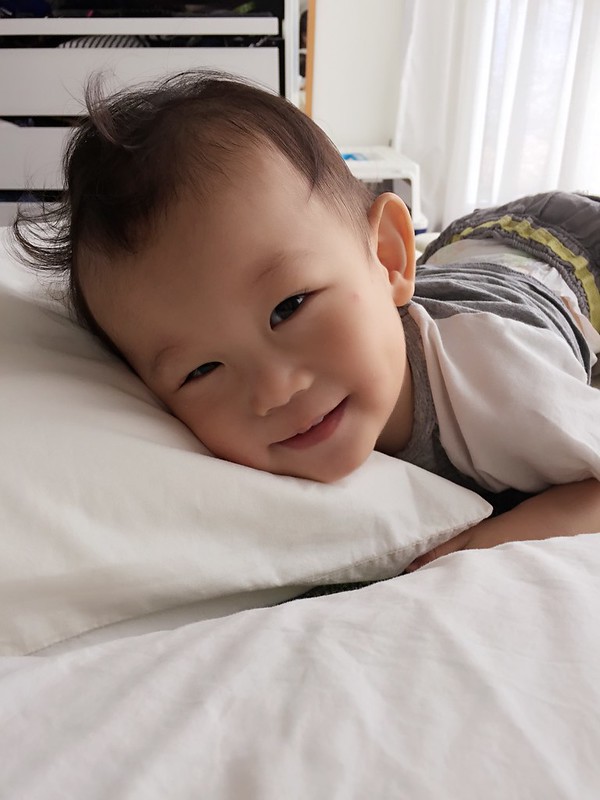 When he wakes up now, (sometimes at ungodly hour of 6am), and if all of us are still alseep, sometimes he will just play by himself and have nice conversations with the ceiling/walls/fan.

And then when we wake up finally, he just gives a smile that is really the best ever way to start a parent’s morning. ^^

He also learns to take control of his own life by letting us know what he wants.

You wanna go to the market?

(in the bath) You want water over your head? 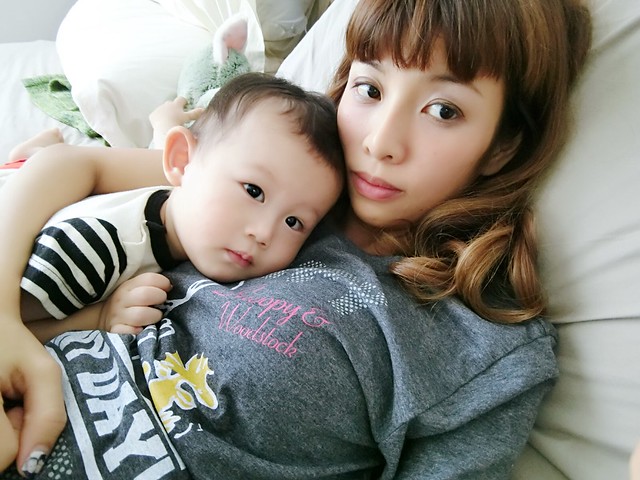 One night i was singing songs to him to coax him to sleep.

There was a farmer had a dog and Bingo was his…

What? His name is Bingo.

…. Fine. There was a farmer had a dog and Mago was his name-O.

Junya you want to listen to songs?

(proceeds to sing a song)

I’m probably not the best singer in the world but still, ouch. T___T.

I learnt that instead of telling your toddler what not to do, it is always better to tell them what they can do. So i started giving him tasks so that he’ll feel that he is useful and achieved.

For example getting him to fetch his own diaper and bring it back to me to change, or get him to throw rubbish into the bin. He loves it.

I mean, perfect, right???? Now you have a proud little toddler and a happy mom who is getting some help with chores!!!

Well. Except that he is also overly helpful that he fetches like 15 diapers to me at one go, and keeps coming back to ask me for new rubbish to throw. -____-

A pat on the back

I have no idea why, but every time i carry him now, he will give me gentle pats on my shoulder. Like, life is tough, mama, but it’s okay. I gotcha.

Junya almost understands all the basic things we say in the house, even though sometimes we thought he didn’t. He can repeat almost every word we say now at first try. (Blue! Boo. Pink! Bing. Smell! Mao. Fork! Pork. Spicy! Baicee.)

It’s just soooo fun to talk to him nowadays.

Junya we go to the…?

Not only that, Junya has also picked up his lame pun skill from his mama, accidentally.

One day he pointed at a bottle of liquid.

Another day he asked for banana. And then he decided that he didn’t want it anymore.

And Junya also has a big announcement to make! 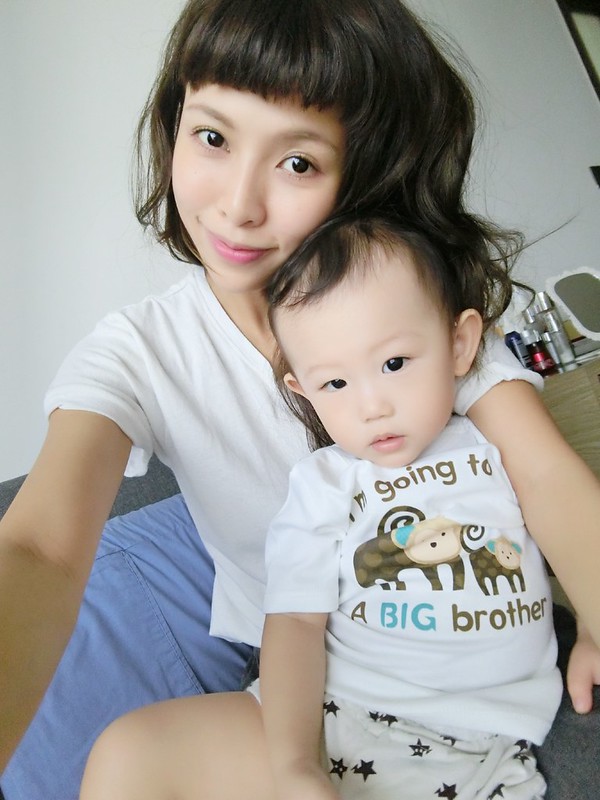