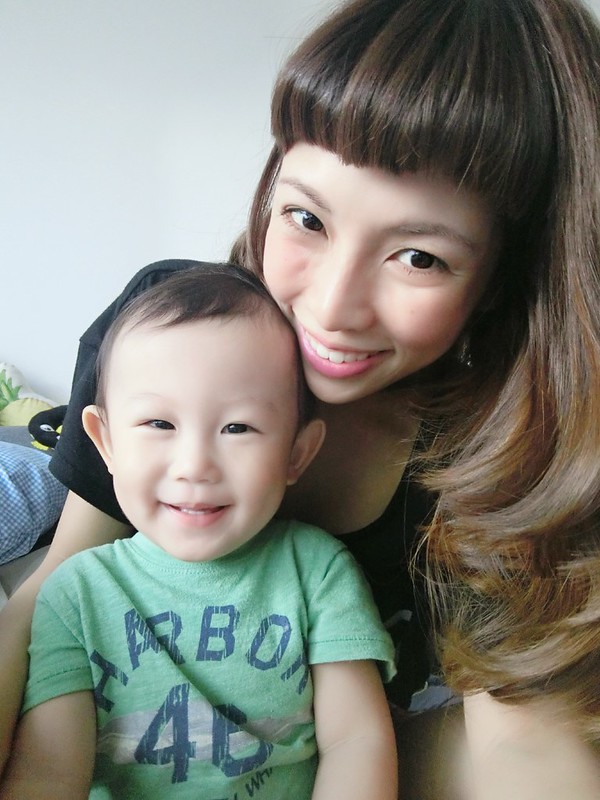 The past month had been a little more physically relaxing as i cut down a lot of work to take more time for some proper rest and also to spend more time with Junya. There are other kinds of stress though, like one after another our family members fell ill, and trying to prepare for a massive lifestyle change (we may temporarily relocate to Singapore!!). We were faced with a lot of dilemmas but i guess we are lucky enough to be able to make choices in life.

Here’s what happened in the past month!

He is asking for more and more attention now that he knows how to. Instead of fussing, he will now grab my hand and say “mama, come.” (He will also make me do things for him, for example grabbing my finger to scratch an itch for him lolol).

And theeeeeen he learnt a new word, and it is called “carry“. And that’s all he says. The. Whole. Day.

I guess that’s kids for you. When you wish they let you carry them instead of toddling around, they rather fall down 5 times in 10 steps. Now that you wish they would just walk, they want to be carried 23 hours a day. -_- 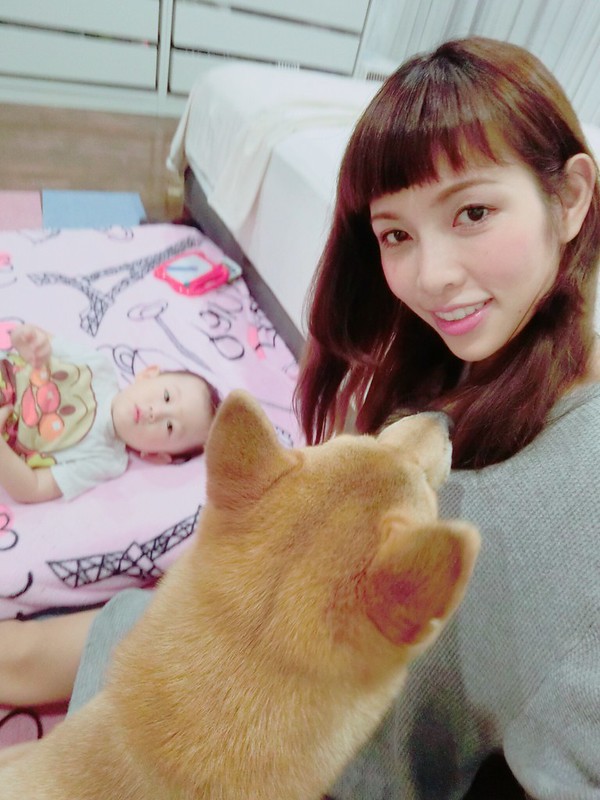 I made him a “Big Brother Bed” cuz obviously our bed can’t fit one kicking toddler and one new born when number two is out. I was quite worried about the transition so i thought of i’d better start the training now. We still have quite a few months ahead and it should be sufficient… right?

Erm. It took only one night. 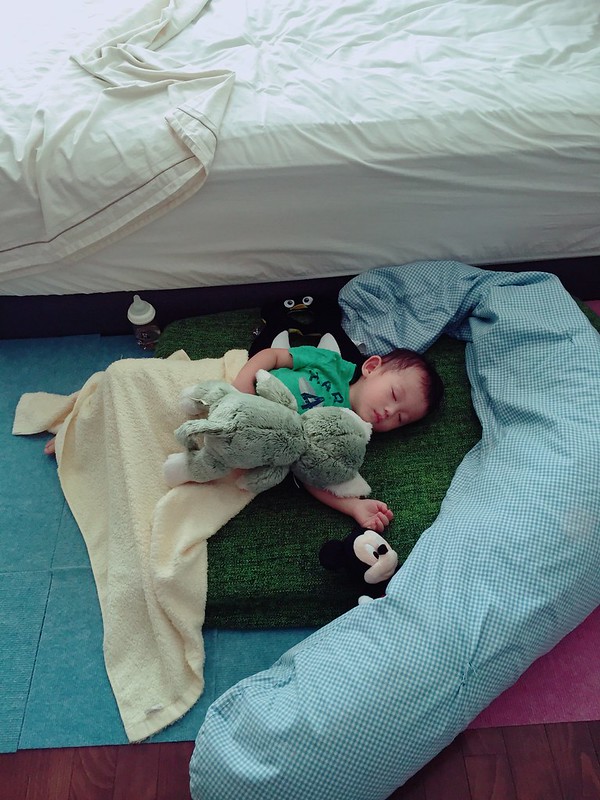 Fine. I’ll admit it. The second night i missed him so much i moved him back to our big bed -_-.

I have been sending him to play classes on and off, but this month i decided to change him to a nursery+play school.

Yeap. I just drop him off, leave and pick him up after 3-4 hours.

(Actually i secretly waited outside the glass door and peeked inside for half an hour and then spend the rest of the time at a nearby cafe waiting to pick him up again. I mean, don’t all moms do that the first few days of school? XD) 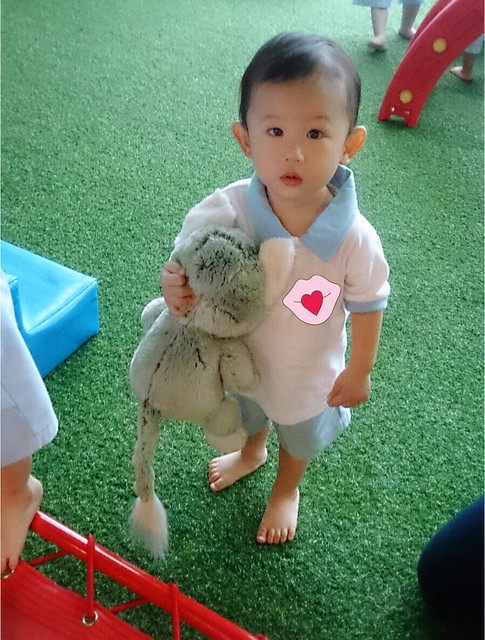 He still cries every time i drop him off but according to teachers, he is adjusting really well at school! He just constantly needs Gelatoni by his side ^^.

A lot of people think 1 year old is too young to go to a school, but i’m running out of things for him to do at home. I can’t be next to him flashing him picture cards and building blocks alllll the time even at home. And i can’t be telling him to stop opening all the cabinets or just give up and rearrange all content in cabinet every 15 minutes while occasionally picking up broken pieces. He is bored of all his toys. (I don’t want to buy new one every other day). I don’t want to think about TV or iPad. I wondered how kids spend their time in my generation. I mean, nobody goes to school until like 5, right? What on earth did we do the first few years of our lives? @.@

So time for the teachers to do their job and i think it’s never too early to learn to function within a community outside family for a brief time every day. I don’t want him to be socially awkward like his mama. XD

But whenever possible, i want to do fun things together as a family. 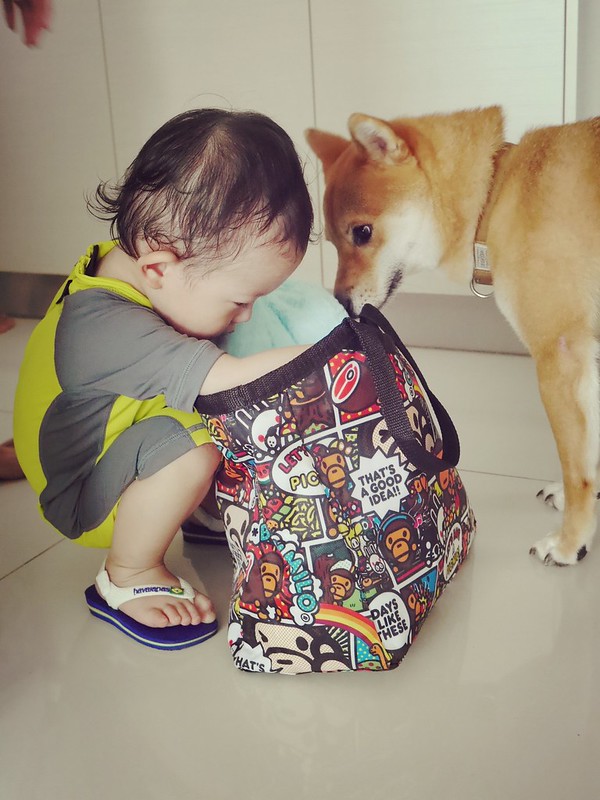 We go to the pool more often as the spell of obnoxious haze has broken. It’s soooooo nice to go outdoor again. Thank you, pretty sky and clean air. 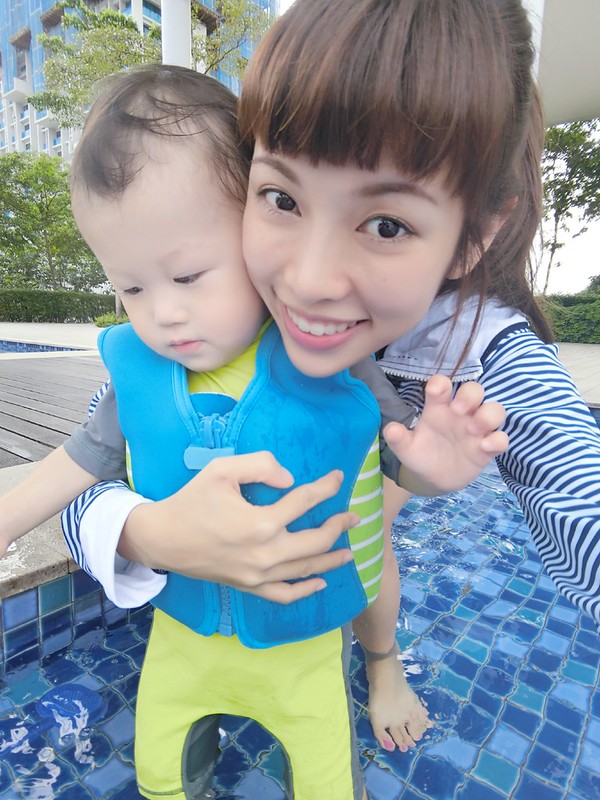 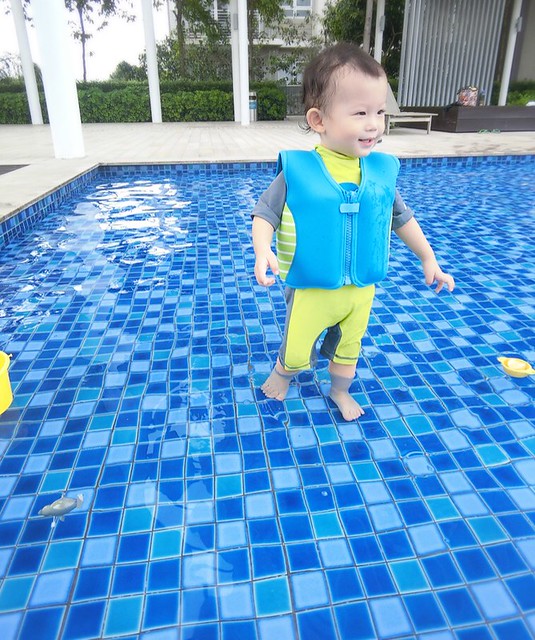 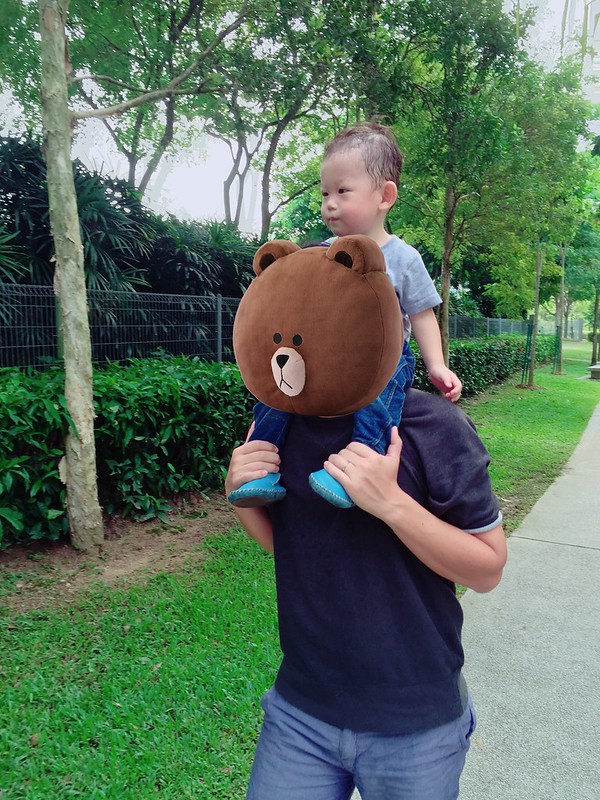 We don’t even see papa half the time now because of his frequent travel overseas. T___T. But whenever possible he tries to make sure Junya still recognizes him as his father lolol. Even just a brief walk at the park or morning cuddles. 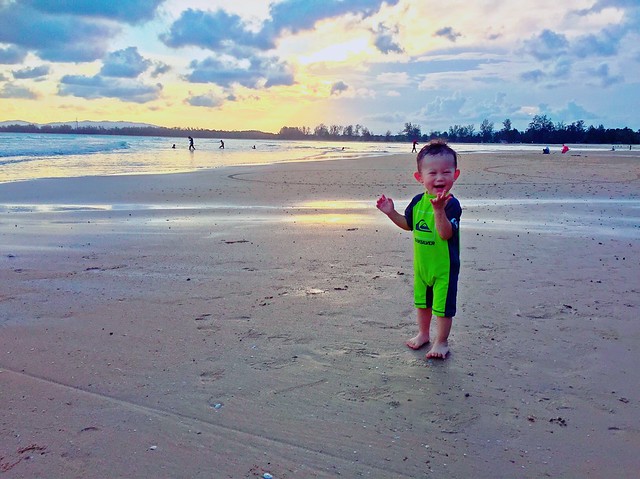 We went to Cherating for the first time! Papa’s surf time and JunJun’s turf time. 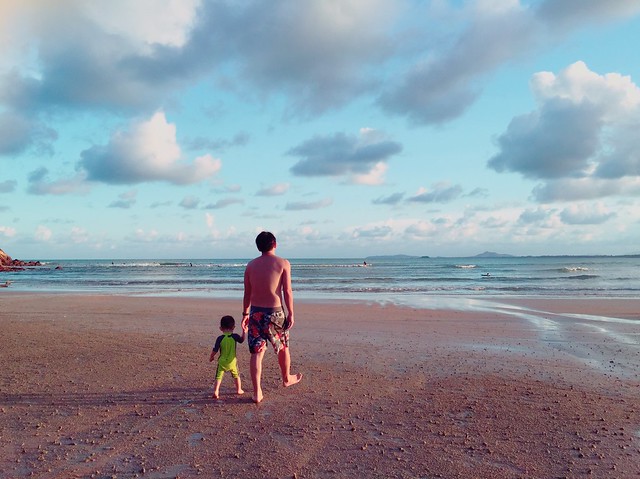 Frankly i was amazed at how strong Junya is his entire one and a half years of life. The danna and i and even Champon probably fell sick at least a few times in the past year. But all he had was a couple of expected fevers after vaccinations, and usually they were gone in a few hours and he was up and crawling/toddling again. Not even a sniff or cough i heard.

Buuuuuuut last week he had a high fever for the first time for unknown reasons. 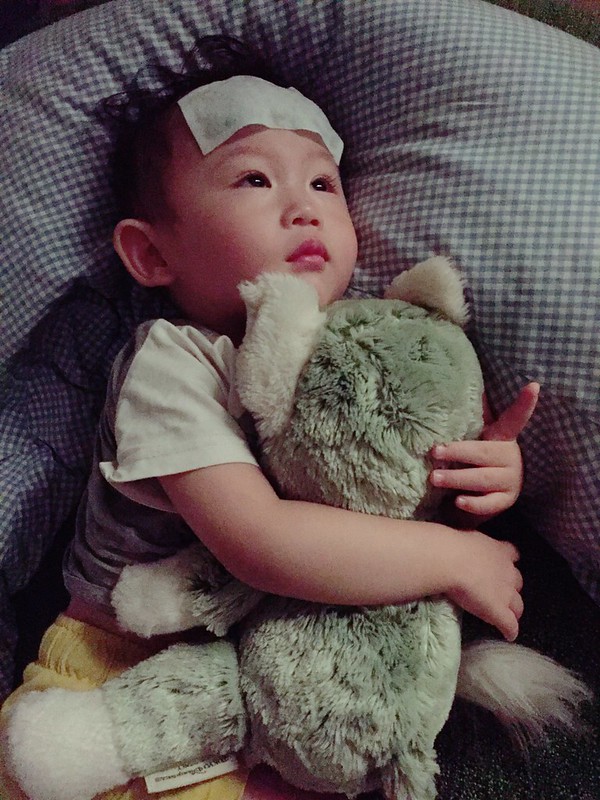 At one point it measured 40 degree Celcius and i was the one who almost fainted. It went up and down and i kept taking his temperature every 5 minutes and eventually in midnight he was down to normal temperature.

(And the next morning he was up and running again.)

Really, now the more i understand the cliched “all i wish is for him/her/them to be healthy and well“.

I make it a point to speak as much Japanese to Junya as possible nowadays because i realized he is predominantly exposed to English (school, and almost everyone around him) and i also realized that prefers to speak English because it is much easier (try “fish” over “sakana” and “please” over “onegaishimasu” lolol).  It would be a waste if i, who spend probably the most time with him, also speak a language that he already knows.

(How about Mandarin? Yes that too, but maybe later in school, because you can’t really learn Japanese in local schools here. And i will start forcing all my friends to speak Mandarin with him lol.)

I was told that it is much better if one parent stick to one language (instead of mixing languages for both parents), because kids usually switch languages much easier with different people than the same person.

At first i thought he must be confused as hell but after a couple of months of practice, i know that he understands.

It really amazes me. Although he will mostly reply me in English, he understand what i say to him in full Japanese. His popo (grandma) spoke Mandarin to him probably for just a few days, and he picked it up real fast too, although mostly by just parroting.

Young kids are indeed geniuses. So if your family is bilingual/triligual, your children are really really lucky!! Please do practice with them! 😀

I’m not sure if i am busier or have more free time now. 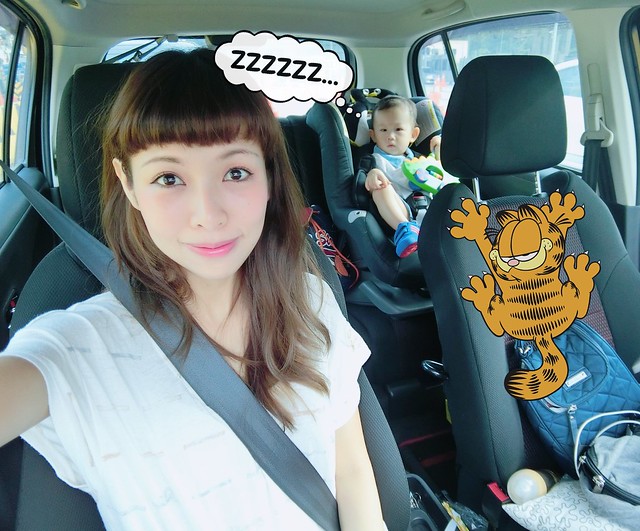 Every morning i drop Junya off to school and i’ll have a few hours to do my work and take some time to think about stuff i didn’t have time to. But it also means i’ll have to wake up extra early, make sure i fix everyone’s breakfast, and spare extra time to get stuck in jam (not fun).

The future is daunting. Just as i have established a nice, peaceful routine, our lives are gonna be all messed up again.  As i said earlier we are probably going to move to Singapore for a period of time (dunno how long yet). And by the time we are adjusted to our new life i’ll probably have to come back and give birth omg. (And i still forget that i’m pregnant most of the time omg.) 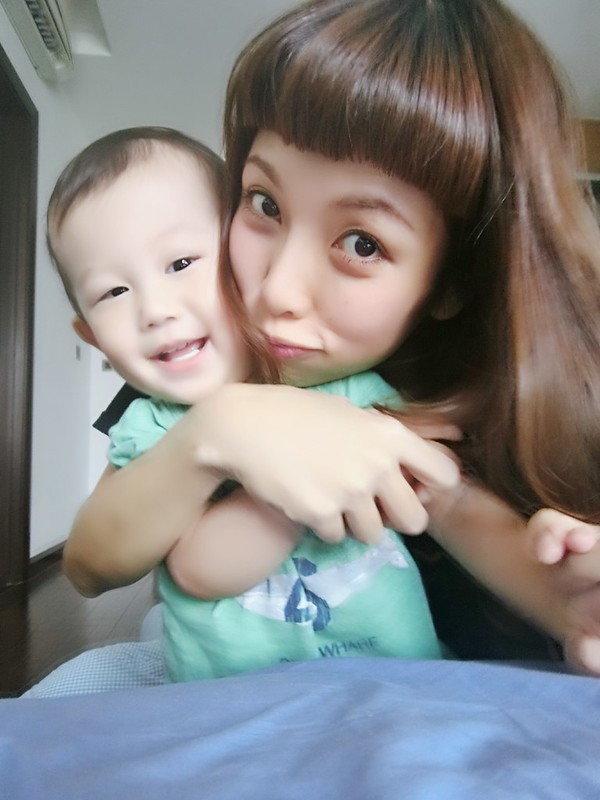 But… i guess boat come to bridge naturally straight? 🙂