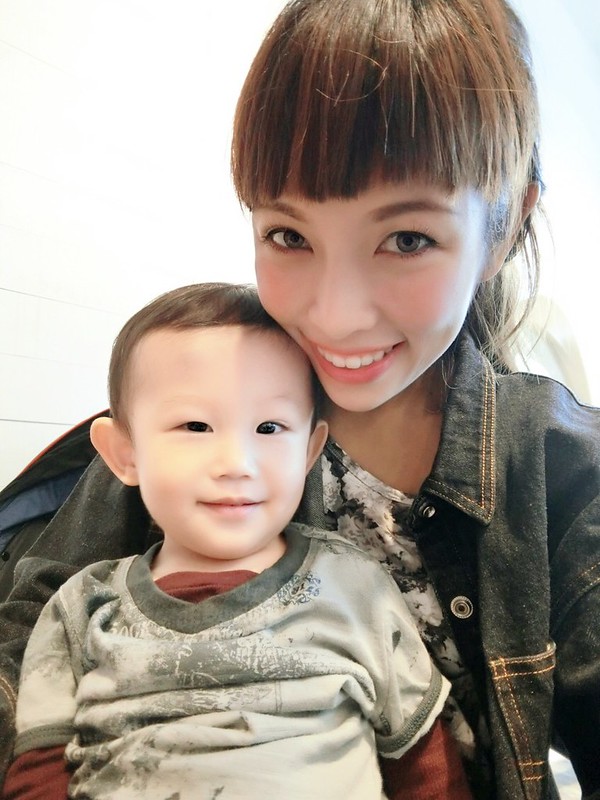 This is really my favorite kind of blog post! I look forward every month to writing this and see how my little toddler has progressed!

From an infant who can only flail his arms and cry out loud for milk, Junya is starting to understand how some small little things of a big, big world work. He understands more and more objects and actions. When we watched a movie together (Dawn of the Planet of the Ape), he pointed at the TV and said “monkey!” when the apes appeared and then turned to me and said “kiss, kiss!” in a curious expression when the two main characters exchanged a smooch.

He knows what things belong to who. When i picked him up from school one day, i asked him to go fetch his shoes. He not only did fetch his own shoes, he also fetched MINE. And said “mama, shoe!” 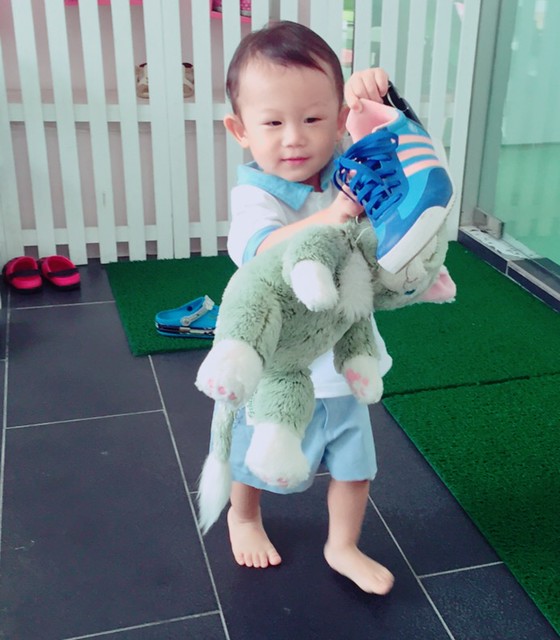 When we want to go out, he would volunteer to fetch papa’s shoes and mama’s shoes, and then last his own shoes. So sometimes papa will have to end up wearing his beach slippers to a nice restaurant for dinner lol.

He also knows emotions. Champon was barking in protest cuz he couldn’t get a tasty chicken, and Junya looked at him with concern, turned to me and said “Champon angry“.

One day i was reading his bed time story, and then i pretended to be a monster and growled at him. For the first few times he giggled, but when i did it louder he said, “No no, scary.” and turned over.

He will call himself JunJun. Every time he sees my iPhone screen saver or Instagram pictures (which are mostly pictures of him hahaha), he’d smile and say “JunJun!” . Ok already so vain at 18 months old lol.

He has more and more requests! When i sing him bed time songs, he’d stop me half way and say “bus“. Oooookay. Then i’ll go, the wheels on the bus go round and round…. and then he’d interrupt and say “baby. baby.” So i’ll start again and go, the baby on the bus goes….

Sometimes he’d request to have turtles, pandas, papa and Champon on the bus. XD

For the past few weeks he has also been talking non stop!!!! Sometimes he’s especially chatty when he is extremely sleepy. Today he said “Yakult…. Yeahhhh. Rubbish….. JunJun….” and then fell asleep promptly lolol. Anyone care to decode his prophecy? XD

It was such a hard decision to make. I found the perfect school for him but here’s the dilemma: we would probably spend half our time in Singapore, but Junya’s school fees are by per semester, whether you attend every day or not. Meaning i’ll be paying full price for half the time he will be spending. Not to mention we probably need to find a new school for another half the time in Singapore!!! IN SGD!!!! T___T.

But i really think it is worth it. 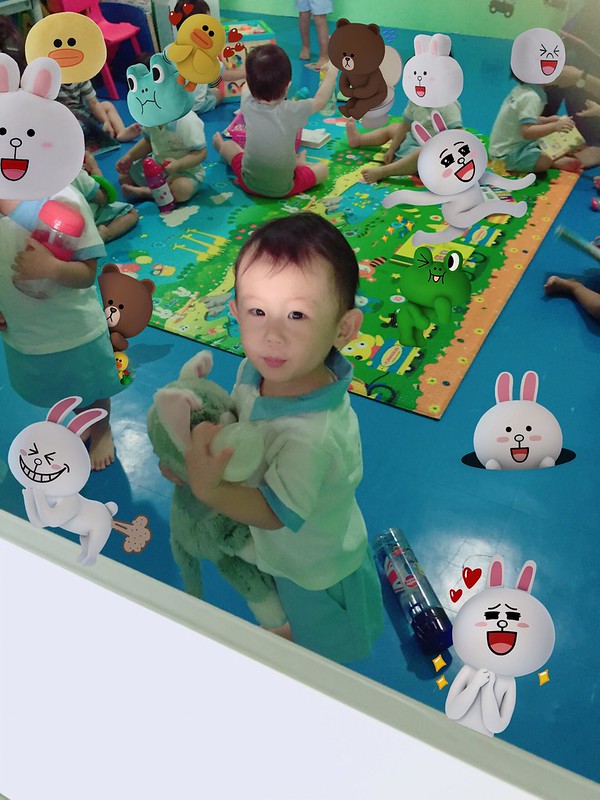 Junya is adjusting really well and i love the fact that he is learning something new with new people everyday, who are not his mom.

I also secretly love the fact that when i pick him up, he’d run to me extra lovingly and say “mama, hug, hug.”

Many many mothers have warned me about the agony of teething. I fully braced myself for it. When the first four front teeth came out, nothing whatsoever happened. So i just thought i had a very strong baby lol.

Actually they were coming out but they were totally being an asshole to take forever to sprout. And it was the worst thing. (Now all the mothers are laughing – Wait till the canines and second molars to come out!! Sigh.)

I wasn’t sure if it was entirely because of teething, (the doctor said it was most probably not teething related, so it could be a combination of unfortunate events) Junya had fever three. freaking. times. In a month.

And he hadn’t eaten anything other than his milk and some seaweed for two whole weeks. It was probably one of my worst times of being a mother. When your baby is weighing lesser and lesser and watching their chubby cheeks disappear. T__T.

He also had two whole weeks of super crazy diarrhoea, so much that he would wake up 3 times at night and whine “itai…. itai… itai….” (painful, painful, painful) and “poo poo… change… change….“. It was like he was 2 months old again. Except now he could verbalize it.

He also had UTI. T______T. Every time he peed he would cry in pain and demanded me to change his diaper (somehow he thought that it was the diaper that made him hurt and that after changing it would be much better). Japanese diapers probably had higher sales on that particular week lol.

But everything came to an abrupt change on 4th Jan 2016. I remember it clearly because Qiu Qiu and i was having dinner just downtstairs of Number76 SG before the party, and Junya ate the whole lunch box which was meant for ME, leaving me and Qiu Qiu pleasantly in shock.

Suddenly, Junya is eating like i have starved him for weeks. 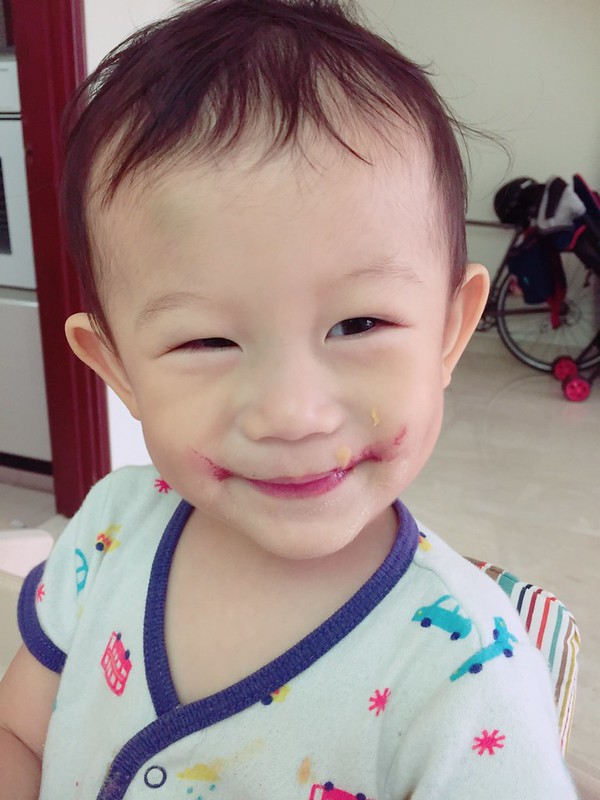 HE IS ENJOYING FOOD AGAIN.

The change was drastic. Like, literally overnight. Suddenly he is eating not just udon but porridge and rice and even bread. Like, BREAD. Just one day before he didn’t even want to touch that fluffy carb stuff like, at all!!! 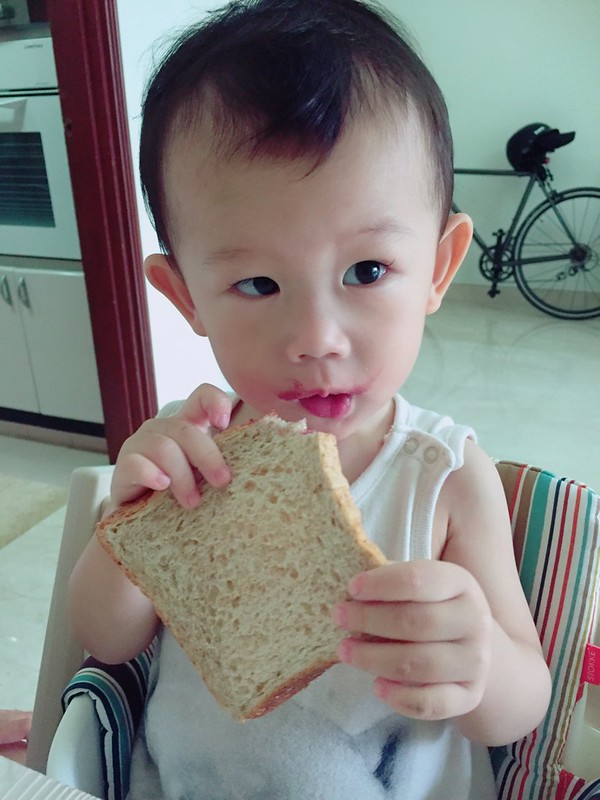 This was his dinner today: 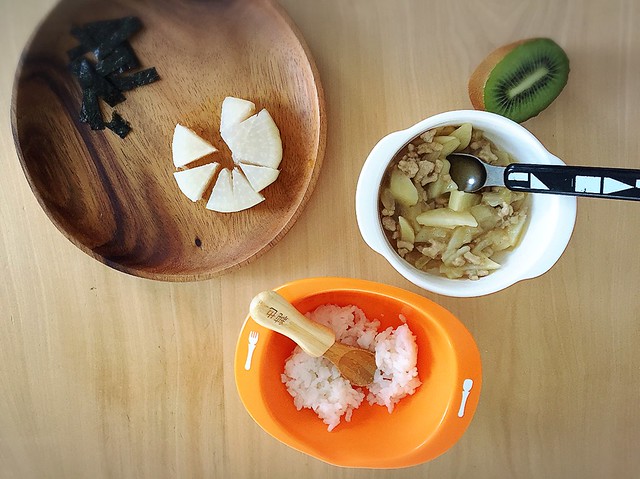 He finished all of it, and then he took a shower. After the shower he demanded, “hungry, hungry!” And then i gave him a piece of cheese bread. 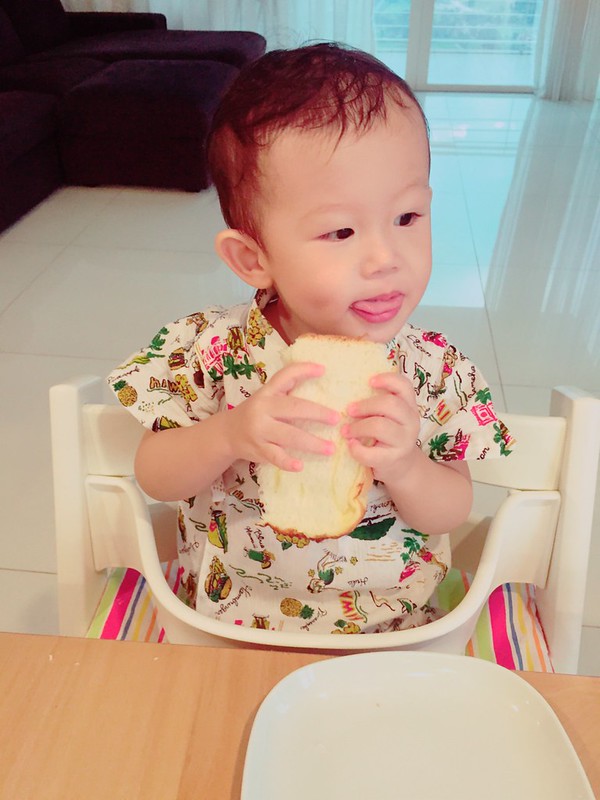 He finished a whole piece.

And then he had milk and slept.

From mama hell now i have just sat in a rocket straight up to mama heaven.

Also also!! He’s become very adventurous with food! When we eat out, he’d stare at the food he’s never seen before and say, “try, try.”

I dipped a chopstick in it and let him try. 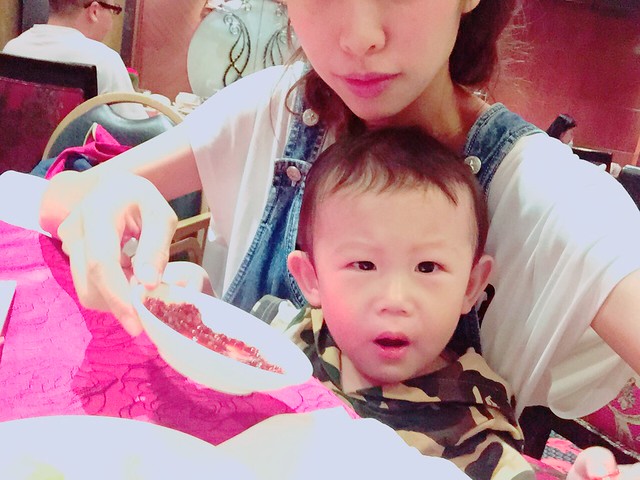 He gave a disgusted face, and then said, “more more“. We repeated this 5 times, and we only stopped because i didn’t want him to have spicy diarrhoea.

I refused to think about potty training and just went along with the thinking that “nobody goes to university in a diaper” lol.

BUT recently it has crossed my mind that maybe Junya is ready to be potty trained. No thanks and thanks to his UTI and diarrhoea, he becomes very particular about his diapers. Every time his diaper is full he’d demand it to be changed.

And every time he poo poo he would go quietly to one corner and hide until his business is over. He’d get angry if anyone goes near him lol. 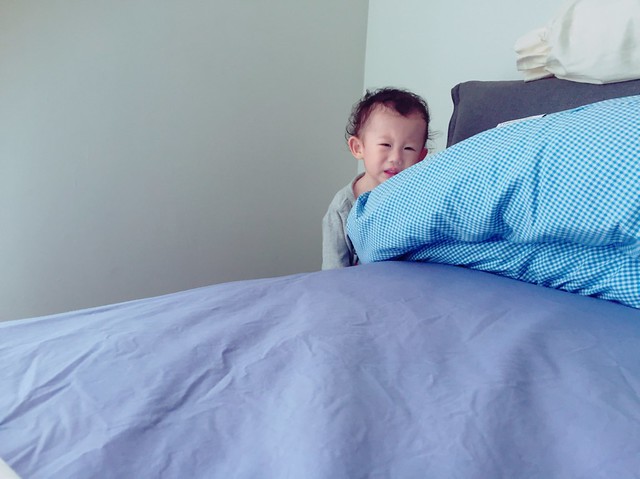 Sometimes if i don’t catch him at the corner, he’d come to me and tell me “poo poo” and i’ll change him.

Another new stamp on his passport!! 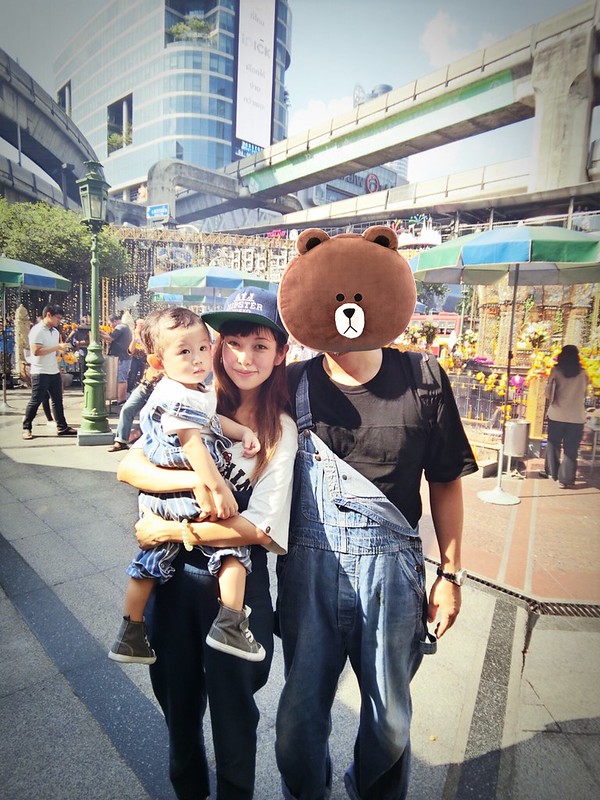 JunJun, you will travel around the world with us 🙂

Even if you don’t remember anything, you can still come to this blog 20 years later and see what kind of places we have gone together. 🙂

Speaking about traveling with Junya, i got this FB comment the other day when Junya was having high fever. 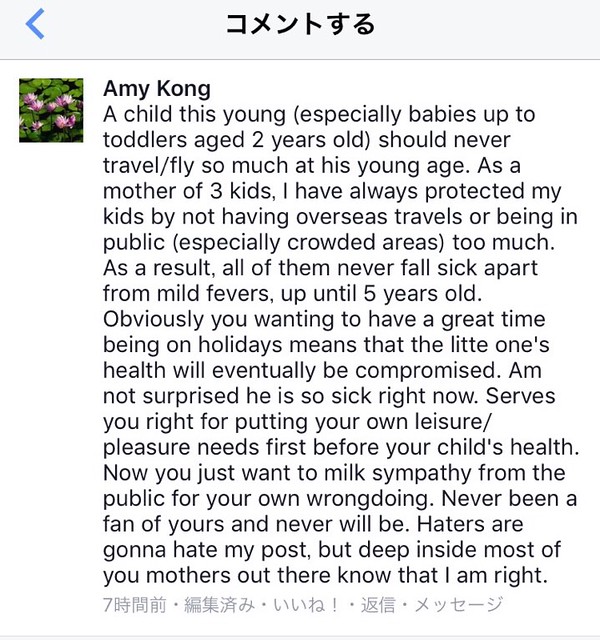 Never had i in my entire 19 months of motherhood thought that bringing my child to travel with me is an selfish act that is so, so erroneous. (Plus the fever had absolutely nothing to do with traveling. The last time we flew was in October 2015. The virus/bacteria overseas must have had a damn mighty and long life.)

To be honest, if given a choice, i would never want to travel without Junya unless it is for work. Even so i’d probably give up work. (Unless it is Japan lolol.) The danna and i just cannot be one of those parents who can enjoy romantic couple times together and leave our child with other caretakers while we sip on champagne and stare lovingly at the Pyramids. (At least not until he can properly cook his own instant noodle and call 999 lol.) And that would be our definition of selfish parents. We would be so miserably missing our child and be like, screw the Pyramids!!  We have come to terms with this before we decided to have a child. That from now on time most time we spend will be family time together.

I do, though, really really pity this mother’s children because, what kind of mother lock their children at home for FIVE years in fear of being exposed to health risks?! (Unless it’s a zombie apocalypse happening then i’ll totally do the same lolol.) How about school? How about some happy playground time? How about seeing the world?

Maybe we have really really different philosophy when it comes to parenting, i’m nobody to judge her, but for our family, traveling is one of the biggest joys in our lives, including for Junya. Even if that means he may potentially catch a bug and have a cold. But the precious memories we will have together would be priceless for life.

So yes i’m totally ready to renew Junya’s passport due to running out of pages for new stamps lolol. 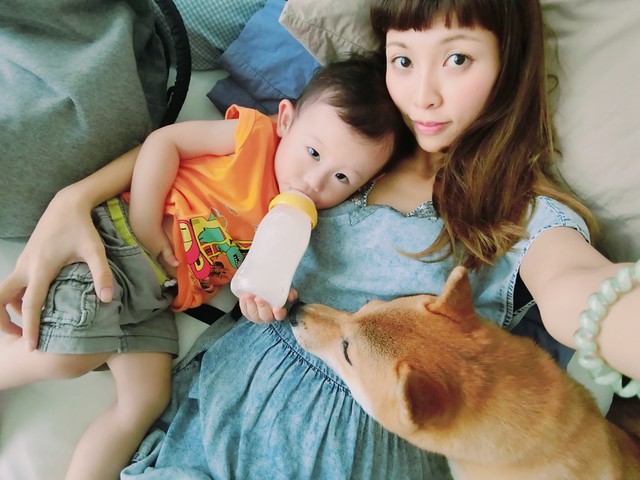 Tomorrow i am leaving to Osaka for work. And the end of the month another work trip to Tokyo. Not allowed to bring Junya so i guess that makes me a more responsible mom for that reader lolol.

But nevermind! In February we are going back to Japan again, ALL FOUR OF US! 😀

As for tomorrow, I wish i could bring both but i could only bring one of my children, which is the one that’s still inside of me lolol.

Already seeing the world from before she is even born. ^^