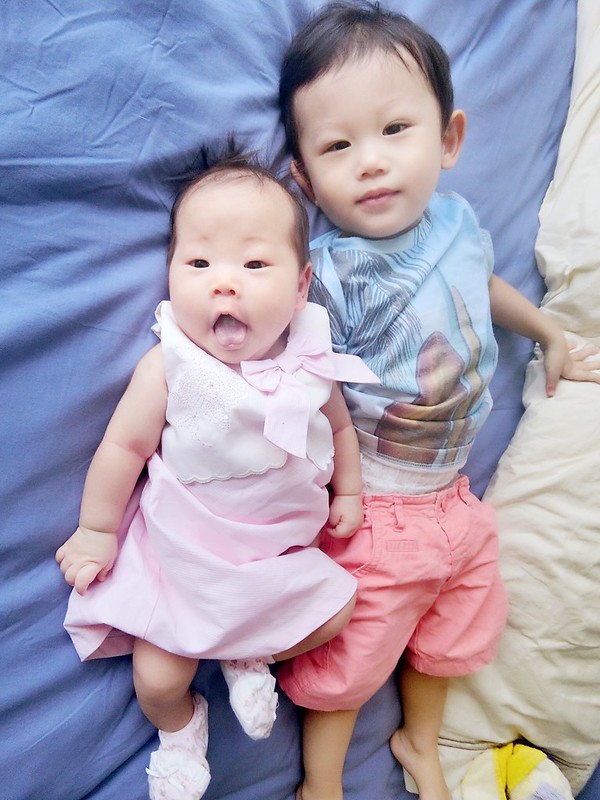 Who Spilled My Blueberries?

This happened in Singapore. Sometimes when I get busy with housework, Junya has all the freedom to explore the house, and one of his favorite things to do is to inspect the items in the fridge and in cabinets and drawers.

When I finally finished the chores, I saw Junya playing at the couch so I called out to him from the kitchen.

He immediately ran over, and pushed me back to the kitchen, saying “Mama… cannot. Mama cannot.”

Puzzled, I was wondering what he meant. And then I saw a flash of panic in his eyes. He ran back to the couch, I followed him and then saw half a box of blueberries spilled all over the couch, and Junya with both is hands placed at his bum, looking at me worried (that’s his classic look now when he accidentally breaks something, or locks my iPhone due to multiple wrong password entries -_-).

And then immediately I understood that he was frightened that I would scold him for making a mistake. My heart ached.

Since when my son has learnt to fear for punishment? I have never ever punished him in any way before (other than telling him off sternly, force-snatching stuff from his hand during urgent times, and pretend cry and painful and sad when he hurt me lol), and I never believed in punishment in terms of behavioural improvement.

I sat down and then told him with a smile, “it’s okay, let’s put those blueberries back into the box together!!” 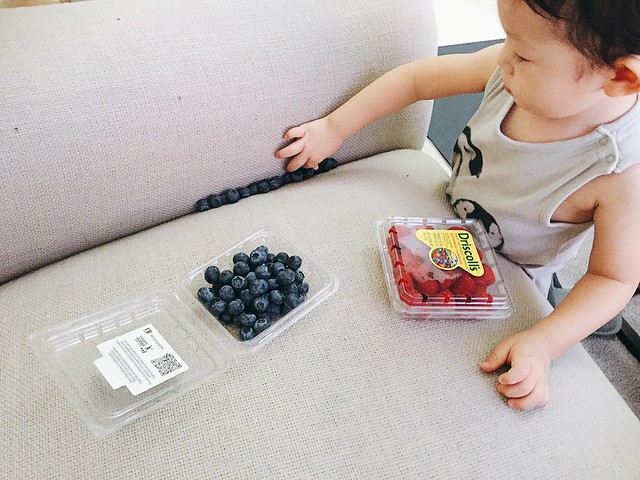 And we did, happily.

Recently the danna feels the same way. He told me sometimes he sees a flash of fear in Junya’s eyes, and he was wondering if he has been too strict with him. He felt a little sad that the fearless innocence is gone, and Junya is going to have to face a complicated adult world from now on.

I just want to remind myself again and again to not lose my temper, to never ever shout in the house or raise my voice, and to try my best to solve each and every incident calmly and positively. Because I think if I were him, that would make me feel the happiest.

I can wear my pants! 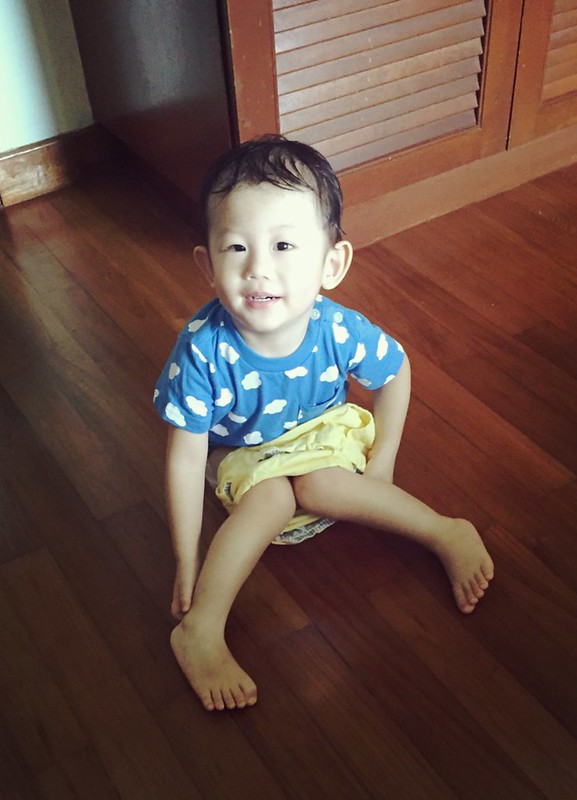 He can even wear it criss-cross lol.

I can reach everything! 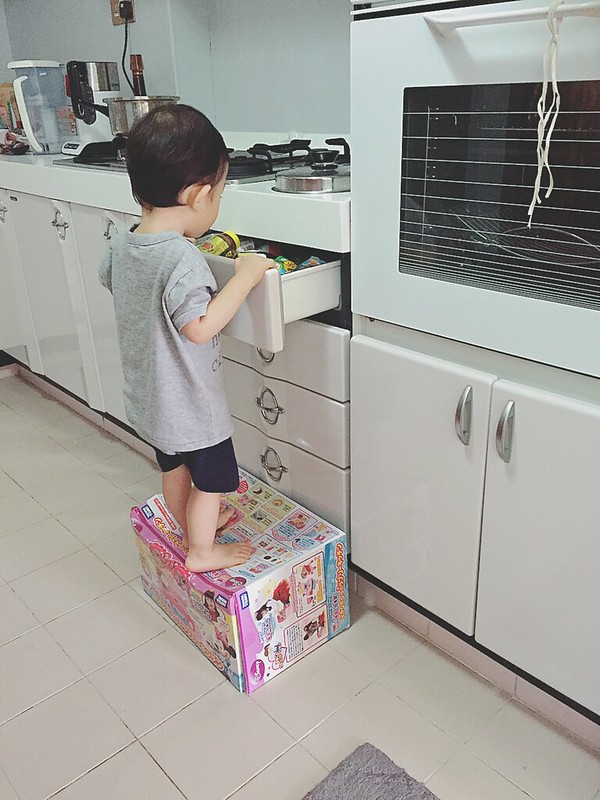 Seriously. I. did. not. teach. him. this. One day he just decided that the task of the hour is to inspect the top kitchen drawer, so he fetched an empty toy box and did this.

I mean. I am impressed, at least.

I can be mama’s helper! 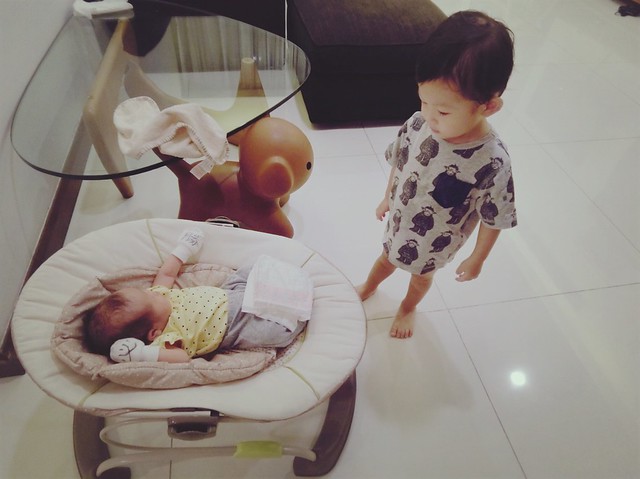 He likes to fetch Sakura her diaper. 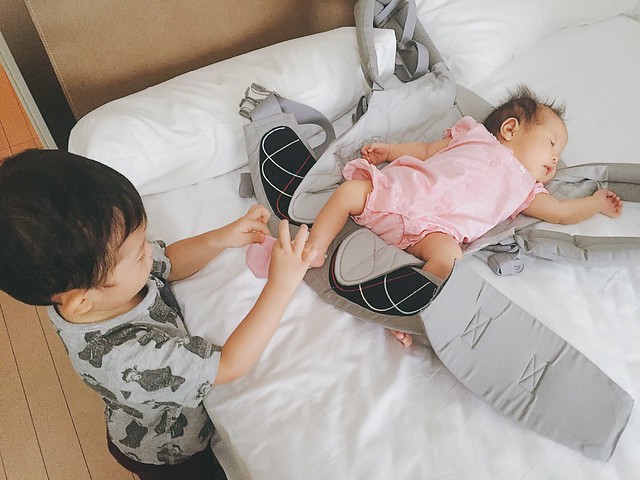 He insists to wear her sox for her. 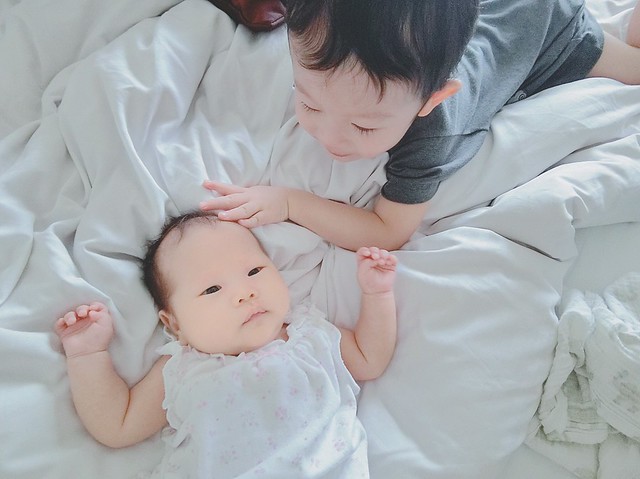 The first month he was really jealous and tried to ignore her existence. But his little sister has been living together 24/7 for two months now, he has come to adore her, sometimes staring at her, smiling, and tells me, “Baby Sakura kawaii.”

BUTTTTT when I am in the midst of playing with him and Sakura cries out loud, he immediately will hug me so tight like a koala and said, “mama hug JunJun. mama cannot hug bae Sakura. Papa hug.”

I am terrfied of crawling babies 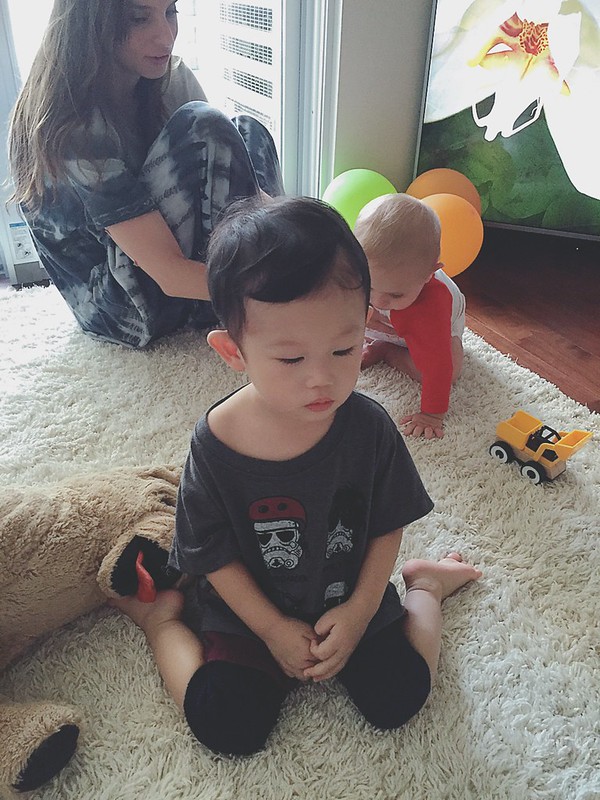 Junya is terrified of babies who can move a lot. (Babies of Sakura’s age are fine cuz they are too harmless.) Especially those who have started crawling and would come at him like little zombies (but in a very very cute way), squealing and trying to pull his ear/hair/shirt. Every time he sees a baby that age in the near vicinity he just freezes. Usually they come at him from the back and once they touch him he just starts wailing lol. Junya! Why you so weak lol.

I don’t know how to help him get over this baby trauma @.@

He can now sing a whole song and he has quite a few favorite. Usually he changes the lyrics to suit himself lol.

And “The bus on aunty choo choo go….” and Qiu was like, cannot!!! that means I’m dead now LOLOL. Junya really no like her until 咒她被巴士run over LOLOL.

Once he also made an accidental pun. My friend Carolyn tapaoed some soba salad over for dinner and she commented that it was very gross. Junya goes like, “Yuckysoba!” and we burst out laughing.

Other things he says: 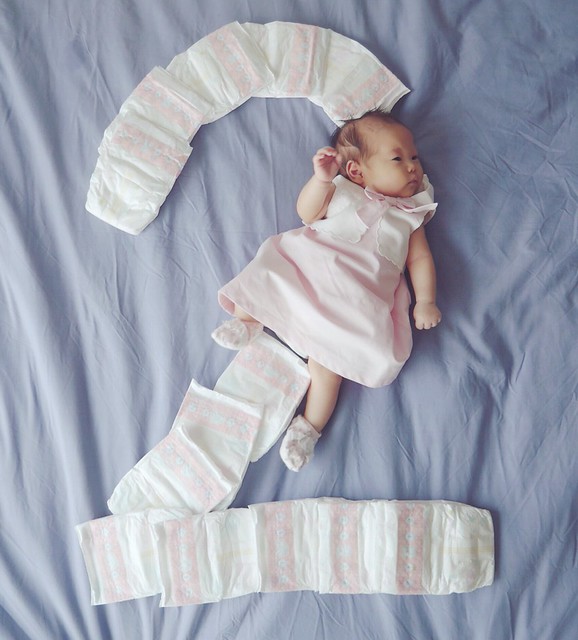 Usually there are only 5 things she cries about:

The last one is… no fix wan. Just have to carry her while she cr-hick-cry–hickhick—cryyyy-hick it over. She really really really hates hiccups.

What else happened?! Honestly I don’t really know. She sleeps all the time and I guess she is just busy growing more cheeks? 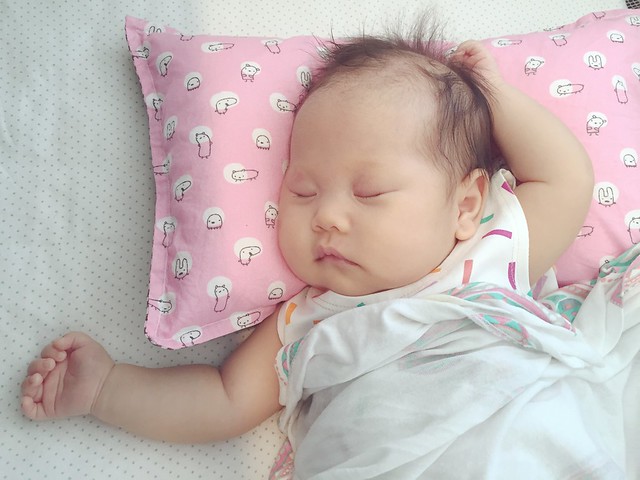 Qiu once asked me to show her latest picture of Sakura and I was like… I haven’t taken picture of her for many days and she gave me a very shocked LINE stamp and asked, IS THIS WHAT SECOND CHILD IS ABOUT?! 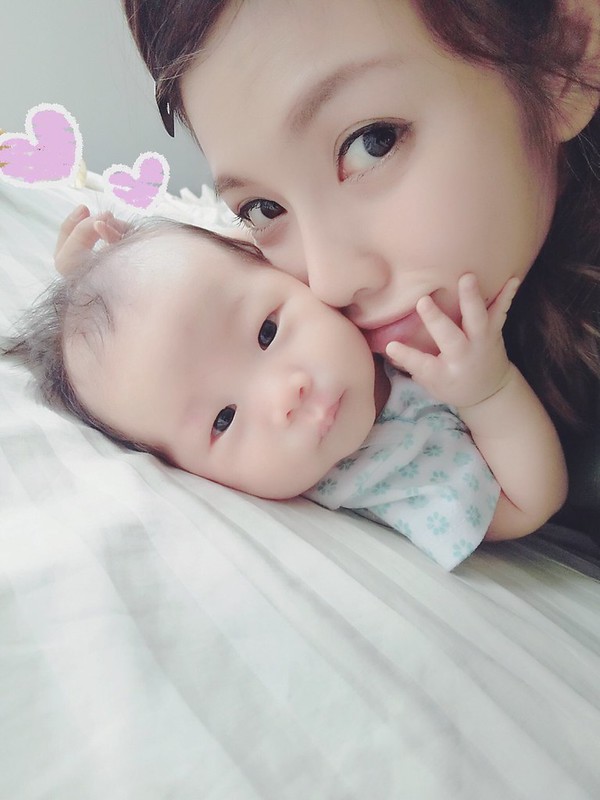 I am in a little disbelief myself that one month for Sakura just passed by so uneventfully, compared to Junya. Then I told her that it’s probably because I shit also no time. Literally lolol.

Anyway, Sakura is still a great great great sleeper at night (for now). Yesterday I fed her at 23:00 and we both went to sleep. The next feed was at 05:30. Is that considered…. sleeping through the night?! @.@ 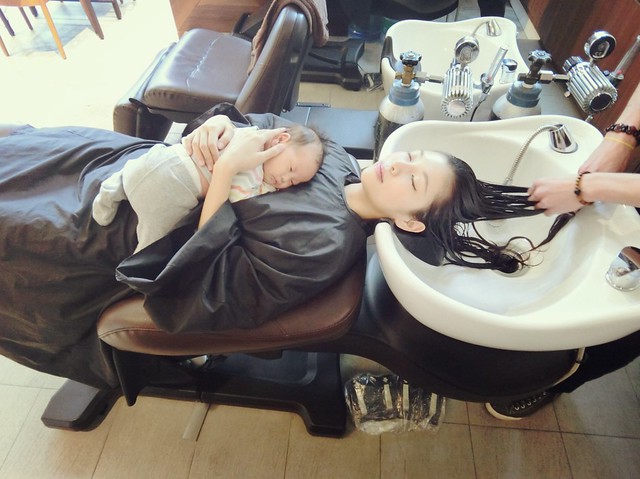 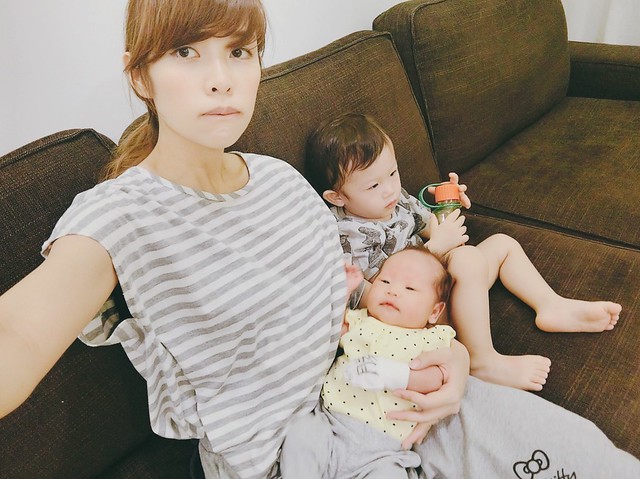 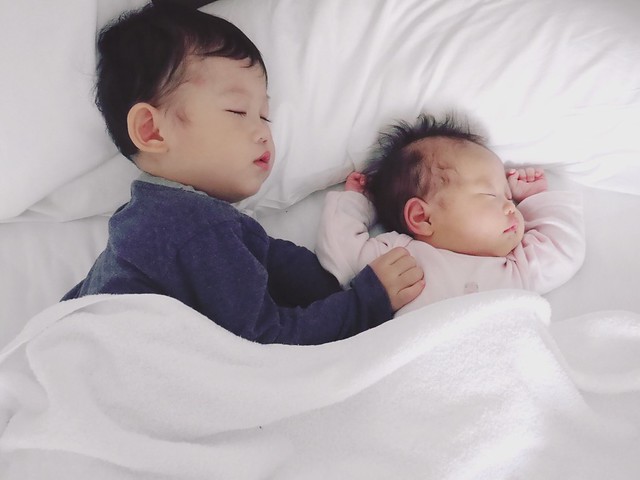 Papa’s birthday today!! Last year he still got a birthday bento from his lazy wife. This year he gets… gets to help me change diapers lolol.