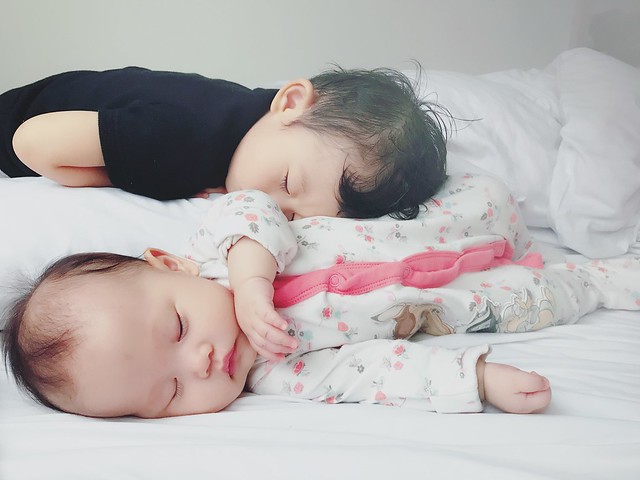 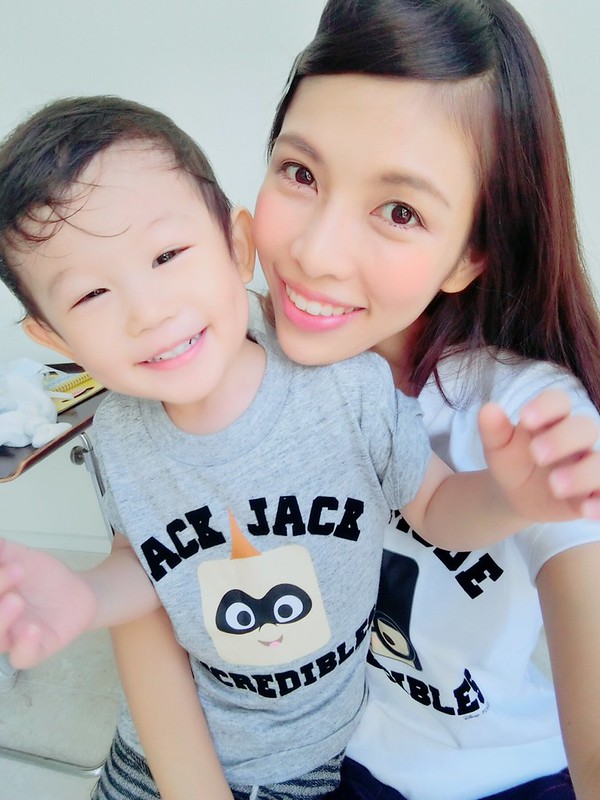 I totally forgot about this. I thought it was all over until I noticed that he started to eat his fingers like a baby -_-.

Then I found a fully sprouted molar while brushing his teeth. 3 more to go!

(I have no idea how to translate it in English. In Cantonese it is 肉緊 haha. Basically it is a strong urge you feel that makes you wanna grind your teeth and clench your fist. Or when you see a fatty baby cheek which you can’t bite lol.)

Junya is geram ALLLLLLL THE TIME. He even knows it. When he is geram he says “grummmm!” XD. This is how he looks when he feels geram. 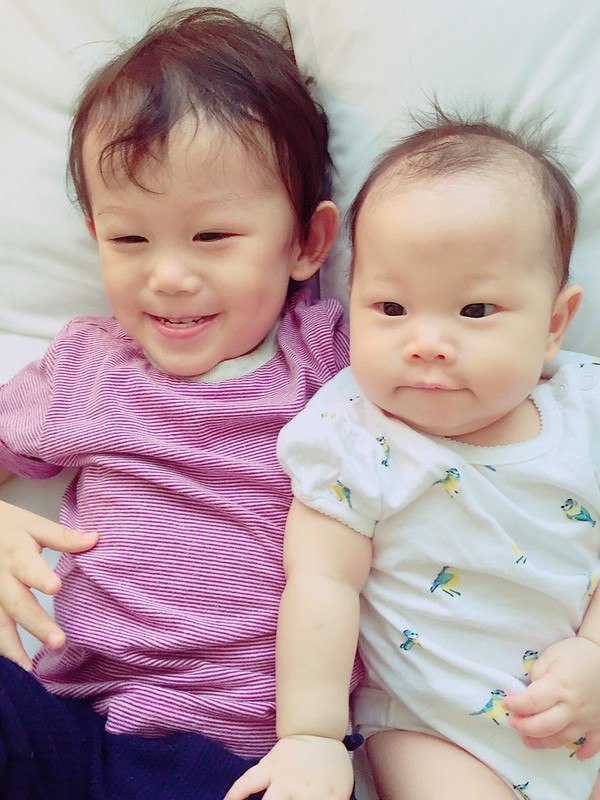 One more of his geram face while going beserk: 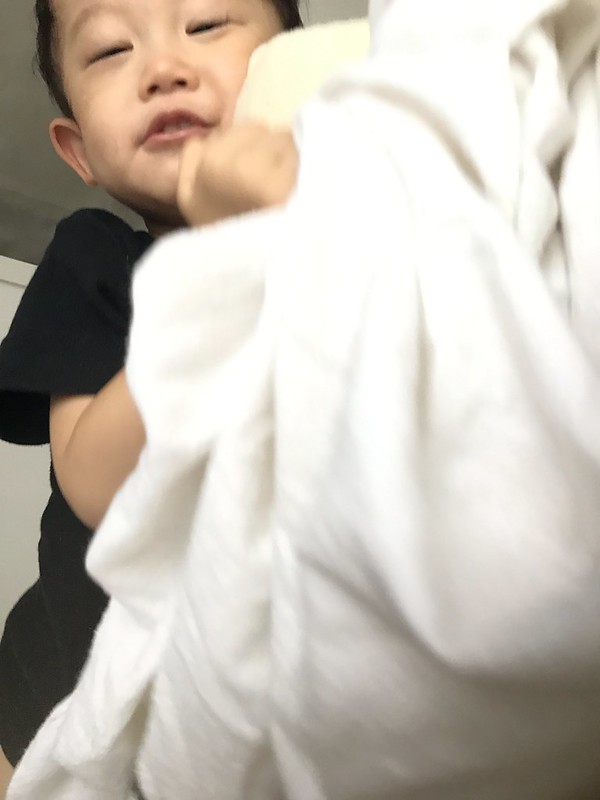 Luckily he strangled the pillow instead of other humans.

I’m not sure if it is related to his teething, but he has so much pent up energy to release it makes him a bit like a cute fluffy puppy gone rabid. Thinks Stitch on full destroy mode.

But when he is not geram, especially when relaxed and sleepy, he would lie on the bed, grab my arm and say, “koko, koko (here, here.)” and pull my arm around him and turn over (so I am hugging him from the back). I wonder how long this manja-ness will last T___T. 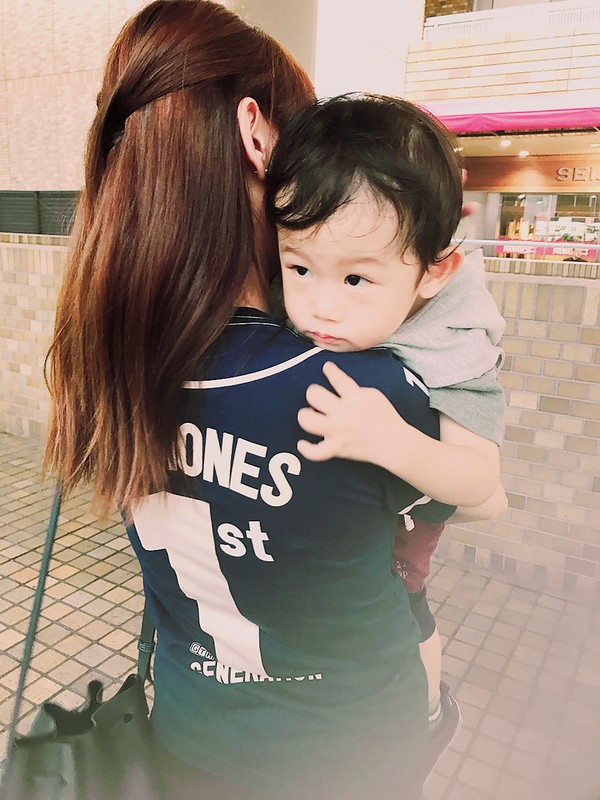 He has been having fun learning how to do the peace-sign. But one day he simply got frustrated (when he is tired and sleepy whatever he does seem to be all against him lol) and cried “I CANNOT. I CANNOT DO IT.” 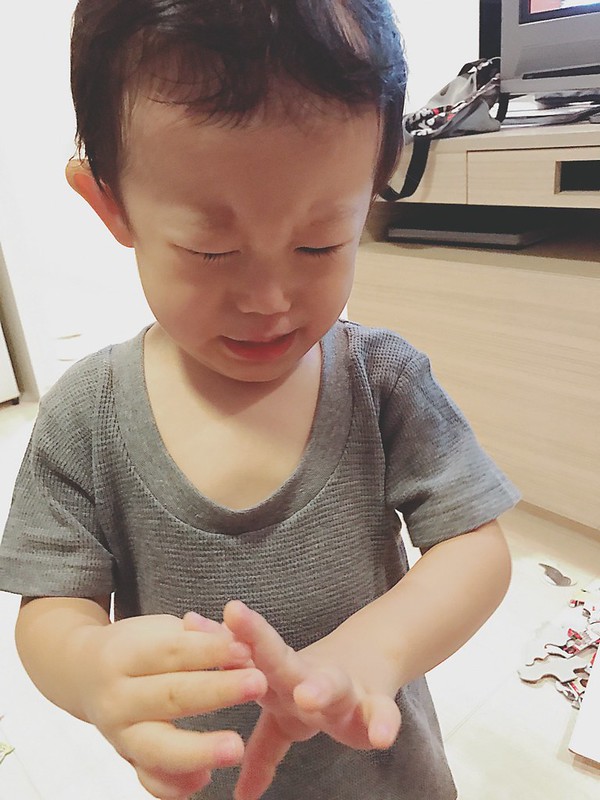 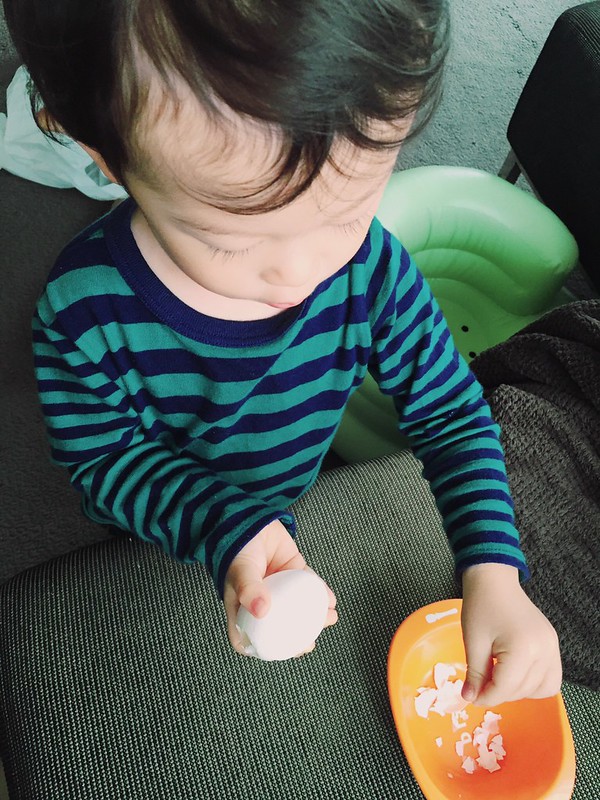 Every day he requests to go to the combini to buy eggs so he can peel them all. 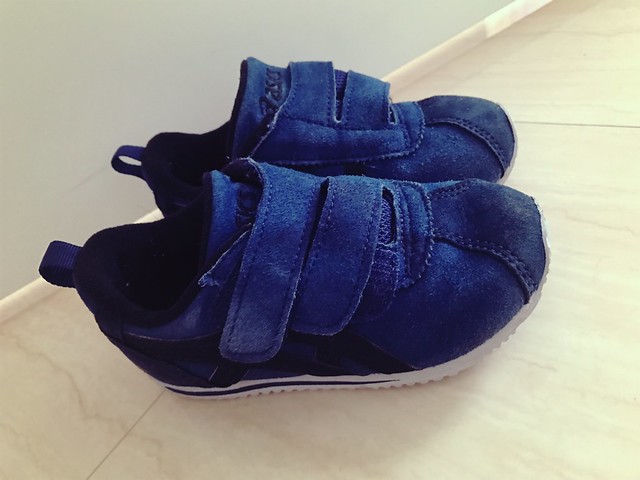 We got him a pair of new Asics and he now can wear it all by himself like a pro. Save us all so much time for an outing!

I have made a deal with the danna. Previous at home we were both speaking mixed languages and it confuses Junya to the max. He said stuff like “I want to taberu kore” (I want to eat this).

But now we promised each other to speak only one language each (him Japanese and me English, although sometimes we still couldn’t help but mix up a little). And the improvement was beyond impressive.

Junya no longer speak mixed language anymore. He now understand Japanese and English are different languages and he can speak both in full sentences. Although sometimes he still say

The daily 15 minutes of Shimajiro and Nontan (Japanese educational anime for young kids) on Youtube during teeth-brushing time also helped tremendously in expanding his vocabs. Every day he says new things that amazes me! Few days ago he asked “Anata da-re?” (Who are you?) and “Nani kashira?!” (what was that?), which are phrases we have never used in the house before.

I Want To Catch Some Pokemon

He says that when bored.

Admittedly guilty, I have been playing too much to the point that he recognizes most of the Pokemon by the sounds they make.

He is totally a better trainer than I am. 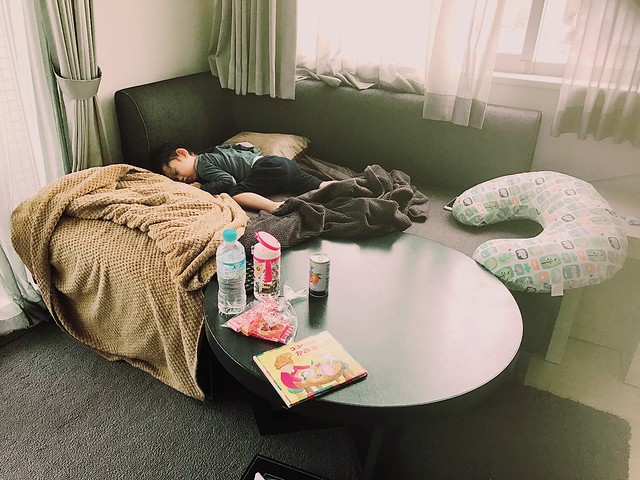 For the first time he sleeps alone in a different room away from papa and mama.

Our apartment, again has a small bed that can fit max 2 adults and one infant (even so I still feel like a Chinese zombie). So we had to move Junya out to the living room sofa. He is okay with it.

I think it’s time he gets his own bedroom. Decorated with Tomica and lots of JAL mini airplane models. ^^

So, one day I was nursing Sakura to sleep in the bedroom after some crying (Sakura, not me lol). Just when she was about to drift away to dreamland, Junya darted into the room and shouted, BURIM, BURIM, BURIM!!!!

And then Sakura woke up crying again -____-. I got frustrated and sort of whisper-yelled (got such thing? Haha but you get what I mean! To tell someone off sternly in a small voice because you don’t want to embarrass yourself in public or wake the baby up) at him and dragged him out of the bedroom, which might have been a little too harsh and anger-driven on hindsight T__T.

He got a shock and sobbed. And then I lectured him again (don’t be so loud, Sakura is sleeping) and he said sorry, and then he pointed at the window in the living room and said, “Mama mite, (mama look), BURIM.”

I was like huh. I turned around and looked over at what he was pointing at. 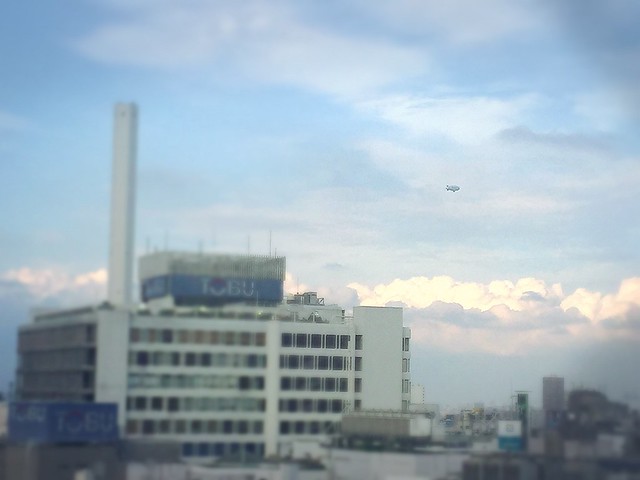 It was a blimp (apparently?). Good god I didn’t even know this thing exists, but I vaguely remember seeing it in one of his air vehicle books and read it out to him.

My son was trying to show me a new vehicle he discovered in all excitement. What did I do? I got angry at him.

I did it again. No matter how many times I reminded myself, sometimes negative emotions still got the better of me.

I hugged him and apologized. And then we watched the blimp disappear into faint white clouds together. Today I learnt (again) about listening to my child without exploding first. And also a new air transport. And that my son knows better than me.

(Interestingly, he thinks that there are two blimps. One from the bedroom window and another one in the living room window lol.)

Other things he says

“Don’t waste the pokeballs.”
“I want hand sanitizer before you eat.” (he is still trying to grasp the concept of “you” and “me” lol)

Last month I talked about how he learnt to control his emotions and calms himself down during a tantrum. So few days ago he was crying about whatever and I was telling him, “stop crying, I don’t understand anything you say if you cry.”

His cries then turned into smallish sobs. I said again, “stop first, Junya.”

On another day before bed time: 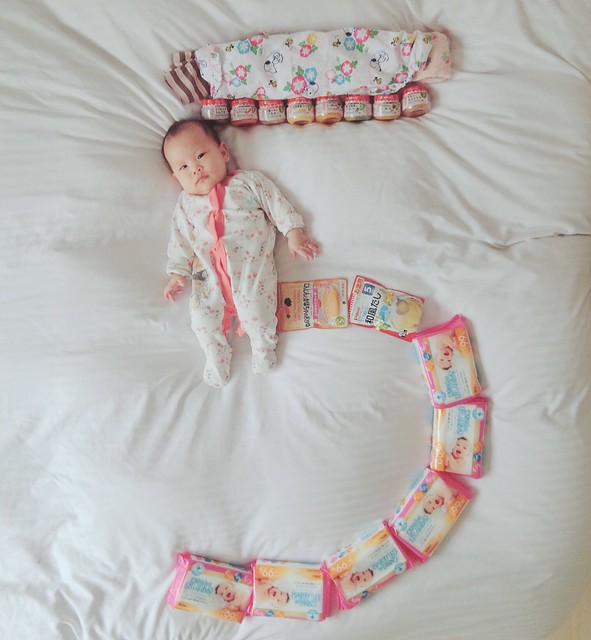 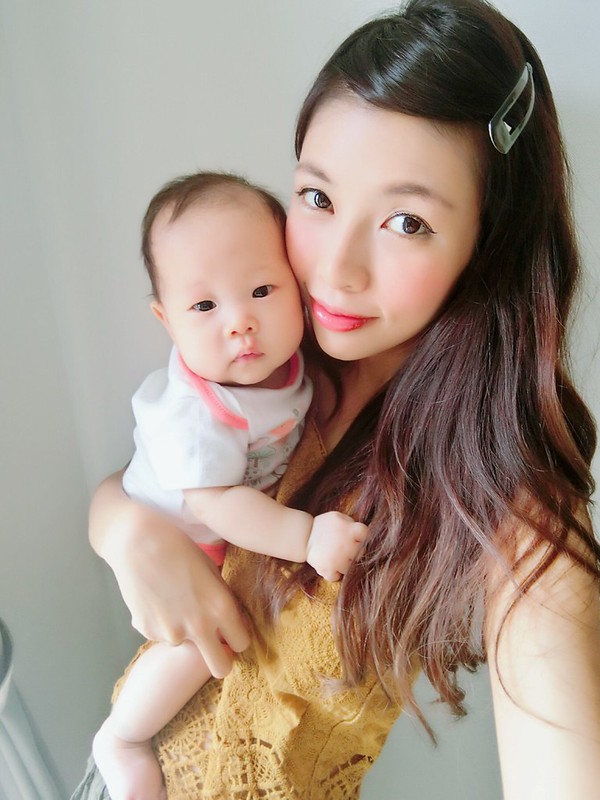 Ok so it happens again. The teething baby starts biting. When she feeds. (Sometimes she bites down and pulls away like a German Shepherd tearing a steak apart omg) Urggghh.

Up till last month, she was still too quiet. Now she is shouting. XD 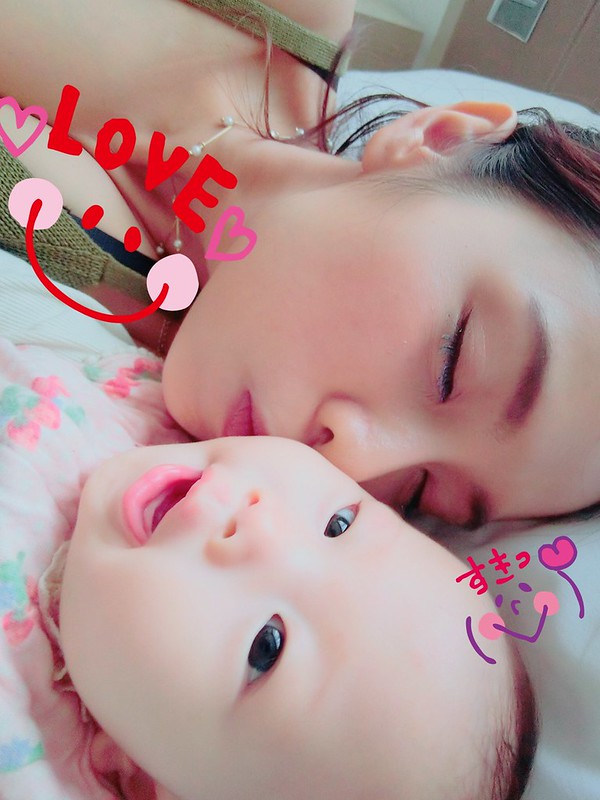 I now can hold a decent conversation with her.  It goes: 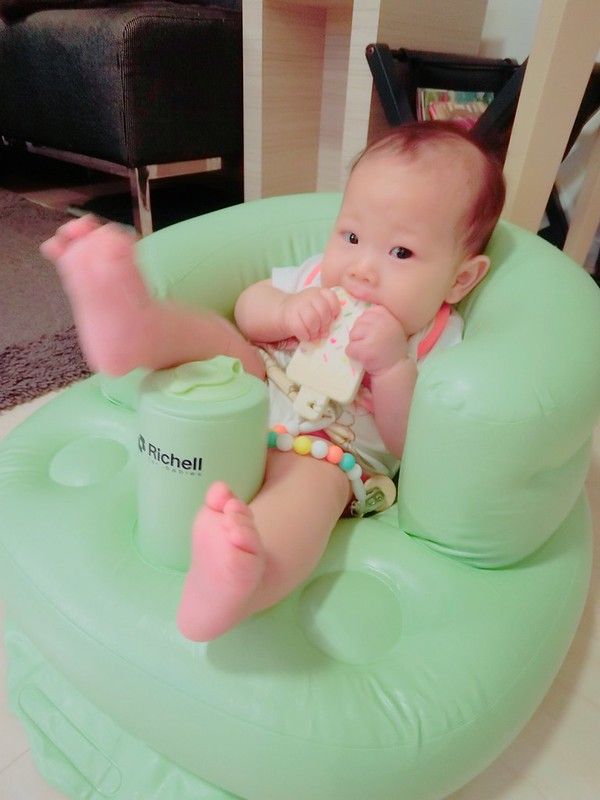 I can eat Ice Cream now.

Mirror Mirror On The Wall

I just read Junya’s 5-month blog post, and I realized it was this time he reacts to the baby in the mirror! 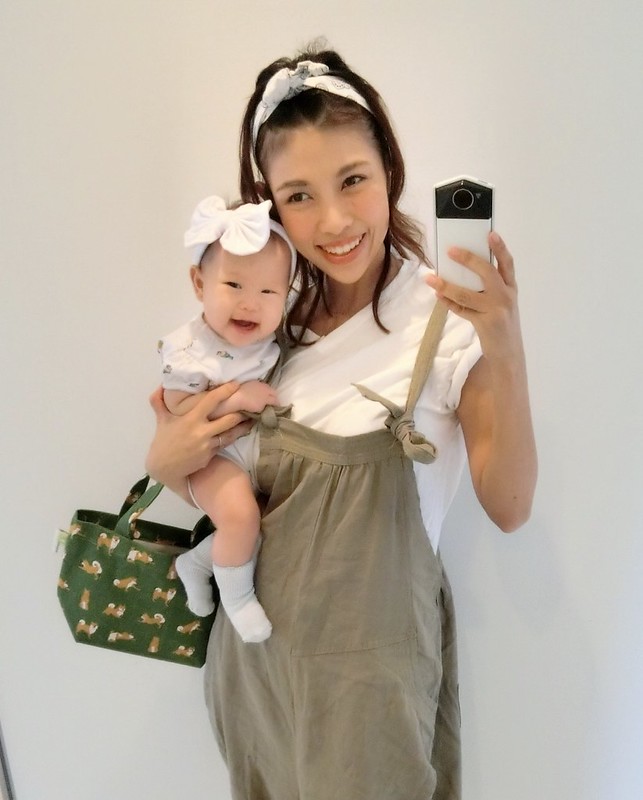 She also smiles a lot now. No full on laughter yet though, it’s quite hard to make her giggle, only by very spot-on tickles or bouncing her near the mirror making weird noises lol.

Usually she is the one who wakes up earliest. She just stays in bed quietly. And when I wake and kiss her good morning she gives big, big smiles, and then both of us go back to sleep again haha. 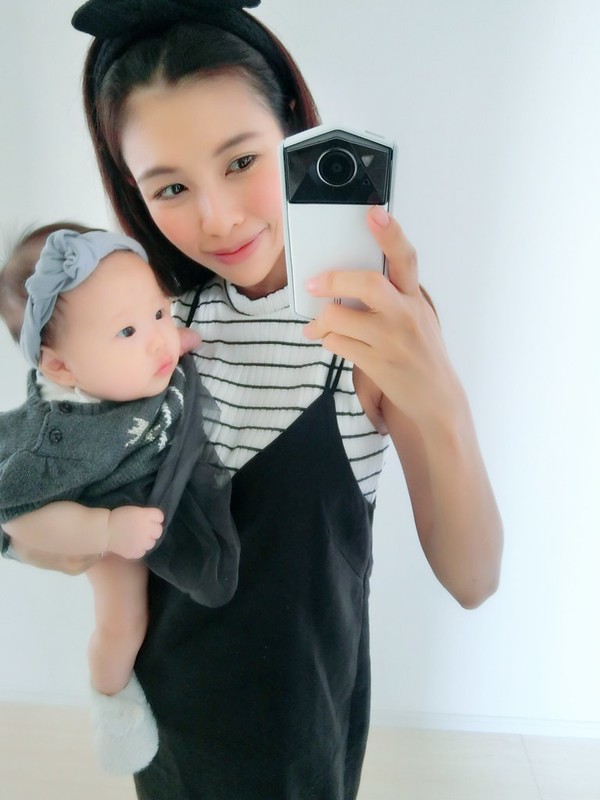 Sometimes I wonder how long more I have to do this 24/7 having a baby stuck to me thing. Nobody else in this world can settle her when she cries, and nobody else can have the same boobs as me haha. (And she didn’t want the bottle the last time I tried.)

But in many ways I am also very glad that I am her sole caretaker. The bad part is that I have to decline most jobs that require me to be away from her even just for an hour. (The last time I went downstairs to combini to buy myself some dinner, and just when I was out the elevator the danna texted me to come back cuz she was crying.)

But the good part is that I know her so 100% well that I am even confident to bring her to travel alone. The danna said “why don’t you travel around Japan with Sakura” since I have been rejecting so many tourism jobs. #ChallengeAccepted yolol. (Yeap that’s YOLO + LOL.) Time to level up again ma. #pokeMom