Junya turns 43 months today and Sakura is 20 months old! (I can’t believe she hit double digit that starts with “2”! It makes her feel closer to 2 years old than 1.5!😱) 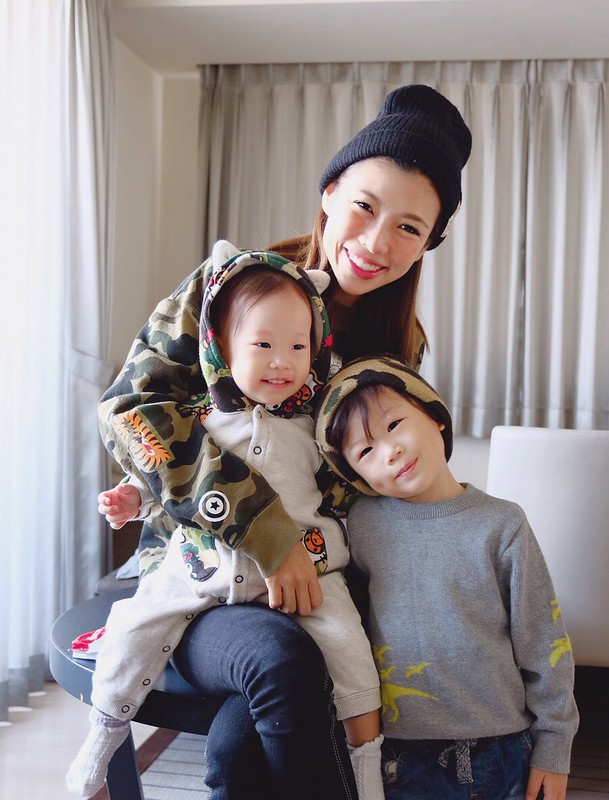 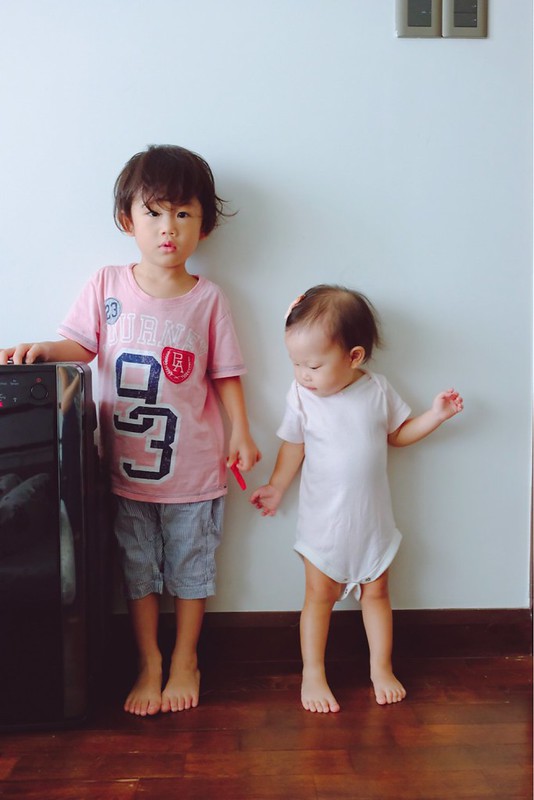 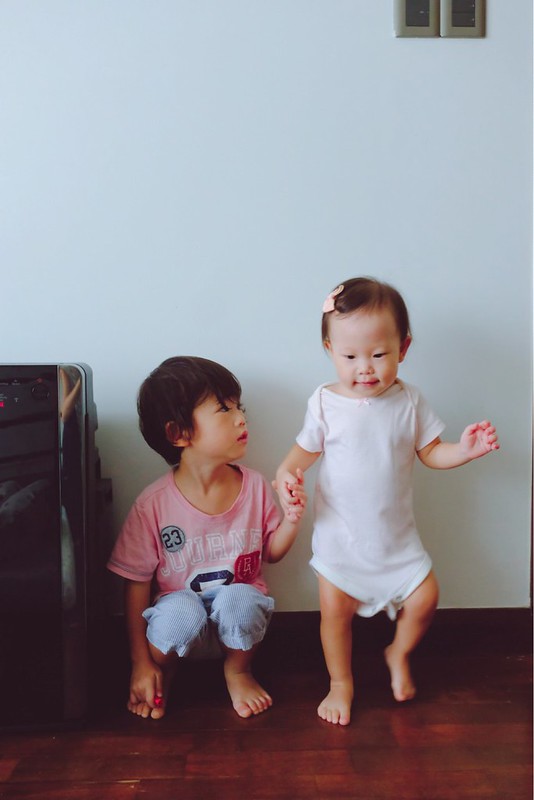 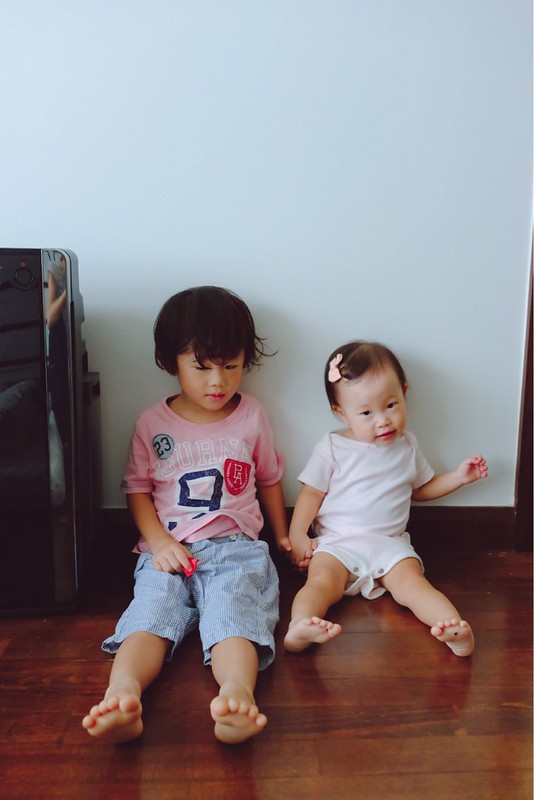 We spent almost a whole month away from Singapore (back to KL then Tokyo), cheesiepetits also skipped school for the entire month.

Here’s the update for the past month! 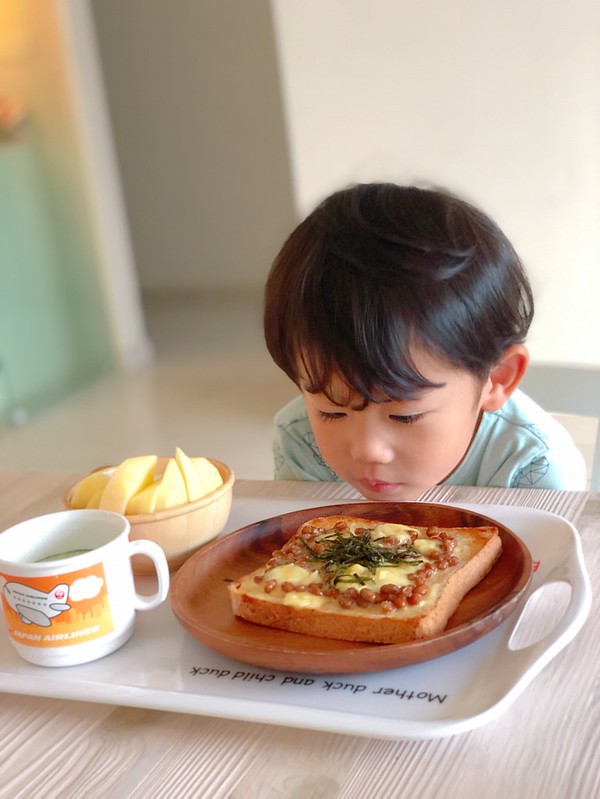 Sitting through the flight

When they were babies, your first challenge was to get them to sleep through the night. And then after that you want them to sit (or sleep, or whatever, just be quiet!!) through the flight. 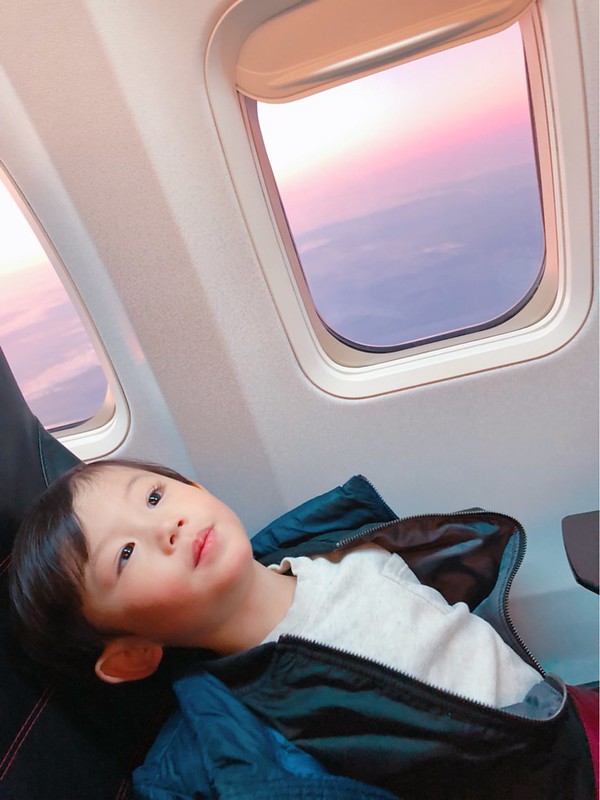 For the past few trips to Japan, he was super well-behaved throughout the 7-hour flight. He either slept, or quiet watched movies until we landed.

On the other hand it was Sakura’s turn to constantly wanted to move around, stand up and go down the seat. T_T

Honestly, one of my biggest worries for the kids is that their sociability. I have always find it difficult to mingle with new people because I am so socially awkward (hard to believe but I am really very jialat when it comes to socializing). The danna worse. He doesn’t have friends lolol.

We both constantly feel that our personalities also play a big part in influencing Junya and Sakura’s social skill. We are just not that kind of parents who could throw huge parties and gatherings every weekend.

The other day when I picked Junya up from school, a little girl from his class came over and hugged him (hey hey hey!! Got ask his mama’s permission first ma😠??) (just kidding. Pls hug him more haha). 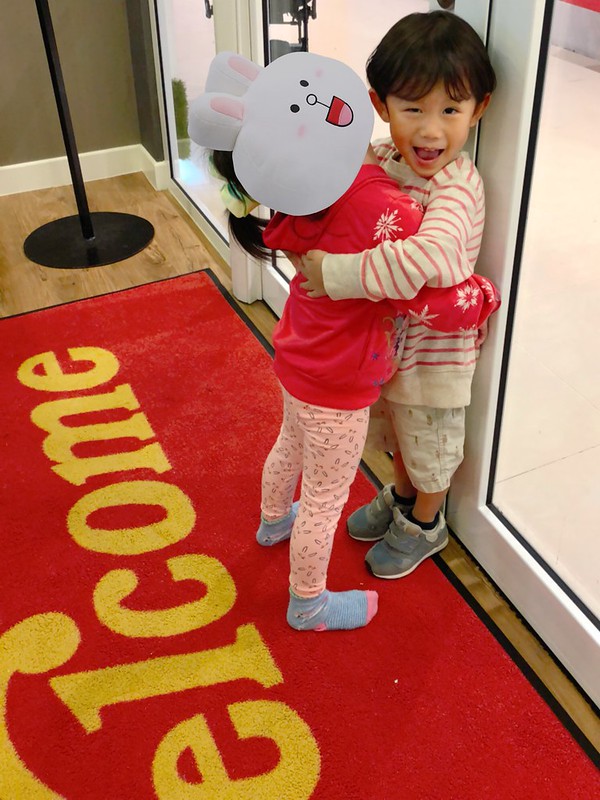 And Junya looked happy. I was so happy knowing that he is liked by his friend(s). (At least this girl haha.) 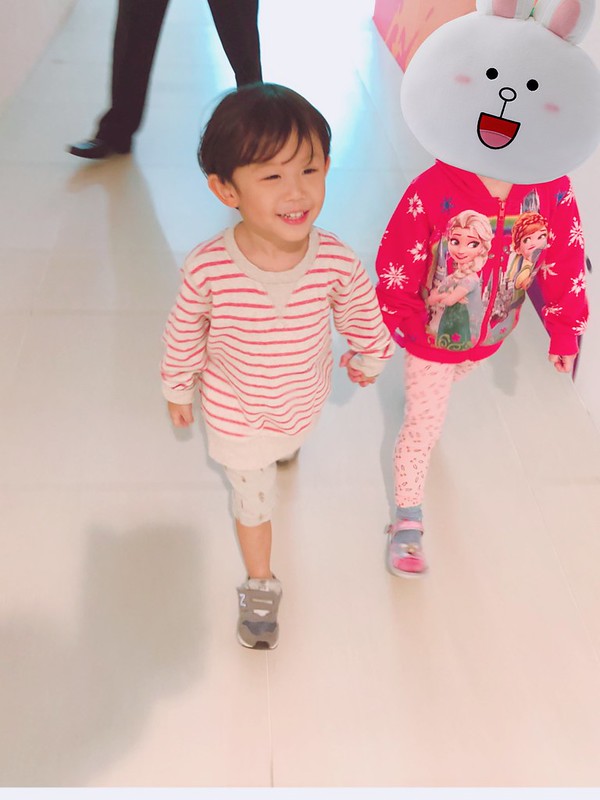 And then the girl asked him “Junya can you hold my hand?”, he did and they walked together until it was time to part and go back home.

Another reason that made me worried if he actually has any friends was that he never voluntarily tells me anything about school or his classmates. Ever.

Even when I try to kepoh some juice out of him, still cannot. When I asked him who is his favorite friend or teacher, he would just give me some super general and diplomatic answers like “everyone. I like everyone”. Even if I know he may not like a certain kid in class because I observed the kid to be naturally quite aggressive, he still says “yes he/she is nice.”

The only thing he could tell me are factual things like “today I ate rice and melon”. And that’s only when I asked.

There was no way to squeeze any news or juice out of his tight lips. I wonder if it is a boy thing because all the little girls I know would kepoh to her mommies every. single. thing. that happened in class.

I feel really awkward sometimes because his classmates knows all about him, his sister’s name, etc. But I know nothing about his friends because he just won’t spill anything.😳

One day, he came back from school and asked me, “mama, did Wu Laoshi tell you anything?”

and then I freaked out.

Oh no. Something happened??? 他闯什么祸了??? But no the teachers didn’t tell me anything. I quickly checked with the teacher and she told me nothing happened, she just chatted with him about his trip to Japan, etc. Phew.

Then I asked him back, what did you and teacher talk about? He said, “just something”.

1.Junya discovered a present that someone gave to Sakura.

2. Junya brought a box of snack to show me, looking strangely excited.

And then I realized what happened. He accidentally wetted himself on the floor, and tried to pull a diversionary tactic. -_-

3. Three of us in the bathtub, Junya playing with his bath toys.

Junya: Mama, the soap pretend to be tofu.

The good, and the bad

Sibling rivalry is of course inevitable. All the mommies told me that their kids fight all the time. I get an increasing need to sort “arguments” out, usually the situation involves Sakura wanting whatever oniichan is eating/playing and he doesn’t wanna give it to her. 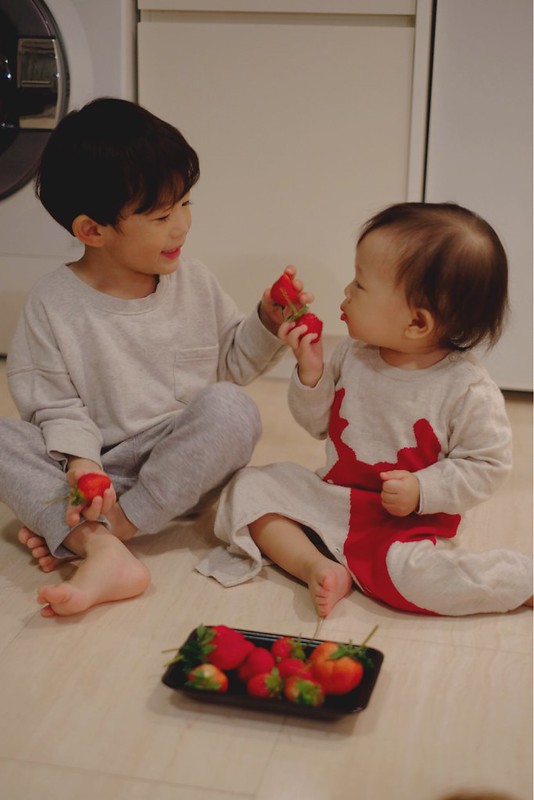 But, actually sometimes the rivalry gets things done faster too.

Or even better, he is also eating stuff he hates (negi) just because his sister is eating it. And vice versa. Honestly sibling rivalry is not so bad at all lol. 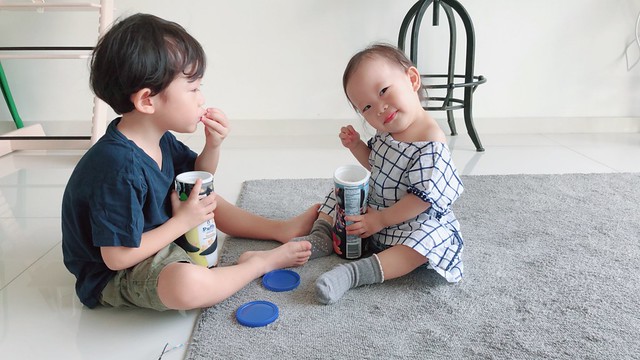 More and more Junya has learn to be generous in sharing, but on the condition that Sakura must say “please” (piiiiii) and “thank you” (teh du). 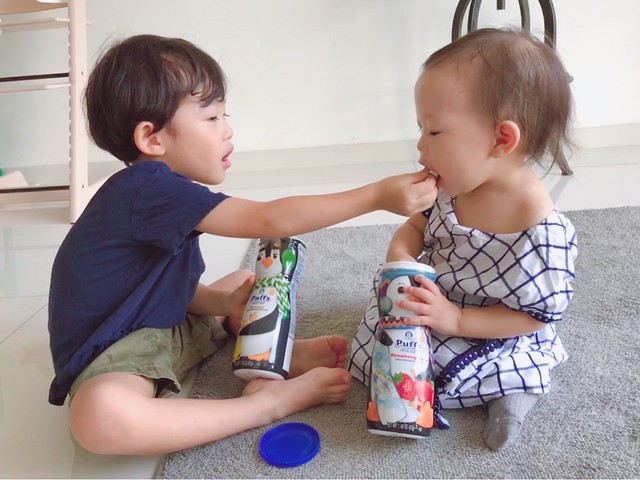 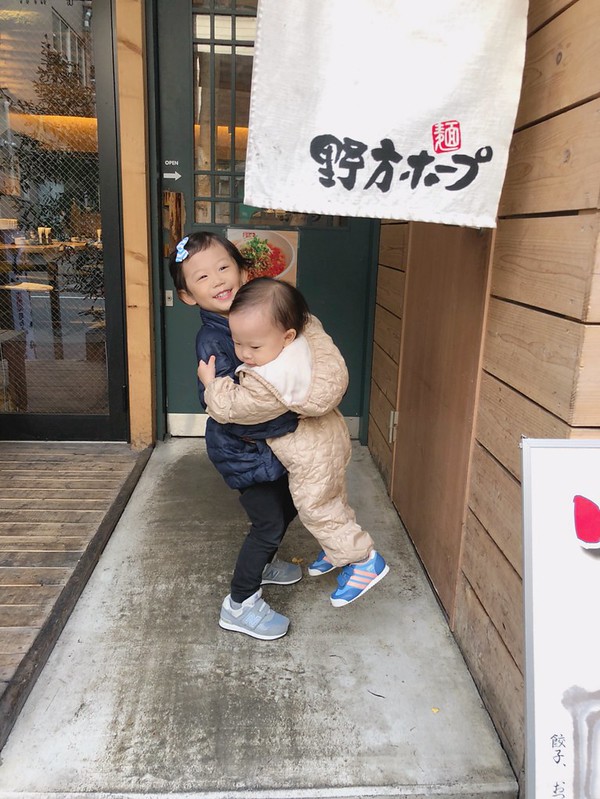 On good days, it is really heartwarming to see them nakayoshi (good buddies/get a long well). 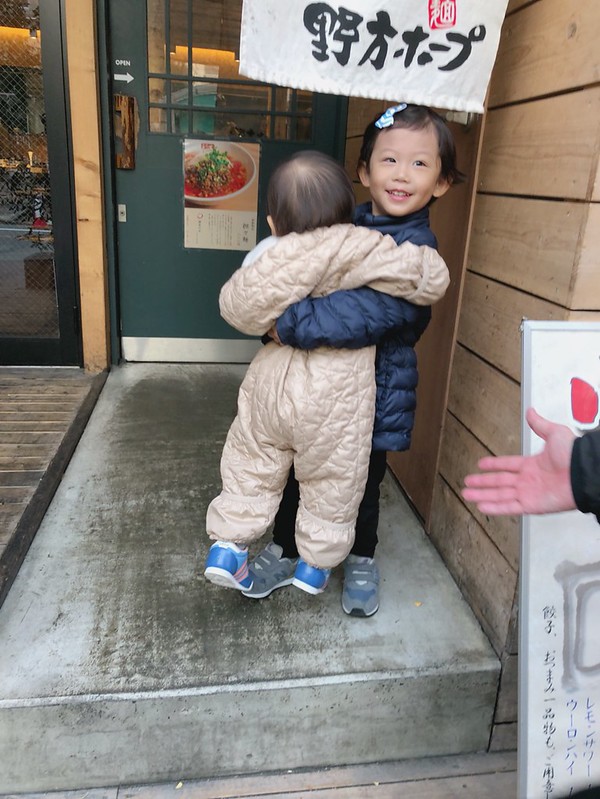 Trying to carry Sakura down the stairs because she could do so yet. 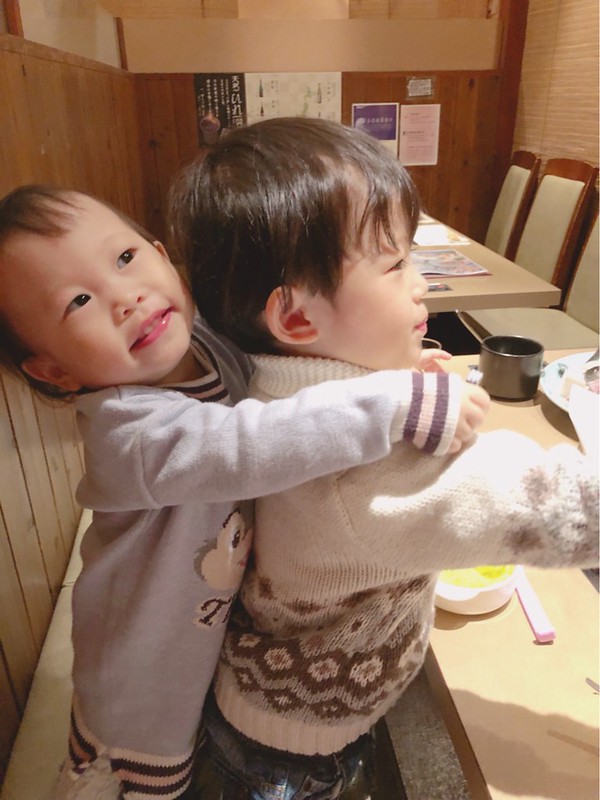 But sometimes too much. 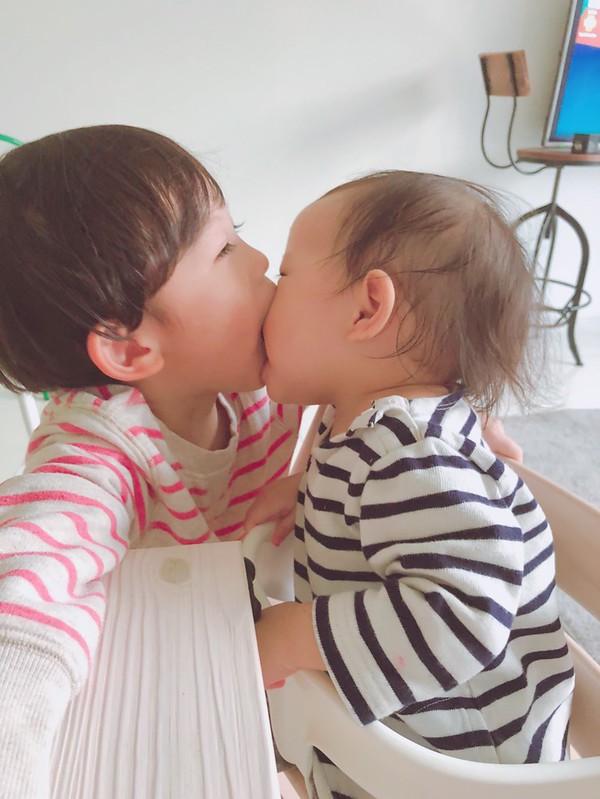 Excuse me what you guys doing?! 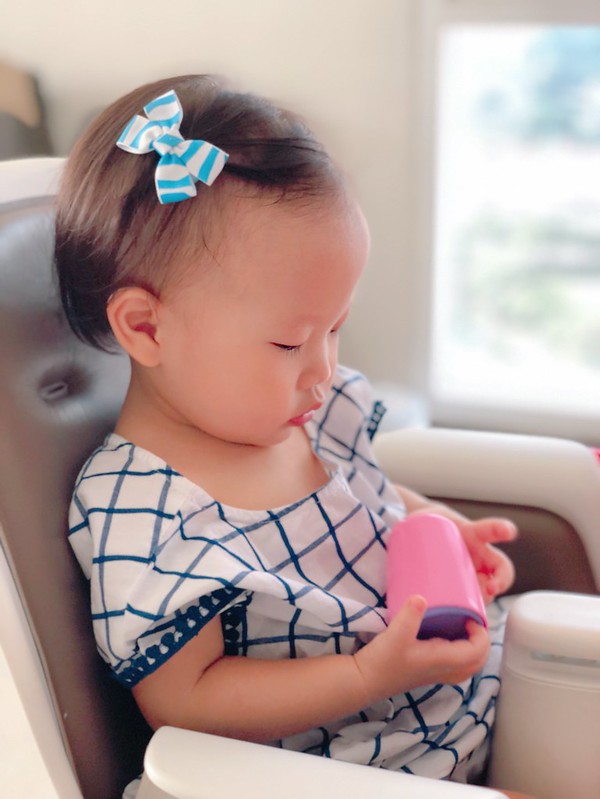 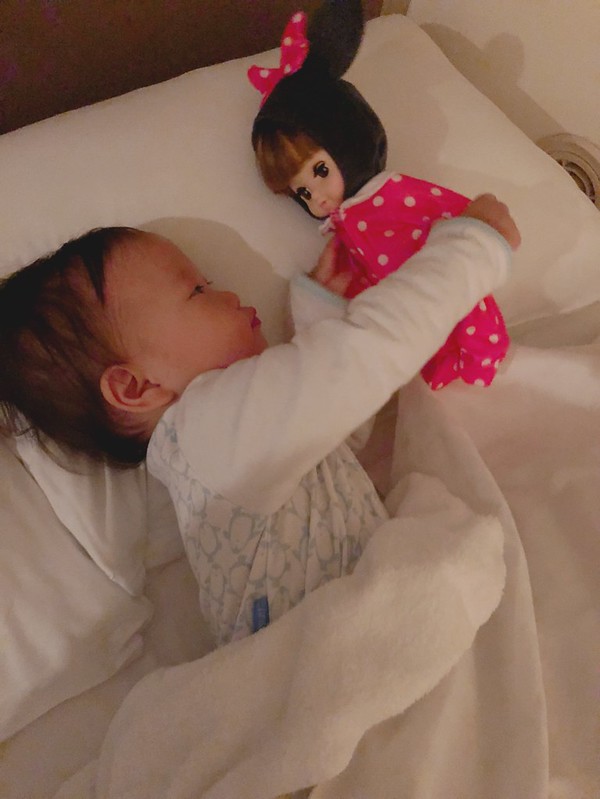 I bought her a “baby” in Japan because I had always dreamt of owning a massive sets of doll collections when I was little. So now I see her play haha.

She loves her baby, but not so much until want to carry everywhere she goes. During dinner she will have to feed the baby first. She also asked me to give my oppai to baby -_-. 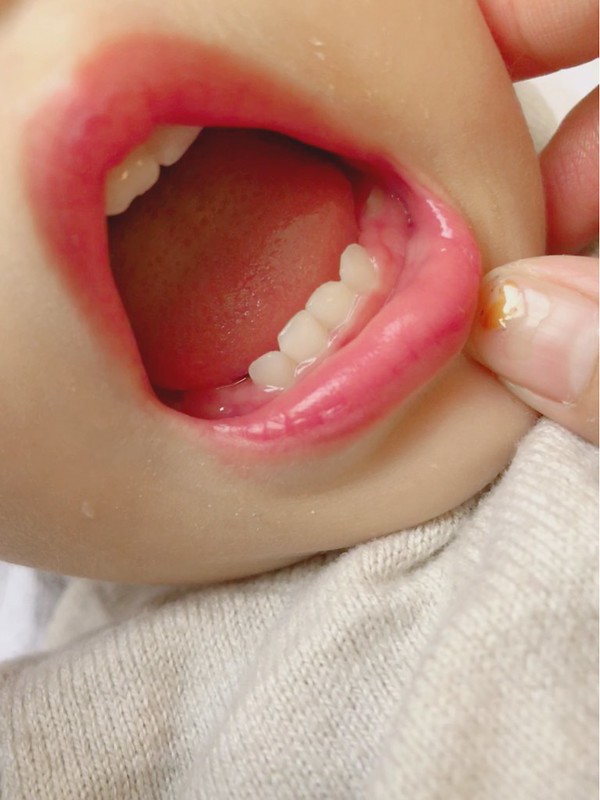 These b****es finally erupted. This photo was taken 3 weeks ago, now they are fully emerged. 8 more to go 😒.

When we were in Japan somehow she started saying this phrase “Behbi Ayuuu” (baby Ayu?!), I didn’t know what it was but that was really the cutest thing she’s said lol. So now me, Junya and Sakura keep saying Baby Ayu to each other now.

She really really doesn’t like heat. Just like me. When she’s all sweaty she’ll tell me “hoh, hoh, hoh”. (Hot)

While Junya is able to withstand the hottest sauna-like weather (whereas lips turns purple just after 10 mins of swimming in the pool), Sakura is the complete opposite. We had quite a tough time during the winter trip because obviously we are all wrapped up warm and fuzzy, but the moment we enter the car, shopping mall, train, etc, Sakura would get super irritated and start to scratch herself violently and struggle to pull at her jacket, fleece top, shoes, socks, (she wanted to take off everything!!!!!😱) because it is too warm for her T___T. So I constantly had to blow cold air at her to help her sleep and caress her face, neck, hair to keep her cool. T_T

I think some of you have probably seen my IG stories on this. The first time it happened was at Yufuin Floral Village, Oita.

I think she wanted something (which I didn’t do for her), and then she just plopped herself on the tarmac, looking down, frozen. 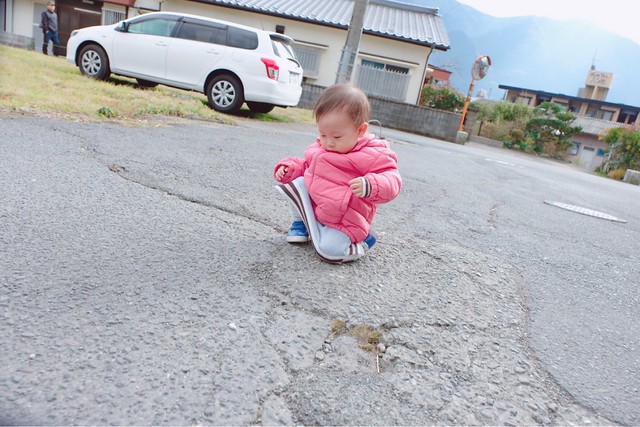 The danna had a shock because he thought she fell down or something.

I ran to her and tried to helped her out, but coldly, she uttered “noh.” And then turned her cheeks away.

Excuse me what just happened?! 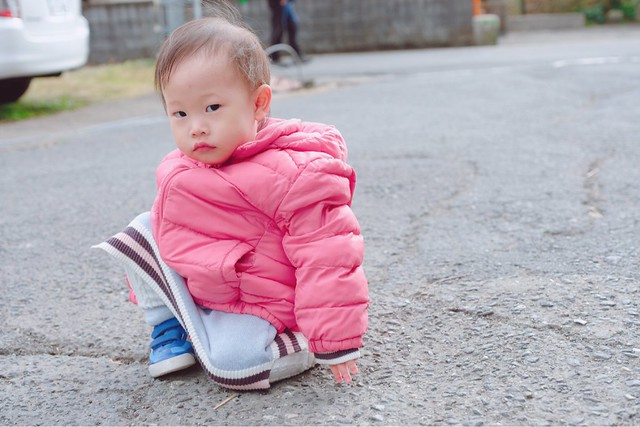 She refused to budge and gave me a sulky face for one whole minute.

So that was the first time.

I don’t know how or where or from who she picked this up. But I was quite shocked lol. Many followers on my IG kept saying she damn cute to do this.

Ok it is cute for like the first 3 or 4 times but not when she does it  EVERY 10 MINUTES.

Omg she really very very 小气 until she will do this immediately when:

1.Oniichan doesn’t give her whatever she wants
2.We buy something and she wants to open immediately but I say later
3.She wants to eat more of something but I say finish
4.I carry her and she wants to go down but we’re in a rush
5. She is walking and want me to carry but my hands are full
6. Without any obvious reason

which is… pretty much ALL THE TIME. 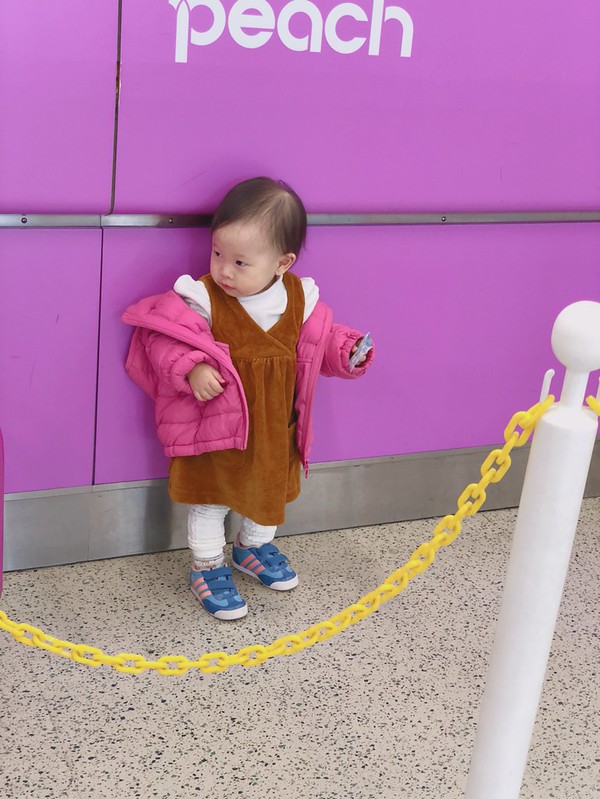 At Nagasaki airport she walked around a little too far, I called her to come back and obviously she needed more time to explore things on her own so she just turned away. 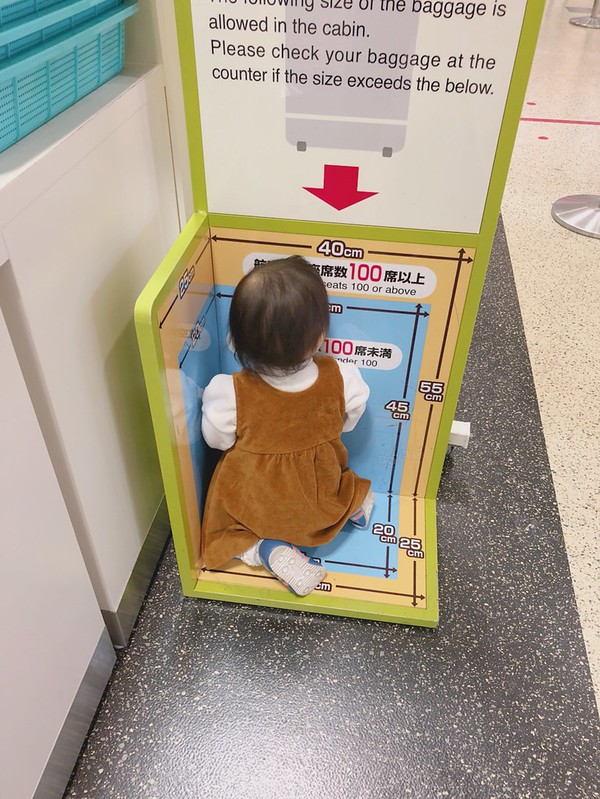 At the airport scanner checkpoints, I rushed her to pass through but she kneeled down on the cabin luggage measuring thing facing the wall. 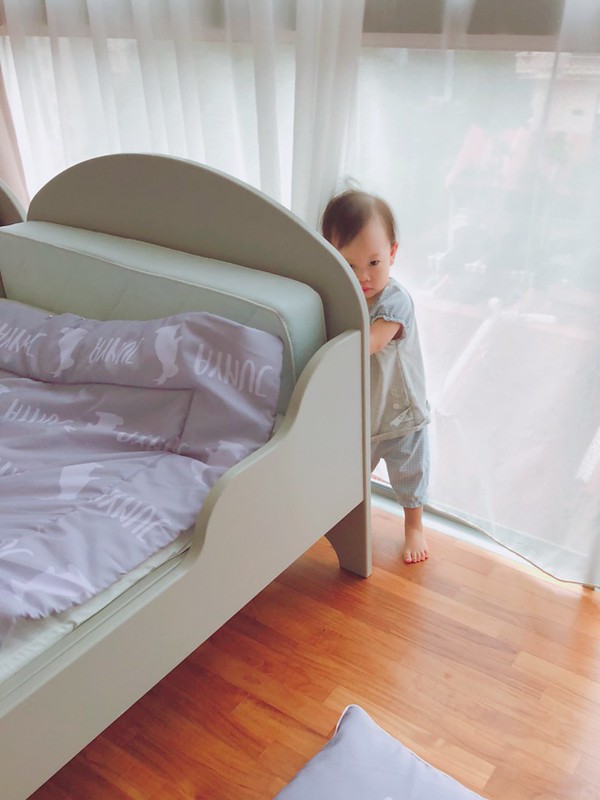 Told me “noh” and hid behind the bed for (whatever trivial reason that I forgot). 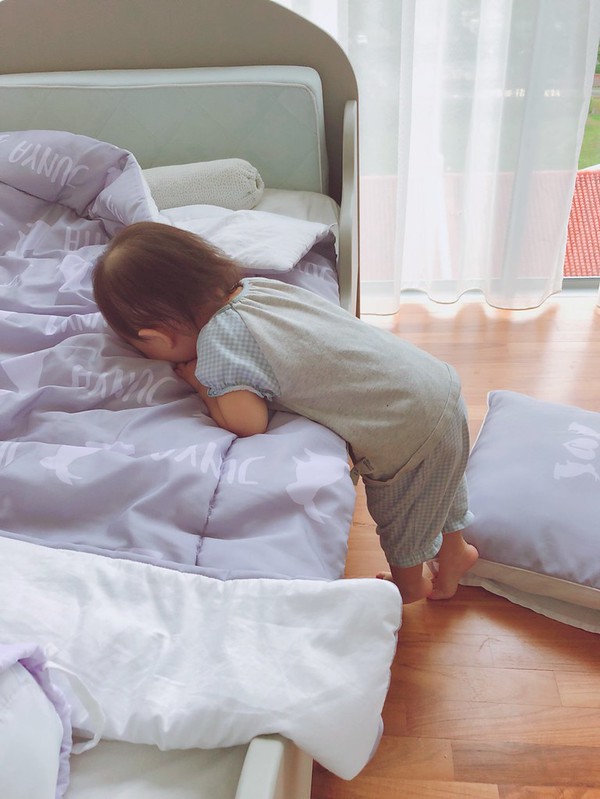 Planted her face in the bed to show her disappointment at how life’s treating her unfairly. 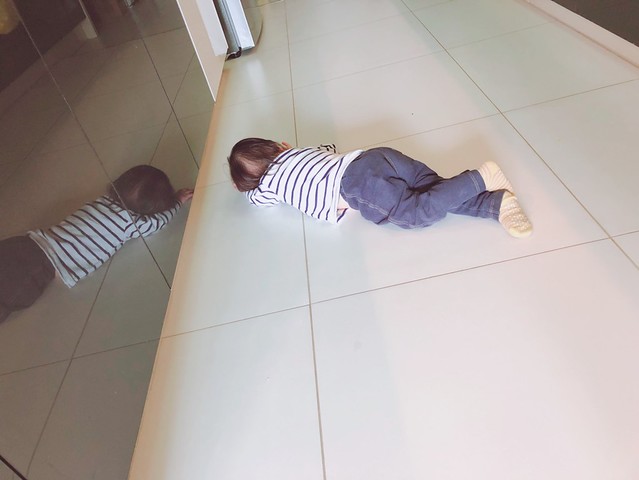 « Previous post
How to Self-drive in Japan – Japan Rental Car Tips
Next post »
#JapanQuality for Malaysia (and Singapore!)